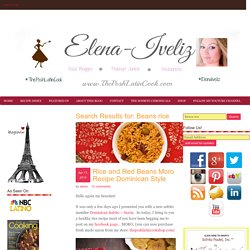 It was only a few days ago I presented you with a new sofrito member Dominican Sofrito – Sazón. So today, I bring to you a healthy rice recipe most of you have been begging me to post on my facebook page… MORO. (you can now purchase fresh made sazon from my store: theposhlatincookshop.com) Mmm… Moro is the most common dish within the Latino community. Dominicans are not the only Latinos that serve rice and beans, or make moro, the fact is this dish can be found on the table of just about EVERY Latino, South American and Caribbean table. The secret to this dish making this dish outstanding is using the freshest dried beans you can find. My mothers variation is Ecuadorian inspired, she calls it “My recipe, get your own” lol she literally told me that when I asked if I could share her recipe with you guys, because there is no other rice and bean recipe out there with her added ingredients, I will be posting that recipe in the days to come.

Let’s get started… Emiko Davies. Posted by Emiko on April 18, 2014 · 3 Comments While I love summer for its fruit, autumn for its earthy flavours and winter for hearty dishes, spring is my favourite time of year for vegetables – asparagus, broad beans, artichokes. 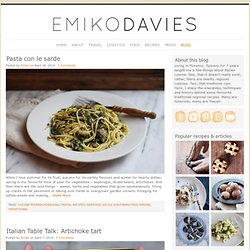 And then there are the wild things – weeds, herbs and vegetables that grow spontaneously, filling up cracks in the pavement or taking over fields or overgrown garden corners. Rustico Cooking - Abruzzo. Abruzzo is queen of handmade noodles. 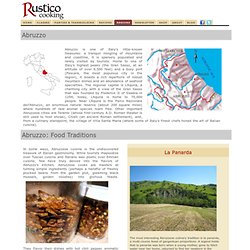 Pastas include fettuccine sauced with onion, parsley, basil, and Pecorino; spaghetti with garlic and chili, as in Molise; and vermicelli in a saffrony sauce infused with zucchini blossoms. Maccheroni alla chitarra, the region's proudest pasta, derive their name from the instrument (a wooden frame on which parallel strings are mounted) used to cut the pasta. Curried Quinoa Salad w/ Dried Cranberries & Toasted Almonds. For almost 6000 years, quinoa (pronounced keen-wa)—known as the sacred grain of the Incas—has been cultivated in the Andean mountain regions of Peru, Chile and Bolivia. 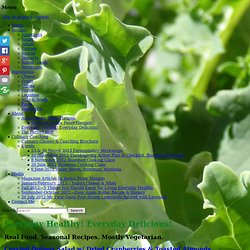 And yet quinoa is not a grain but rather the seeds of the fruit of a colorful broadleaf plant related to spinach, beets and chard. 2013 the International Year of QuinoaMoments ago while researching quinoa, I learned that in December of last year the United Nations declared 2013 the International Year of Quinoa as a way to “heighten public awareness of the nutritional, economic, environmental and cultural properties of quinoa.” Quinoa has also received the United Nations classification as a “super crop” due to its quite remarkable nutrient profile:

A Very Porky Pie. I am now officially 80% pork fat. 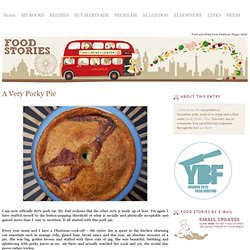 My Dad reckons that the other 20% is made up of beer. Yet again I have stuffed myself to the button-popping threshold of what is socially and physically acceptable and gained more than I care to mention. It all started with this pork pie. Every year mum and I have a Christmas cook-off – the entire day is spent in the kitchen churning out essentials such as sausage rolls, glazed ham, bread sauce and this year, an absolute monster of a pie. Spaghetti alla carbonara - briciole. Chicken & Chorizo Pie with Puff Pastry - Simply Delicious. Chicken pie is one of my ultimate comfort foods. 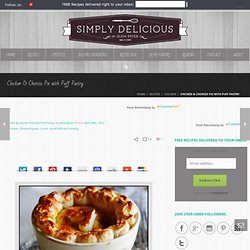 Probably because my gran made a killer chicken pie and always had an enormous one standing proudly amongst the roasts and delicious vegetable dishes for our Sunday lunches. My gran’s chicken pie was always something rather majestic. She made sure the edges were beautifully crimped but ensured me she did so in a casual manner; the filling was always rich and fragrant with hints of nutmeg, cloves and white pepper.

Chicken Pie Recipe - British Chicken, Leek and Mushroom Pie. There is something so comforting about a traditional British chicken pie with memories of school days and family lunches.

Like it's close cousin a Steak and Kidney Pie, British Chicken Pie is part of the fabric of British food. This chicken pie recipe is easy to make, and in a hurry, you can use ready made pastry. Using meat from the legs and thighs of the chicken not only gives a richer flavor, these cuts are also much cheaper. Don't be daunted by the lengthy instructions below, this is an easy pie to make and well worth the effort. The pie is delicious hot and equally good cold for a lunch box or picnic. Prep Time: 45 minutes Cook Time: 1 hour Total Time: 1 hour, 45 minutes Ingredients: Recipes - Aesthetics & Gastronomy. Best-Ever Veggie Burgers from Northstar Cafe Restaurant Reproduction.

Even before I'd been to the Northstar Cafe in Columbus, Ohio, I'd heard about their veggie burgers. 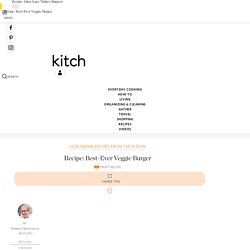 "They are unlike any other veggie burger you've ever had," I was promised by both vegetarians and non-vegetarians. I'll give you one guess what I ordered when I finally made it to the restaurant myself! This burger definitely lived up to expectations. It had a deep, savory umami flavor that contrasted nicely with a slice of provolone (I think) cheese, bitter greens, and the buttery toasted bun. I could see bits of beet, black bean, and brown rice in the mix, but no single ingredient overpowered the other. Moorish Paella recipe from food52. Author Notes: I love paella because it is a little more hearty and cozy than a lot of pasta dishes but just as versatile--you can pretty much fill the dish with whatever you have on hand. 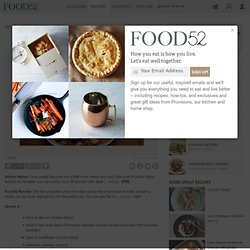 I came up with this recipe after a dinner party left me with a few lamb sausages, lots of spices and half a can of harissa I did not want to waste. - NWB (less)Author Notes: I love paella because it is a little more hearty and cozy than a lot of pasta dishes but just as versatile--you can pretty much fill the dish with what (…more) - NWB Food52 Review: The fun of paella is that it's a dish whose flavor you have to build, phase by phase, as you layer ingredients into the paella pan. You can see the dish darkening and intensifying as you move through the steps. Serves 4. Smitten kitchen. The Bitten Word. (Photos, clockwise from top left: Bar Pilar, Little Serow courtesy of The Washingtonian, Le Diplomate, Rose's Luxury) Here's something we've been meaning to do for years (literally years) on this blog: share our favorite places to eat in Washington, D.C. 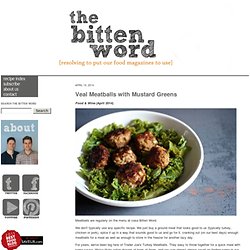 Our Nation's Capital is flooded with deliciousness these days. Over the years we've gladly answered readers' questions about where they should eat when they visit D.C. Right now, despite the chill in the air, Cherry Blossom season is upon us. We've gotten a few more of these questions than usual, so we're publishing this list. (Our list of favorite places to eat in D.C. is very District-centric. Come visit the District -- we promise you won't leave hungry!

Thomas Jefferson, purportedly a great lover of both cheese and Italian food, brought a macaroni maker back from Italy and served his baked macaroni and cheese at dinner parties. If you have ever managed to have a lucid thought while eating this gooey, delicious dish, it may have been to wonder how macaroni and cheese -- American cheese melted into a traditional British white sauce served over Italian pasta -- came about. It all started during the age of European colonization, when seafaring men transported dried macarone -- one of the few staples that could survive a year aboard ship -- from Italy to Britain and to the American colonies.

To begin, you still need to make a white sauce. The pasta will finish cooking as it bakes.