When is the Best Time to Sleep? So many articles have been written about the fact that adults need about 8 hours of sleep per night. 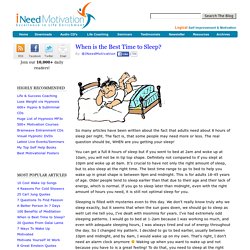 The fact is, that some people may need more or less. The real question should be, WHEN are you getting your sleep! You can get a full 8 hours of sleep but if you went to bed at 2am and woke up at 10am, you will not be in tip top shape. Definitely not compared to if you slept at 10pm and woke up at 6am. It’s crucial to have not only the right amount of sleep, but to also sleep at the right time. Sleeping is filled with mysteries even to this day. Waking up when you want to wake up and not because you have to is a great feeling! To help you get adequate sleep, don’t do anything too physically or mentally strenuous at least 2 hours before your bed time. Re-reading is inefficient. Here are 8 tips for studying smarter. The way most students study makes no sense. 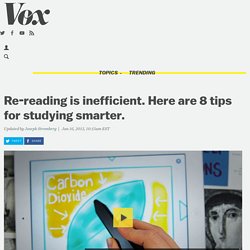 That's the conclusion of Washington University in St. Louis psychologists Henry Roediger and Mark McDaniel — who've spent a combined 80 years studying learning and memory, and recently distilled their findings with novelist Peter Brown in the book Make It Stick: The Science of Successful Learning. using active learning strategies is most effective The majority of students study by re-reading notes and textbooks — but the psychologists' research, both in lab experiments and of actual students in classes, shows this is a terrible way to learn material. Using active learning strategies — like flashcards, diagramming, and quizzing yourself — is much more effective, as is spacing out studying over time and mixing different topics together. McDaniel spoke with me about the eight key tips he'd share with students and teachers from his body of research. 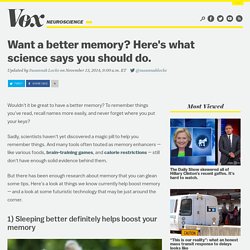 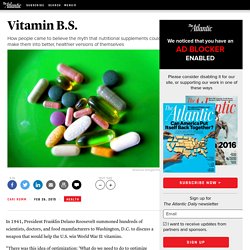 “There was this idea of optimization: ‘What do we need to do to optimize Americans’ health, to make sure we have enough pep and vigor to get us through this war?’” Said Catherine Price, the author of Vitamania: Our Obsessive Quest for Nutritional Perfection. “There were all these rumors that the Nazis were restricting vitamins in their conquered people’s foods and giving their young men vitamin supplements and basically race-building through vitamins.” Three ideas emerged from the National Nutrition Conference for Defense that still exist today. Four Lessons from “Inside Out” to Discuss With Kids. Since its release last month, Inside Out has been applauded by critics, adored by audiences, and has become the likely front-runner for the Academy Award for Best Animated Feature. 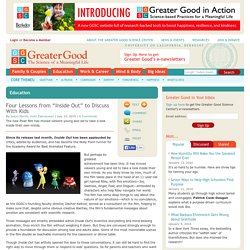 But perhaps its greatest achievement has been this: It has moved viewers young and old to take a look inside their own minds. As you likely know by now, much of the film takes place in the head of an 11-year-old girl named Riley, with five emotions—Joy, Sadness, Anger, Fear, and Disgust—embodied by characters who help Riley navigate her world. The film has some deep things to say about the nature of our emotions—which is no coincidence, as the GGSC’s founding faculty director, Dacher Keltner, served as a consultant on the film, helping to make sure that, despite some obvious creative liberties, the film’s fundamental messages about emotion are consistent with scientific research. The Best Greater Good Articles of 2015. For Greater Good, nuance and controversy defined 2015. 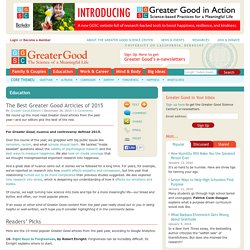 Over the course of the year, we grappled with big public issues like terrorism, racism, and what schools should teach. We tackled “inside baseball” questions about the validity of psychological research and the best ways to measure happiness. We also took on media coverage that we thought misrepresented important research into happiness.

And a great deal of nuance came out in stories we’ve followed for a long time. For years, for example, we’ve reported on research into how wealth affects empathy and compassion, but this year that relationship turned out to be more complicated than previous studies suggested. Of course, we kept turning new science into tools and tips for a more meaningful life—our bread and butter, and often, our most popular pieces. Don't forget, the science of memory is key to helping students learn. Since the dawn of time, learning and memory have gone together like bread and butter, up and down, spaghetti and meatballs. 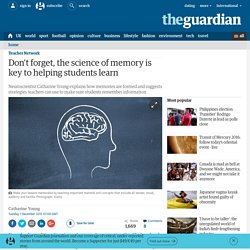 These two phenomena are so intricately linked that understanding the basics of how we remember can help teachers when designing lessons. So how do we form memories? Eight hours of sleep may not be necessary. Gut Check is a periodic look at health claims made by studies and by newsmakers. 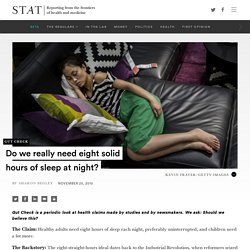 We ask: Should we believe this? The Claim: Healthy adults need eight hours of sleep each night, preferably uninterrupted, and children need a lot more. The Backstory: The eight-straight-hours ideal dates back to the Industrial Revolution, when reformers seized on the divisibility of 24 into three equal periods to recommend eight hours of work, eight of rest, and eight of sleep. That kept factory owners from demanding 14 hours of work, but it had no scientific basis. Rakesh Gupta's Shares. 8 Great Hacks to Sleep Better Tonight inc.com Save McDonald’s CEO Don Thompson : Chicago magazine : March 2015. 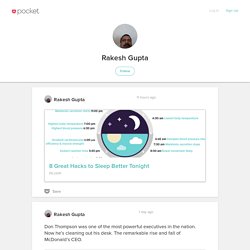 What Makes a Leader? Every businessperson knows a story about a highly intelligent, highly skilled executive who was promoted into a leadership position only to fail at the job. 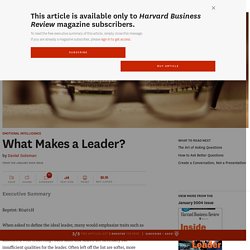 And they also know a story about someone with solid—but not extraordinary—intellectual abilities and technical skills who was promoted into a similar position and then soared. The Top 100 New York Times Stories of 2015, by Total Time Spent. Review: ‘Too Much of a Good Thing’ Finds a Dilemma in Our DNA. History and Memory in Syria. The Syrian uprising is on the verge of its fifth anniversary. To a great extent it has become the essential conflict of our times. Despite this – or perhaps because of it – the prospect of peace, despite some apparently encouraging signs from the United Nations, remains a chimera. Explicit cookie consent. A YEAR ago Narendra Modi came to office promising to bring India “good times”, by which he meant jobs, prosperity and international renown. His progress has been frustratingly slow. The problem is hardly a lack of opportunity. Voters gave his Bharatiya Janata Party (BJP) the biggest parliamentary mandate for change in 30 years.

Mr Modi has concentrated more power in his own hands than any prime minister in recent memory. The Economist’s editors pick the ten covers that define 2015. EVEN by the standards of the post-9/11 era, 2015 has been a exceptionally tumultuous year. In 2015 the war in Syria grew more fractious, Islamic State more militant and calculus of the Middle East more incomprehensible. Europe witnessed the largest migrant flows since the second world war, unprecendented terrorist attacks on ordinary Parisians and the continuing rise of Russian belligerence. In America, police violence, gun crime and the social-justice movement reached new heights. Latin America turned away from the populist left, emerging economies screeched to a halt and illiberal fearmongers continued to climb up the polls across the world.

Volkswagen was caught fiddling its emissions results, Silicon Valley giants began to lose some of their sheen and Sepp Blatter, the head of football's governing body, came under scrutiny for corruption. May 23rdNarendra Modi has concentrated more power in his own hands than any Indian prime minister in recent memory. Luck and the entrepreneur, part 1: The four kinds of luck. Aug 14, 2007 In the last few weeks, I've been reading huge stacks of books on the psychology of creativity and motivation -- which is the reason for the relative scarcity of substantive blog posts. Said post situation will be remedied shortly, by a series of posts on -- surprise! -- the psychology of creativity and motivation. But first, to complement my post on age and the entrepreneur from a few days ago, this post begins a series of occasional posts about luck and the entrepreneur.

Luck is something that every successful entrepreneur will tell you plays a huge role in the difference between success and failure. Best of 2015: Top Tips, Insights, & Tricks. 2015 has been good to the 99U community. Nobody Cares How Hard You Work. Conquering Digital Distraction. Sinan Koçaslan/iStockphoto. 15 best thought-provoking websites. Pakistan’s Endgame in Kashmir. Altitudes Of Imperialism. Off the Record – The Caravan. Among The Believers – The Caravan. Is Anyone Willing To Take On The Perversion of Islam Caused By The Wahhabi-Saudi Combine? – The Caravan. How They Got Here – The Caravan. NOT LONG AGO, I found myself in a panel discussion on television with three politicians. One was a Congress member of parliament, the second an MP from the Bharatiya Janata Party (BJP), the third the president of one of the smaller regional formations.

Talk Of the Town. Haryana’s Decision to Include the Bhagavad Gita in School Curriculum Skews the Idea of Education – The Caravan. The next academic session will bring a change in curriculum for school students in Haryana, who will now have to study shlokas from the Bhagavad Gita as part of their syllabus. This move comes shortly after external affairs minister Sushma Swaraj called for the Gita to be declared a national holy book. Prime Minister Narendra Modi presented a copy of the book to US president Barack Obama on his maiden visit to the United States and to Japan’s Emperor Akihito last September.