Cash No Longer King: Europe Moves to Begin Elimination of Paper Money. (ANTIMEDIA) — In the shadow of Donald Trump’s spree of controversial actions, the European commission has quietly launched the next offensive in the war on cash. 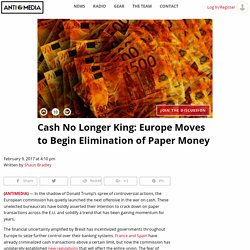 These unelected bureaucrats have boldly asserted their intention to crack down on paper transactions across the E.U. and solidify a trend that has been gaining momentum for years. The financial uncertainty amplified by Brexit has incentivized governments throughout Europe to seize further control over their banking systems. France and Spain have already criminalized cash transactions above a certain limit, but now the commission has unilaterally established new regulations that will affect the entire union. The fear of physical money flowing out of the trade bloc has manifested a draconian response from the State.

The European Action Plan doesn’t mention a specific dollar amount for restrictions, but as expected, their reasoning for the move is to thwart money laundering and the financing of terrorism. Future of the $100 note up for grabs as government targets cash. The Turnbull government is to consider a ban on the $100 note and a crackdown on all but small cash payments as part of an assault on the cash economy to be unveiled in Monday's mid-year budget update. 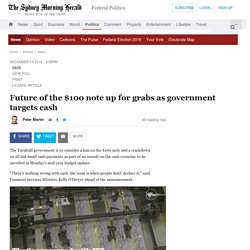 "There's nothing wrong with cash, the issue is when people don't declare it," said Financial Services Minister Kelly O'Dwyer ahead of the announcement. This is a modal window. This modal can be closed by pressing the Escape key or activating the close button. Captions Settings Dialog Beginning of dialog window. Bellamy's faces sour milk Future uncertain for $100 note. Tap Into the Mobile Payments Revolution. The trends and contenders that are shaping mobile payments. 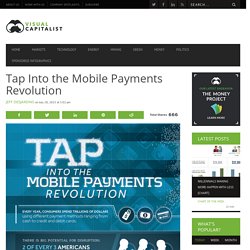 Thanks to Purefunds Mobile Payments ETF (IPAY) for helping us put this together. Yesterday, user-friendly payment processor Stripe announced a strategic investment and partnership from Visa that values the company at $5 billion. Other investors that participated are not unknowns either: Kleiner Perkins Caufield Byers, American Express, and Sequoia. It was only in December that Stripe was valued at $3.5 billion and in their previous financing, they were valued at just half of that.

Stripe will use Visa’s international connections to help it expand beyond the 20 countries it currently services. This type of story is not unusual in the payment space. The Shift to a Cashless Society is Snowballing. Love it or hate it, cash is playing an increasingly less important role in society. 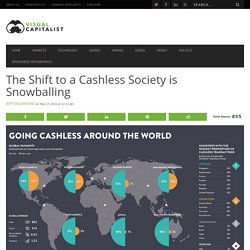 In some ways this is great news for consumers. The rise of mobile and electronic payments means faster, convenient, and more efficient purchases in most instances. New technologies are being built and improved to facilitate these transactions, and improving security is also a priority for many payment providers. Government Plan Would Transform Israel Into The World’s First Cashless Society. Will Israel be the first cashless society on the entire planet? 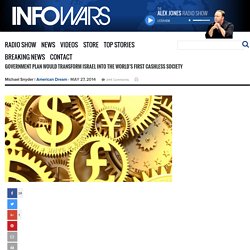 A committee chaired by Israeli Prime Minister Benjamin Netanyahu’s chief of staff has come up with a three phase plan to “all but do away with cash transactions in Israel”. Individuals and businesses would still be permitted to conduct cash transactions in small amounts (at least initially), but the eventual goal is to force Israeli citizens to conduct as much business as possible using electronic forms of payment.

In fact, it has been reported that Israeli officials believe that “cash is bad” because it fuels the underground economy and allows people to avoid paying taxes. Ban cash, end boom and bust. This may all sound far-fetched, but the idea has been developed in some detail by a Norwegian academic, Trond Andresen*. • Get the best investing ideas from Telegraph Investor once a week by email • Get sent the best of Telegraph Money once a week by email In this futuristic world, all payments are made by contactless card, mobile phone apps or other electronic means, while notes and coins are abolished. 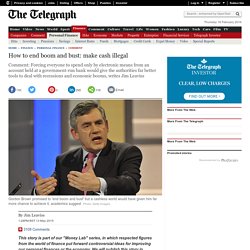 Your current account will no longer be held with a bank, but with the government or the central bank. Banks still exist, and still lend money, but they get their funds from the central bank, not from depositors. Having everyone’s account at a single, central institution allows the authorities to either encourage or discourage people to spend. Faced with seeing their money slowly confiscated, people are more likely to spend it on goods and services. Feds Urge Banks to Call Cops on Customers Who Withdraw $5,000 or More. The Justice Department is ordering bank employees to consider calling the cops on customers who withdraw $5,000 dollars or more, a chilling example of how the war on cash is intensifying. 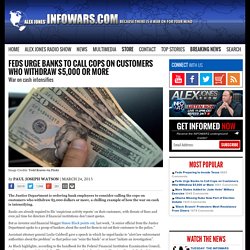 Banks are already required to file ‘suspicious activity reports’ on their customers, with threats of fines and even jail time for directors if financial institutions don’t meet quotas. But as investor and financial blogger Simon Black points out, last week, “A senior official from the Justice Department spoke to a group of bankers about the need for them to rat out their customers to the police.” Assistant attorney general Leslie Caldwell gave a speech in which he urged banks to “alert law enforcement authorities about the problem” so that police can “seize the funds” or at least “initiate an investigation”.