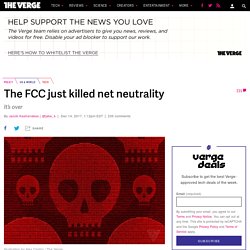 In a 3-2 vote today, the Federal Communications Commission approved a measure to remove the tough net neutrality rules it put in place just two years ago. Those rules prevented internet providers from blocking and throttling traffic and offering paid fast lanes. They also classified internet providers as Title II common carriers in order to give the measure strong legal backing.

Today’s vote undoes all of that. It removes the Title II designation, preventing the FCC from putting tough net neutrality rules in place even if it wanted to. Opponents of net neutrality argue that the rules were never needed in the first place, because the internet has been doing just fine. Read the dissenting statements of the Democratic FCC commissioners Supporters of net neutrality have long argued that, without these rules, internet providers will be able to control traffic in all kinds of anti-competitive ways. “​This is not good,” Rosenworcel says. FCC to Seize Entire Internet, Cable Spectrum Under 400-Page “Rules” FCC cherry picking existing laws for cable, radio & broadband to regulate Internet Kit Daniels Prison Planet.com March 13, 2015 The FCC is combining several separate sections of telecommunications law developed for radio, cable TV and broadband access for a regulatory takeover of the Internet and is enforcing it with the same rules and methods as the Justice Department, according to its 400-page report released Thursday. 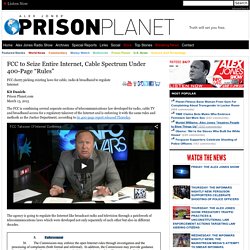 The Truth About 'Net Neutrality' How the ‘John Oliver Effect’ Is Having a Real-Life Impact. Comedians mock our cultural and political institutions on TV all the time. 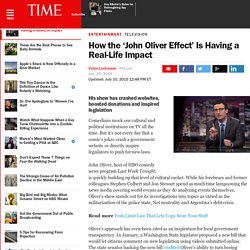 But it’s not every day that a comic’s jokes crash a government website or directly inspire legislators to push for new laws. John Oliver, host of HBO comedy news program Last Week Tonight, is quickly building up that level of cultural cachet. While his forebears and former colleagues Stephen Colbert and Jon Stewart spend as much time lampooning the news media covering world events as they do analyzing events themselves, Oliver’s show stands out for its investigations into topics as varied as the militarization of the police state, Net neutrality and Argentina’s debt crisis. Read more Feds Limit Law That Lets Cops Seize Your Stuff Oliver’s approach has even been cited as an inspiration for local government transparency.

But the show has long caused real-world ripples. Ending Unfair Bail Requirements Eviscerating FIFA. FCC Chairman Sold Out The Internet. Network Neutrality Overview. Net Neutrality (HBO) FCC Backs Fast Lanes for Web Traffic. Photo WASHINGTON — The principle that all Internet content should be treated equally as it flows through cables and pipes to consumers looks all but dead. 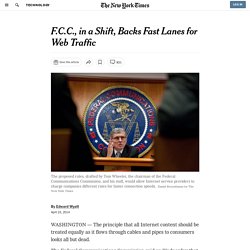 The Federal Communications Commission said on Wednesday that it would propose new rules that allow companies like Disney, Google or Netflix to pay Internet service providers like Comcast and Verizon for special, faster lanes to send video and other content to their customers. The proposed changes would affect what is known as net neutrality — the idea that no providers of legal Internet content should face discrimination in providing offerings to consumers, and that users should have equal access to see any legal content they choose. The proposal comes three months after a federal appeals court struck down, for the second time, agency rules intended to guarantee a free and open Internet. Continue reading the main story OPEN Document Document: Appeals Court Opinion Rejecting F.C.C. 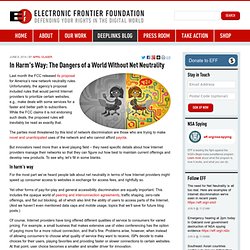 Unfortunately, the agency’s proposal included rules that would permit Internet providers to prioritize certain websites, e.g., make deals with some services for a faster and better path to subscribers. While the FCC claims it is not endorsing such deals, the proposed rules will inevitably be read as exactly that. The parties most threatened by this kind of network discrimination are those who are trying to make novel and unanticipated uses of the network and who cannot afford payola.

But innovators need more than a level playing field – they need specific details about how Internet providers manage their networks so that they can figure out how best to maintain current offerings and develop new products. To see why, let’s fill in some blanks. In harm’s way Yet other forms of pay-for-play and general accessibility discrimination are equally important. Learning from past. OpenMedia International. Save the Internet! Article in globalresearch By Kevin Zeese and Margaret Flowers To ensure the Internet is open to all on an equal basis we must act now to prevent mega-corporations from destroying Internet Freedom Update: Actions every day starting on Wednesday, May 7th, at noon and 5 pm. 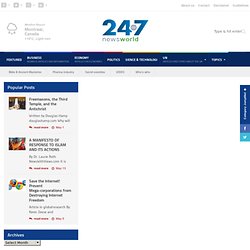 To Save The Internet, we are building a People’s Firewall against the FCC’s proposed rule that will create a ‘pay to play’ Internet by ending net neutrality. The FCC is located at 445 12th Street, SW, Washington, DC 20554. If we act NOW, we can ensure a free, open and equal Internet for the 21st Century. To ensure the Internet we want, we must take action today; and people need to plan to come to Washington, DC beginning next Wednesday to join in a series of escalating protests that will undermine the legitimacy of the FCC leadership and force them to pay attention to the public interest rather than the interests of mega-corporations.

The FCC is being Driven off Track What Should Be Done? John Nichols writes in the Nation: