Why picky eaters are the new normal. Puntarelle is a variety of chicory that is much loved in Rome, and pretty hard to come by everywhere else. 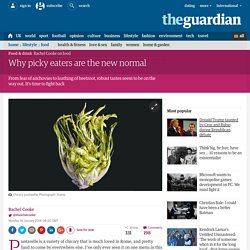 I’ve only ever seen it on one menu in this country – you used sometimes to be able to order it at Orso in Covent Garden – and I’ve never spotted it piled beside the purslane and peppergrass at a farmers’ market. But I’m lucky. From November until February, which is as long as the season lasts, it’s often to be found at my local greengrocer – a shop so crazily modish in the matter of vegetables, it once appeared in the pages of Vogue. Can changing your mealtimes make you healthier? Image copyright iStock Many people want to eat more healthily but find it difficult to change their diet. 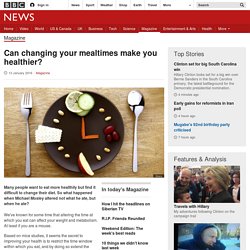 So what happened when Michael Mosley altered not what he ate, but when he ate? We've known for some time that altering the time at which you eat can affect your weight and metabolism. At least if you are a mouse. Based on mice studies, it seems the secret to improving your health is to restrict the time window within which you eat, and by doing so extend the amount of time you go without food. In a more recent study the same researchers again subjected hundreds of mice to different lengths of daily fasts, ranging from 12 to 15 hours. Image copyright Science Photo Library But how well would this work in humans?

His team measured the volunteers' body fat, blood sugar levels, blood fat (triglycerides) and cholesterol levels at the start of the study. Find out more Take the test: When should I eat my main meal? I asked 8 researchers why the science of nutrition is so messy. Here’s what they said. There was a time, in the distant past, when studying nutrition was a relatively simple science. 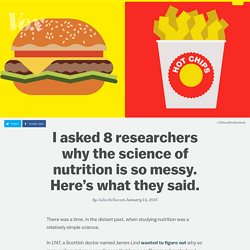 In 1747, a Scottish doctor named James Lind wanted to figure out why so many sailors got scurvy, a disease that leaves sufferers exhausted and anemic, with bloody gums and missing teeth. So Lind took 12 scurvy patients and ran the first modern clinical trial. The sailors were divided into six groups, each given a different treatment. The men who ate oranges and lemons eventually recovered — a striking result that pointed to vitamin C deficiency as the culprit. This sort of nutritional puzzle solving was common in the pre-industrial era. Unfortunately, studying nutrition is no longer that simple. Today, our greatest health problems relate to overeating.

These 5 Life-Changing Superfoods Will Get You Through Winter. Kale and açai have been the superfood forerunners for years now, but it’s about time that the superfood smoothie gets a makeover. 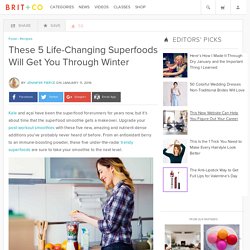 Upgrade your post-workout smoothies with these five new, amazing and nutrient-dense additions you’ve probably never heard of before. From an antioxidant berry to an immune-boosting powder, these five under-the-radar trendy superfoods are sure to take your smoothie to the next level. Super Foods You Need to Know About 1. Moringa: Whether you choose the raw leafy greens or the greens powder, your next smoothie will be nurturing your body on the cellular level with an injection of A, B and C vitamins. New app shows how many cubes of sugar are in your favourite foods. LONDON — We've long been told that dangerous amounts of sugar lurk in some of our favourite food and drinks, and now a new app will let you know exactly how much you might be inadvertently consuming. 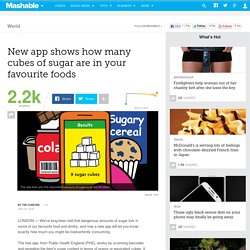 The free app, from Public Health England (PHE), works by scanning barcodes and revealing the item's sugar content in terms of grams or equivalent cubes. It can be used on more than 75,000 products. The app, which has been released as part of PHE's Change4Life advertising campaign, is available on the Apple App Store or Google Play. PHE are hoping parents will use the app to steer their kids away from high sugar products, opting for healthier alternatives instead and helping to reduce tooth decay, obesity and type two diabetes.

Young children are consuming three times more than the recommended amount of sugar, PHE say, with 30% of the sugar in kids diets coming from sugary drinks including pop, juices, squashes and energy drinks. Image: PHE/Mashable composite. Forget Weight Watchers, Paleo, and Dry January: Let Michael Pollan and 'Bon Appetit' Preach the Virtues of Eating 'Healthy-ish’ Abstinence, we are usually told around this time of year, makes the heart grow stronger. 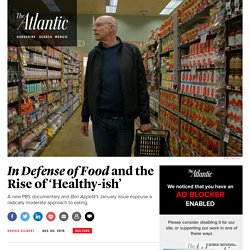 It’s why Dry January, which started in the green and pleasantly alcoholic land of Britain a few years ago before reaching the U.S., is increasingly being touted as a good and worthy thing to do, and why so many people are currently making plans to remove whole food groups from their diet: carbs, fat, Terry’s Chocolate Oranges. The key to health, books and websites and dietitians and former presidents reveal, is a process of elimination. It’s going without. It’s getting through the darkest, coldest month of the year without so much as a snifter of antioxidant-rich Cabernet.