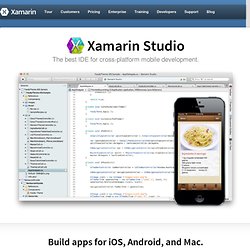 Unified search lets you quickly find any file, type, member or command. Results are sorted and annotated so you find what you’re looking for quickly. Powerful Debugging Support Debugging pads appear as needed to help you watch your code, control breakpoints and visualize threads. Mac and Windows Xamarin Studio is available for both OS X and Windows. Component Store Extend your apps directly from Xamarin Studio, adding functionality and themes with a few clicks.

CustomBlocks - blockly - Overview of creating custom blocks. - A visual programming editor. This document is aimed at developers who wish to create new blocks within Blockly. 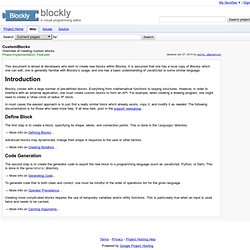 It is assumed that one has a local copy of Blockly which one can edit, one is generally familiar with Blockly's usage, and one has a basic understanding of JavaScript or some similar language. Blockly comes with a large number of pre-defined blocks. Everything from mathematical functions to looping structures. However, in order to interface with an external application, one must create custom blocks to form an API. For example, when creating a drawing program, one might need to create a "draw circle of radius R" block.

In most cases the easiest approach is to just find a really similar block which already exists, copy it, and modify it as needed. Define Block The first step is to create a block; specifying its shape, labels, and connection points. . → More info on Defining Blocks... Advanced blocks may dynamically change their shape in response to the user or other factors. → More info on Creating Mutators... CreatingMutators - blockly - Make blocks deeply configurable. - A visual programming editor. Creating Custom Blocks: Defining a Block: Creating Mutators Advanced blocks may use a mutator to be even more dynamic and configurable. 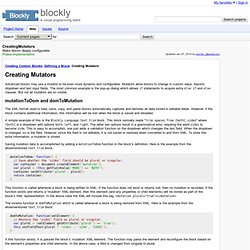 Mutators allow blocks to change in custom ways, beyond dropdown and text input fields. The most common example is the pop-up dialog which allows if statements to acquire extra else if and else clauses. But not all mutators are so visible. mutationToDom and domToMutation The XML format used to load, save, copy, and paste blocks automatically captures and restores all data stored in editable fields.

A simple example of this is the Blockly.Language.text_trim block. Blockly : Block Factory. MIT App Inventor. Setting Up App Inventor 2. You can set up App Inventor and start building apps in minutes. 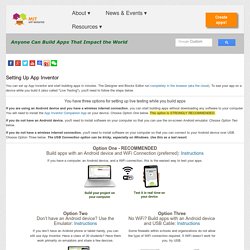 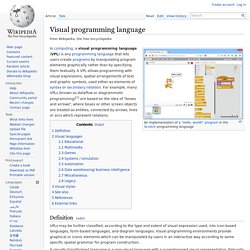 A VPL allows programming with visual expressions, spatial arrangements of text and graphic symbols, used either as elements of syntax or secondary notation. For example, many VPLs (known as dataflow or diagrammatic programming)[1] are based on the idea of "boxes and arrows", where boxes or other screen objects are treated as entities, connected by arrows, lines or arcs which represent relations. Definition[edit] VPLs may be further classified, according to the type and extent of visual expression used, into icon-based languages, form-based languages, and diagram languages. Visual programming environments provide graphical or iconic elements which can be manipulated by users in an interactive way according to some specific spatial grammar for program construction.