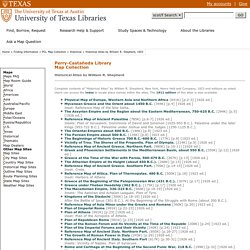 Shepherd Complete contents of "Historical Atlas" by William R. Shepherd, New York, Henry Holt and Company, 1923 and editions as noted. Users can access the index to locate place names within the atlas. The 1911 edition of this atlas is also available. Index. Litter. A History of Transportation. By Tim Lambert Ancient Transportation The first form of transport was, of course, Shanks pony (the human foot!). 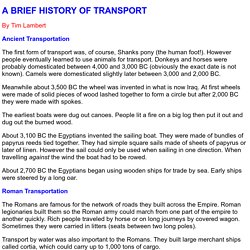 However people eventually learned to use animals for transport. Early Sailing Ships. Index Note: I got interested in the history of sail while transcribing the letters of a Swiss relative who died in Shanghai in 1902 while working for a European silk importer and I wondered how long it took his letters to reach home. 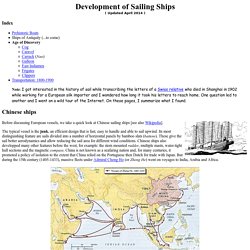 One question led to another and I went on a wild tour of the Internet. On these pages, I summarize what I found. Chinese ships. 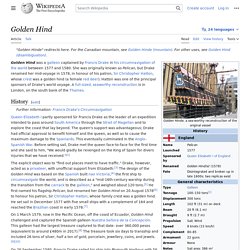 " Drake, however, acted as a privateer, with unofficial support from Queen Elizabeth.[2] She is described as a "mid-16th-century warship during the transition from the carrack to the galleon," and displaced about 100 tons.[3] He first named his flagship Pelican, but renamed her Golden Hind on 20 August 1578[4] to honour his patron, Sir Christopher Hatton, whose family crest was a golden hind. He set sail in December 1577 with five small ships, manned by 164 men, and reached the Brazilian coast in early 1578.[5] On 26 September 1580, Francis Drake sailed his ship into Plymouth Harbour with 56 of the original crew of 80 left aboard. After Drake's circumnavigation, Golden Hind was maintained for public exhibition at the dockyard at Deptford, London.

A table, known as the cupboard, in the Middle Temple Hall, London is also reputed to have been made from the wood of Golden Hind. 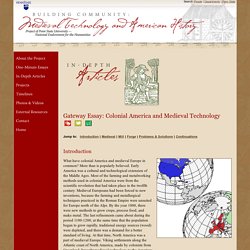 More than is popularly believed. Early America was a cultural and technological extension of the Middle Ages. Most of the farming and metalworking methods used in colonial America were from the scientific revolution that had taken place in the twelfth century. Moving ahead six centuries, there were later, and more successful, colonies. Medieval America European settlement of North America began in the Middle Ages and continued sporadically for centuries. Emigration to North America was one aspect of the movement of peoples around the Atlantic Ocean that had led the Vikings to Greenland and Canada or the English to New England and Virginia. The farmstead at L'Anse aux Meadows reveals a typically medieval configuration with homes, barns, livestock pens, and, significantly, ironworking at a smithy. Claimant to English and Scottish thrones. Cotton Mather. Six Oldest Libraries in New England. Share Tweet Email Identifying New England’s oldest libraries is no easy task, as the first colonists valued literacy and education for boys and girls. 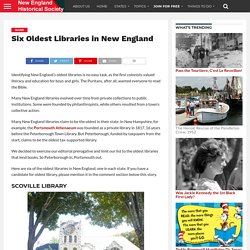 The Puritans, after all, wanted everyone to read the Bible. Many New England libraries evolved over time from private collections to public institutions. Cotton gin. "The First Cotton Gin", an engraving from Harper's Magazine, 1869. 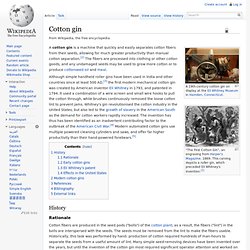 This carving depicts a roller gin, which preceded Eli Whitney's invention.[1] A cotton gin is a machine that quickly and easily separates cotton fibers from their seeds, allowing for much greater productivity than manual cotton separation.[2] The fibers are processed into clothing or other cotton goods, and any undamaged seeds may be used to grow more cotton or to produce cottonseed oil and meal. Although simple handheld roller gins have been used in India and other countries since at least 500 AD,[3] the first modern mechanical cotton gin was created by American inventor Eli Whitney in 1793, and patented in 1794. It used a combination of a wire screen and small wire hooks to pull the cotton through, while brushes continuously removed the loose cotton lint to prevent jams. 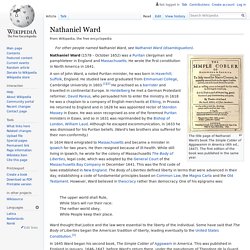 The first edition of the book was published in the same year. Nathaniel Ward (1578 – October 1652) was a Puritan clergyman and pamphleteer in England and Massachusetts.