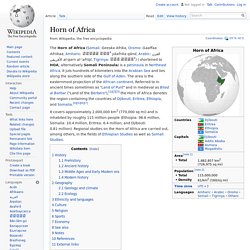 Regional studies on the Horn of Africa are carried out, among others, in the fields of Ethiopian Studies as well as Somali Studies. History[edit] Prehistory[edit] Main articles: Laas Geel and Dhambalin Shell middens 125,000 years old have been found in Eritrea,[8] indicating the diet of early humans included seafood obtained by beachcombing. According to both genetic and fossil evidence, archaic Homo sapiens evolved to anatomically modern humans solely in Africa between 200,000 and 100,000 years ago.

Today at the Bab-el-Mandeb straits the Red Sea is about 12 miles (20 kilometres) wide, but 50,000 years ago it was much narrower and sea levels were 70 meters lower. Ancient history[edit] Dʿmt was a kingdom located in Eritrea and northern Ethiopia that existed during the 8th and 7th centuries BCE. Basque language. Family transmission of Basque language (Basque as initial language) Percentage of students registered in Basque language schools (2000–2005). 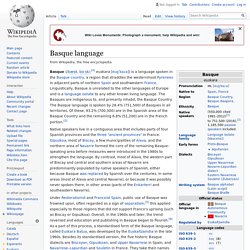 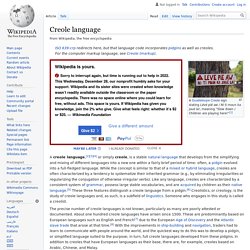 , meaning "Slow down / Children are playing here! " Phoneme. A phoneme is a basic unit of a language's phonology, which is combined with other phonemes to form meaningful units such as words or morphemes. 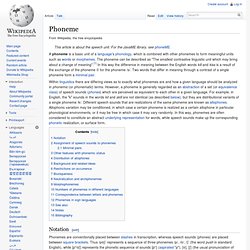 The phoneme can be described as "The smallest contrastive linguistic unit which may bring about a change of meaning". In this way the difference in meaning between the English words kill and kiss is a result of the exchange of the phoneme /l/ for the phoneme /s/. Two words that differ in meaning through a contrast of a single phoneme form a minimal pair. Notation[edit] The symbols used for particular phonemes are often taken from the International Phonetic Alphabet (IPA), the same set of symbols that are most commonly used for phones. Natural class. In phonology, a natural class is a set of phonemes in a language that share certain distinctive features.[1] A natural class is determined by participation in shared phonological processes, described using the minimum number of features necessary for descriptive adequacy. 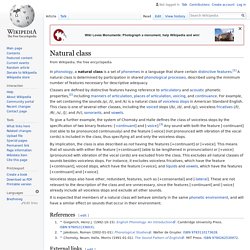 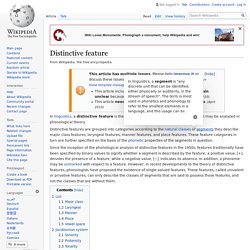 Since the inception of the phonological analysis of distinctive features in the 1950s, features traditionally have been specified by binary values to signify whether a segment is described by the feature; a positive value, [+], denotes the presence of a feature, while a negative value, [−], indicates its absence. In addition, a phoneme may be unmarked with respect to a feature. However, in recent developments to the theory of distinctive features, phonologists have proposed the existence of single-valued features. These features, called univalent or privative features, can only describe the classes of segments that are said to possess those features, and not the classes that are without them. Phonetic transcription.

Versus orthography[edit] The pronunciation of words in many languages, as distinct from their written form (orthography), has undergone significant change over time. 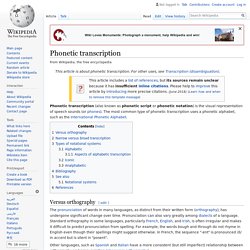 Pronunciation can also vary greatly among dialects of a language. Standard orthography in some languages, particularly French, English, and Irish, is often irregular and makes it difficult to predict pronunciation from spelling. For example, the words bough and through do not rhyme in English even though their spellings might suggest otherwise. Phonology. Phonology also includes the study of equivalent organizational systems in sign languages. 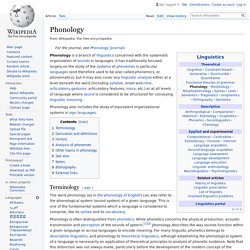 Terminology[edit] The word phonology (as in the phonology of English) can also refer to the phonological system (sound system) of a given language. This is one of the fundamental systems which a language is considered to comprise, like its syntax and its vocabulary. Phonology is often distinguished from phonetics. Morphophonology. Morphophonemes and morphophonological rules[edit] An example of a morphophonological alternation in English is provided by the plural morpheme, written as "-s" or "-es". 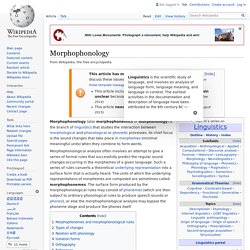 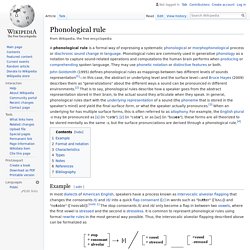 Phonological rules are commonly used in generative phonology as a notation to capture sound-related operations and computations the human brain performs when producing or comprehending spoken language. They may use phonetic notation or distinctive features or both. John Eliot. From Wikipedia, the free encyclopedia Jump to navigationJump to search John Eliot may refer to: Geneva Bible. Massachusett language. The Massachusett language is an Algonquian language of the Algic language family, formerly spoken by several peoples of eastern coastal and south-eastern Massachusetts and currently, in its revived form, in four communities of Wampanoag people. Puritans. Subclass of English Reformed Protestants The Puritans were English Protestants in the 16th and 17th centuries, who sought to purify the Church of England of Roman Catholic practices, maintaining that the Church of England had not been fully reformed and needed to become more protestant.[1] Puritanism played a significant role in English history, especially during the Protectorate.

It is generally estimated to have been spoken around 2,500 to 3,000 years ago, but on the question of where it was spoken, there is less agreement. Yurok language. Rocky Mountains. Algic languages. Algonquian languages. Saint Lawrence River. Algonquian peoples. Algonquin. Algonquin or Algonquian—and the variation Algonki(a)n—may refer to: Creole language. Languages of North America. The languages of North America reflect not only that continent's indigenous peoples, but the European colonization as well. Equator. Northern Hemisphere. Americas. Cacán language. Gutian language. Extinct language. Language contact. Unclassified language. Indigenous languages of the Americas. Language isolate. Bay of Biscay. Pyrenees. Basque language. Basque language, alphabet and pronunciation. Guardafui Channel. Ethiopian Studies. Somali studies. Horn of Africa.