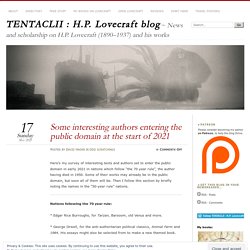 Some of their works may already be in the public domain, but soon all of them will be. Then I follow this section by briefly noting the names in the “50-year rule” nations. Nations following the 70 year rule: * Edgar Rice Burroughs, for Tarzan, Barsoom, old Venus and more. * George Orwell, for the anti-authoritarian political classics, Animal Farm and 1984. . * Olaf Stapledon, ground-breaking British science-fiction author. . * Ernest Haycox, an extremely prolific and popular author of what appear to be romping quality westerns and revolutionary war adventures, featuring tough and robust characters who live by their own rules. . * Rafael Sabatini, a prolific English-Italian writer of historical adventure and mystery novels. 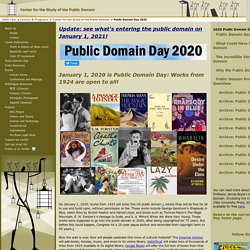 January 1, 2020 is Public Domain Day: Works from 1924 are open to all! On January 1, 2020, works from 1924 will enter the US public domain,1 where they will be free for all to use and build upon, without permission or fee. These works include George Gershwin’s Rhapsody in Blue, silent films by Buster Keaton and Harold Lloyd, and books such as Thomas Mann’s The Magic Mountain, E. M. Forster’s A Passage to India, and A. Now the wait is over. It's Yours Now: 2020 Public Domain Books.

The end of every year brings with it a few things: holidays, changes in weather, gift giving (or not), and news of what’s hitting the public domain in the coming year. 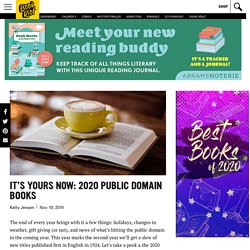 This year marks the second year we’ll get a slew of new titles published first in English in 1924. Let’s take a peek a the 2020 public domain books and get excited about the possibilities that exist for these titles. Before that, a primer on the public domain. 2020 marks the second year that January 1 means we receive new titles into the public domain. It used to happen annually, but in 1998, the Copyright Term Extension Act added 20 years to all copyright. The public domain means that material belongs to the general public. Book Deals Newsletter Sign up for our Book Deals newsletter and get up to 80% off books you actually want to read. 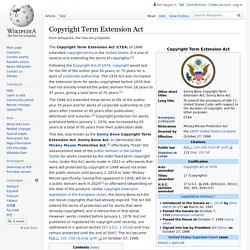 It is one of several acts extending the terms of copyrights.[1] Following the Copyright Act of 1976, copyright would last for the life of the author plus 50 years, or 75 years for a work of corporate authorship. The 1976 Act also increased the extension term for works copyrighted before 1978 that had not already entered the public domain from 28 years to 47 years, giving a total term of 75 years.[2] The 1998 Act extended these terms to life of the author plus 70 years and for works of corporate authorship to 120 years after creation or 95 years after publication, whichever end is earlier.[3] Copyright protection for works published before January 1, 1978, was increased by 20 years to a total of 95 years from their publication date. Background[edit] Political climate[edit] VII. How do I figure out if something is copyright protected or public domain?

Data-mining reveals that 80% of books published 1924-63 never had their copyrights renewed and are now in the public domain. This January, we celebrated the Grand Re-Opening of the Public Domain, as the onerous terms of the hateful Sonny Bono Copyright Act finally developed a leak, putting all works produced in 1923 into the public domain, with more to follow every year — 1924 goes PD in 2020, and then 1925, etc. 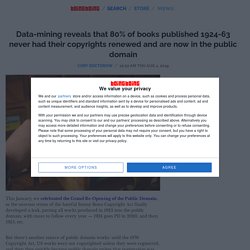 But there's another source of public domain works: until the 1976 Copyright Act, US works were not copyrighted unless they were registered, and then they quickly became public domain unless that registration was renewed. The problem has been to figure out which of these works were in the public domain, because the US Copyright Office's records were not organized in a way that made it possible to easily cross-check a work with its registration and renewal. For many years, the Internet Archive has hosted an archive of registration records, which were partially machine-readable. "Fun facts" are, sadly, often less than fun. Secretly Public Domain [Leonard Richardson/Crummy] (via Four Short Links)