Disney’s War Against the Counterculture. Draw a mouse, go to jail. 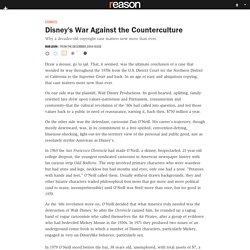 That, it seemed, was the ultimate conclusion of a case that wended its way throughout the 1970s from the U.S. District Court for the Northern District of California to the Supreme Court and back. In an age of easy and ubiquitous copying, that case matters more now than ever. On one side was the plaintiff, Walt Disney Productions. Its good-hearted, uplifting, family-oriented fare drew upon values–patriotism and Puritanism, consumerism and conformity–that the cultural revolution of the '60s had called into question, and fed those values back to a public in need of reassurance, earning it, back then, $750 million a year. Toussaint Legacy Act would outlaw use of deceased celebrities' name, image without consent. BATON ROUGE — A House committee approved a bill that would enact the Allen Toussaint Legacy Act, outlawing the use of a deceased individual’s name, image and likeness without the consent of the individual’s family or representative. 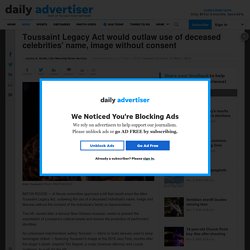 The bill, named after a famous New Orleans musician, seeks to prevent the exploitation of Louisiana’s cultural assets and ensure the protection of performers’ identities. An unlicensed merchandiser selling “koozies” — fabric or foam sleeves used to keep beverages chilled — featuring Toussaint’s image at the 2016 Jazz Fest, months after the singer’s death, inspired Tim Kappel, a music business attorney and Loyola professor, to push for the bill.

Currently, Louisiana does not protect the publicity rights of a deceased individual, so Toussaint’s family did not receive any benefit from the merchandiser. This bill, which has been debated since 2017, seeks to change that. Rep. Secondary liability. Secondary liability, or indirect infringement, arises when a party materially contributes to, facilitates, induces, or is otherwise responsible for directly infringing acts carried out by another party. 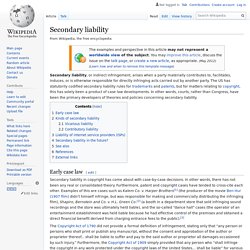 The US has statutorily codified secondary liability rules for trademarks and patents, but for matters relating to copyright, this has solely been a product of case law developments. In other words, courts, rather than Congress, have been the primary developers of theories and policies concerning secondary liability. Early case law[edit] The Copyright Act of 1790 did not provide a formal definition of infringement, stating only that “any person or persons who shall print or publish any manuscript, without the consent and approbation of the author or proprietor thereof... shall be liable to suffer and pay to the said author or proprietor all damages occasioned by such injury.” 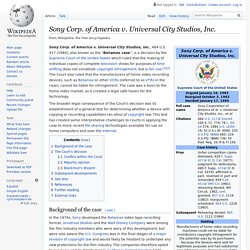 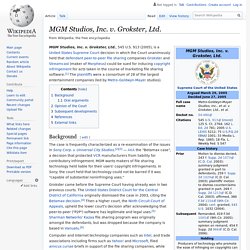 Universal City Studios.[2][3] — AKA the "Betamax case", a decision that protected VCR manufacturers from liability for contributory infringement. MGM wants makers of file sharing technology held liable for their users' copyright infringements. In Sony, the court held that technology could not be barred if it was "capable of substantial noninfringing uses. " Shapiro, Bernstein and Co. v. H.L. Green Co. Shapiro, Bernstein and Co. v. 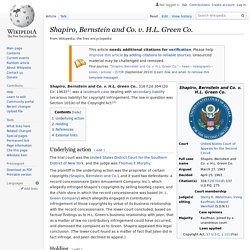 H.L. Green Co., 316 F.2d 304 (2d Cir. 1963)[1], was a landmark case dealing with secondary liability (vicarious liability) for copyright infringement. The law in question was Section 101(e) of the Copyright Act.[2] Underlying action[edit] Column: How corporations keep classic works for their own profit - Los Angeles Times. New Year’s Day brought a vast bounty of artistic and culturally important works into the public domain for the first time. 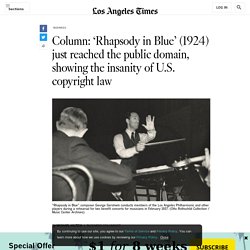 Among the classic works that can now be reproduced, reprinted, performed or shown by anyone without interference from heirs of their creators or the payment of license fees are George Gershwin’s “Rhapsody in Blue” and “Fascinating Rhythm,” E.M. Forster’s novel “A Passage to India,” A.A. Milne’s poetry collection “When We Were Very Young” (including the first appearance of Winnie-the-Pooh) and Buster Keaton’s film “Sherlock Jr.” Copyleft. Practice of mandating free use in all derivatives of a work Copyleft is the practice of granting the right to freely distribute and modify intellectual property with the requirement that the same rights be preserved in derivative works created from that property.[1] Copyleft in the form of licenses can be used to maintain copyright conditions for works ranging from computer software, to documents, art, scientific discoveries and even certain patents.[2] Copyleft software licenses are considered protective or reciprocal in contrast with permissive free software licenses,[3] and require that information necessary for reproducing and modifying the work must be made available to recipients of the software program, or binaries. 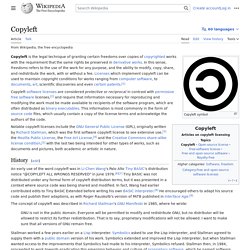 Copyright Criminals (2009) Congress Is Making Headway on a Bill to Modernize How Musicians Are Paid. Doug Collins, a conservative Republican from rural Georgia in the U.S. 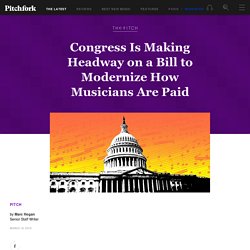 House of Representatives, likes pretty much the type of music you’d expect from someone in his rank and station. His desert island albums are by Meat Loaf and the Eagles. He’s amped about having caught a couple of AC/DC live shows: “Any band that puts cannons onstage, that’s worth seeing.” He also happens to be a leading architect of what would be the biggest change to music royalties in the last 20 years. Major Organizations Announce Support for Music Modernization Act. More than 20 prominent music organizations representing U.S. music publishers, record labels, songwriters, composers, artists and performance rights organizations today formally announced their united support for pending music bills, paving the way for a unified piece of music legislation for 2018. 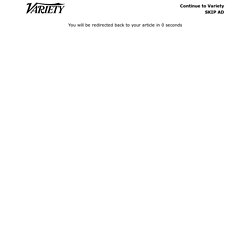 Major film studio. Warner Bros. Walt Disney Studios Universal Pictures Columbia Pictures Paramount Pictures 20th Century Fox A major film studio is a production and distribution company that releases a substantial number of films annually and consistently commands a significant share of box office revenue in a given market. Most of today's Big Six control subsidiaries with their own distribution networks that concentrate on arthouse pictures (e.g. BREIN. The stichting BREIN (Bescherming Rechten Entertainment Industrie Nederland) translates roughly as association for the Protection of the Rights of the Entertainment Industry of the Netherlands. BREIN (English: Brain or Brains) is an association in which the Dutch recording industry and movie studios participate. Participants[edit] Several organizations or rights holders in the Entertainment Industry are participants in the organization.

It became Public Law number 94-553 on October 19, 1976 and went into effect on January 1, 1978. History and purpose[edit] Copyright Act of 1976. The Mythology of the Public Domain: Exploring the Myths Behind At. Eldred v. Ashcroft. Eldred v. Berne Convention. Opposition to copyright. The symbol of Kopimi, an anti-copyright initiative developed by the Piratbyrå, a Swedish organisation actively opposing modern copyright law and practices, and the previous operators of BitTorrent trackerThe Pirate Bay, before it was spun off as an independent organisation.