Why is reading so hard nowadays?

Tolstoy’s Reading List: Essential Books for Each Stage of Life. By Maria Popova Even if one could never “finish” great literature, one has to begin somewhere. 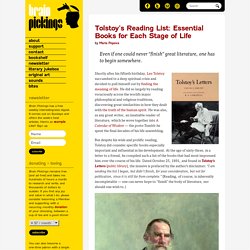 Shortly after his fiftieth birthday, Leo Tolstoy succumbed to a deep spiritual crisis and decided to pull himself out by finding the meaning of life. He did so largely by reading voraciously across the world’s major philosophical and religious traditions, discovering great similarities in how they dealt with the truth of the human spirit. He was also, as any great writer, an insatiable reader of literature, which he wove together into A Calendar of Wisdom — the proto-Tumblr he spent the final decades of his life assembling. But despite his wide and prolific reading, Tolstoy did consider specific books especially important and influential in his development. That only two known women figure in Tolstoy’s list is, one would imagine, less a function of his bias than of his era’s and his culture’s — though the latter certainly shape the former.

“Great”: “V. great”: “Enormous”: Can a Book Ever Change a Reader’s Life for the Worse? Each week in Bookends, two writers take on questions about the world of books. 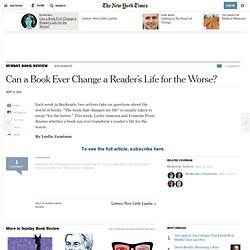 “The book that changed my life” is usually taken to mean “for the better.” This week, Leslie Jamison and Francine Prose discuss whether a book can ever transform a reader’s life for the worse. By Leslie Jamison Novels can become embodiments of our own worst impulses, can christen or distill or liberate these impulses. Photo At his sentencing hearing in 1981, after he was convicted of John Lennon’s murder, Mark David Chapman read aloud from J. “The Catcher in the Rye” was the book Chapman had been reading at the crime scene when he was arrested.

A few years later, the serial killers Leonard Lake and Charles Ng embarked on what they called “Operation Miranda,” a violent spree of torture, rape and murder named for the woman abducted by a deranged butterfly collector in John Fowles’s novel “The Collector,” which they cited as their inspiration. “I picked up this book at a thrift store for 10 cents. Being a Better Online Reader. Soon after Maryanne Wolf published “Proust and the Squid,” a history of the science and the development of the reading brain from antiquity to the twenty-first century, she began to receive letters from readers. 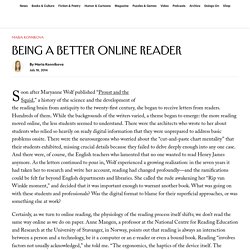 Hundreds of them. While the backgrounds of the writers varied, a theme began to emerge: the more reading moved online, the less students seemed to understand. There were the architects who wrote to her about students who relied so heavily on ready digital information that they were unprepared to address basic problems onsite. Being a Better Online Reader. Reading insecurity: The crippling fear that the digital age has left you unable to read deeply and thoughtfully. Everett Collection Slate is an online magazine, which means you are almost certainly reading this on a screen. 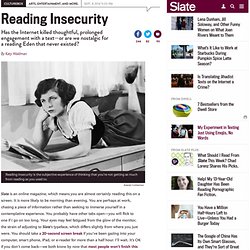 It is more likely to be morning than evening. You are perhaps at work, chasing a piece of information rather than seeking to immerse yourself in a contemplative experience. You probably have other tabs open—you will flick to one if I go on too long. Your eyes may feel fatigued from the glow of the monitor, the strain of adjusting to Slate’s typeface, which differs slightly from where you just were. Reading: The Struggle by Tim Parks. The conditions in which we read today are not those of fifty or even thirty years ago, and the big question is how contemporary fiction will adapt to these changes, because in the end adapt it will. 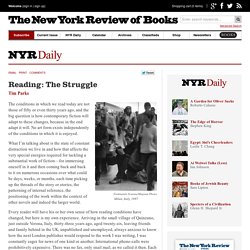 No art form exists independently of the conditions in which it is enjoyed. What I’m talking about is the state of constant distraction we live in and how that affects the very special energies required for tackling a substantial work of fiction—for immersing oneself in it and then coming back and back to it on numerous occasions over what could be days, weeks, or months, each time picking up the threads of the story or stories, the patterning of internal reference, the positioning of the work within the context of other novels and indeed the larger world.

My Dirty Little Secret: I Ride the Rails to Read. Like most academics, I read articles and books. 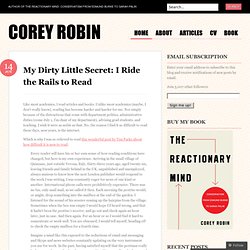 Unlike most academics (maybe, I don’t really know), reading has become harder and harder for me. Not simply because of the distractions that come with department politics, administrative duties (come July 1, I’m chair of my department), advising grad students, and teaching. I wish it were as noble as that. No, the reason I find it so difficult to read these days, now years, is the internet. Which is why I was so relieved to read this wonderful post by Tim Parks about how difficult it is now to read. Every reader will have his or her own sense of how reading conditions have changed, but here is my own experience.

Imagine a mind like this exposed to the seductions of email and messaging and Skype and news websites constantly updating on the very instrument you use for work. Now, on the contrary, every moment of serious reading has to be fought for, planned for. My Dirty Little Secret: I Ride the Rails to Read.