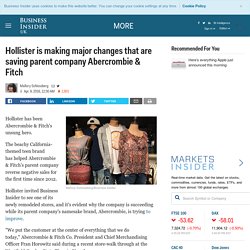 The beachy California-themed teen brand has helped Abercrombie & Fitch's parent company reverse negative sales for the first time since 2012. Hollister invited Business Insider to see one of its newly remodeled stores, and it's evident why the company is succeeding while its parent company's namesake brand, Abercrombie, is trying to improve. "We put the customer at the center of everything that we do today," Abercrombie & Fitch Co. President and Chief Merchandising Officer Fran Horowitz said during a recent store-walk through at the Westfield Garden State Plaza in New Jersey. That's more important than ever, especially considering the ever-increasing demands of Gen Z — the generation to which Hollister aims to cater. First: the company retired its storefront porches for a more modern look: video screens. Horowitz conceded that before the remodeling, the stores were "difficult to shop. 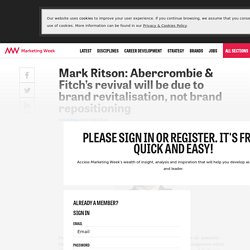 The once all-powerful fashion retailer declined as a result of ageing customers, bizarre management edicts and over exposure. The company has endured 11 consecutive quarters of declining sales and, in perhaps the most painful blow yet, recently recorded the lowest ever score on the annual ACSI assessment of retailer popularity. And yet there is a growing sense of optimism swirling around ‘The Campus’ – the company’s HQ set in the woods of central Ohio. The long lines outside Abercrombie that once symbolised its success might not be gone forever. A new management team is working wonders and there is a growing recognition that they might be able to pull this off and, thanks to extremely prudent strategic thinking, make the brand popular again.

The team’s first big insight was not to reposition Abercrombie but to revitalise it. In Abercrombie’s case, its story did not begin with darkened stores and shirtless teens. Q&A: Superdry group marketing director Simon Lloyd - Marketing Week. Marketing Week: What’s the current marketing strategy for Superdry? 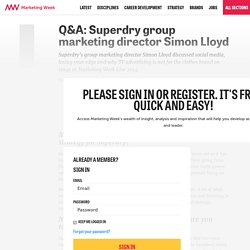 We famously made a big shift when David Beckham wore our T-shirt. A lot of what we do is looking at what influencers there are amongst our consumers and listening to the customer day in and day out. MW: You are Superdry’s first CMO. SL: [The role] is a double-edged sword. It’s great to have that success but how do we stay really relevant and cool to the core consumer who made us famous? MW: What is the approach to multichannel retailing at Superdry? SL: A lot has been done by entrepreneurial decision-making. MW: Where do you see growth coming from? Abercrombie & Fitch's Rebrand Continues With First Campaign From New Creative Director. We've been optimistically following Abercrombie & Fitch's comeback story since spring 2015, when the company laid out plans for a major rebranding that involved revamping the product and store merchandising for an older customer and getting rid of dark lighting, heavy scents, shirtless models and the brands infamous sexualized marketing. 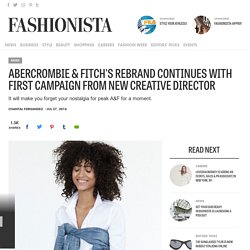 It proceeded to make some some unexpected hires for key positions in the past year, including a menswear designer from Club Monaco and a womenswear designer from Karl Lagerfeld, that bode well for implementing a fresh change. Finally in the last fiscal quarter of 2015, Abercrombie saw revenue growth for the first time since 2012. It didn't hold in the first quarter of 2016, however, when comparable sales decreased by 4 percent overall and 8 percent at Abercrombie & Fitch, the brand. Hollister faired better, where sales were flat. Hollister Co. New Hollister Ads Feature Real Life Teens.