Magellan was first to sail around the world, right? Think again. Five hundred years ago, Ferdinand Magellan began a historic journey to circumnavigate the globe. 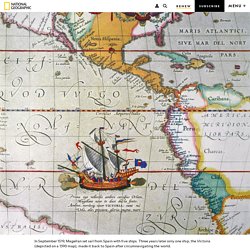 Simple, right? Not really— the explorer and his voyage are a study in contradiction. Magellan was Portuguese, but sailed on behalf of Spain. He was a formidable captain, but his crew hated him. His expedition was the first to sail around the world, but he didn’t end up circling the globe himself. Nonetheless, it’s clear that Ferdinand Magellan’s 1519 expedition changed the world forever. Brutal, bellicose, and brave, Magellan turned a commercial voyage into a hair-raising showdown with a wide world few Europeans could imagine. The Portuguese nobleman was born Fernão de Magalhães around 1480.

At the time, Portugal and Spain were involved in an intense rivalry to see who could find and claim new territory where they could source the spices coveted by European aristocrats. After winter weather forced his ships to wait for months in what is now Argentina, Magellan’s crew mutinied. Bullnyacadmed00253 0102. Document 4 e28093 encomienda system comparing perspectives. Smallpox and the Conquest of Mexico - Past Medical History. Cuauhtemoc Surrenders. From Fray Bernardino de Sahagún, Florentine Codex, Book 12, Chapter 40 Here it is told how the men of Tlatilulco and Tenochtitlan surrendered to the Spaniards and what happened when they were among them. 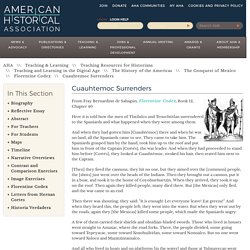 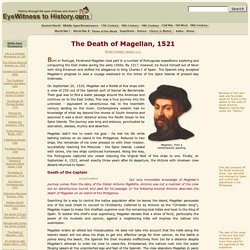 By 1517, however, he found himself out of favor with King Emanuel and shifted his allegiance to King Charles I of Spain. The Spanish king accepted Magellan's proposal to lead a voyage westward to the riches of the Spice Islands of present-day Indonesia. Capture of an Inca King: Francisco Pizarro From Narrative of the Conquest of Peru, by his secretary, Francisco de Xeres, 1530-34 [Pizarro sends for Atahualpa.] Spain's American Colonies and the Encomienda System. Lecture 2: The Age of Discovery. Introduction -- The mid-to-late 15th century has quite rightly been called the AGE OF EXPLORATION and Discovery. 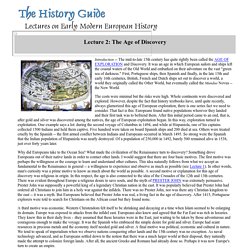 It was an age in which European sailors and ships left the coastal waters of the Old World and embarked on their adventure on the vast "green sea of darkness. " First, Portuguese ships, then Spanish and finally, in the late 15th and early 16th centuries, British, French and Dutch ships set out to discover a world, a world they originally called the Other World, but eventually called the Mundus Novus -- the New World. The costs were minimal but the risks were high. Whole continents were discovered and explored. However, despite the fact that history textbooks have, until quite recently, always glamorized this age of European exploration, there is one series fact we need to consider.

Why did Europeans take to the Ocean Sea? A third motive was economic. There were, of course, many obstacles to success in ocean navigation. Other Spanish discoveries followed those of Columbus. National Geographic - America Before Columbus. Christopher Columbus, Journal (1492) Hernán Cortés: Brutal conquest of the Aztec Empire. 10 Aztec Sacrifice Facts – Human Sacrifices. The Aztecs were a powerful and dominant society that lived in central Mexico from the 12th to the 14th century. 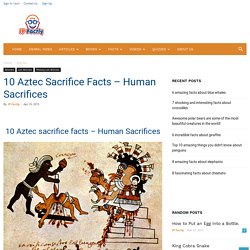 They built a civilization with highly educated and skilled people, complex infrastructure and architecture and a sophisticated political system. However, what most people today know the Aztecs for is the practice of human sacrifice. In this article, we will explore 10 bloodthirsty facts about the ritual that was steeped in religion and mythology. Add a comment to this Aztec sacrifice video here. 1. Human sacrifice was performed by many South American cultures at this time, including the Mayans. 2. How Magellan circumnavigated the globe - Ewandro Magalhaes. Interested in learning more about Ferdinand Magellan? 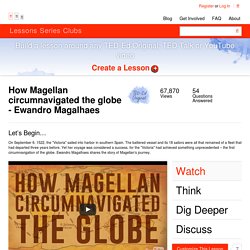 This link is a great starting place! This History site about Portuguese explorer Magellan is also full of great information. Princeton University also has a wonderful resource about Magellan and his voyages. Take a look! The history of chocolate - Deanna Pucciarelli. Cocoa grows only 20° north and south of the equator. 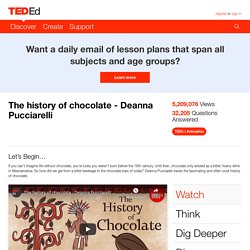 Click here to see the major growing regions. There are many chocolate timelines, here is a brief sequencing of innovations and discoveries listed on a commercial chocolate of the month club. Etymologists trace the origin of the word "chocolate" to the Aztec word "xocoatl," which referred to a bitter drink brewed from cacao beans. The late Sophie Coe and her husband Michael Coe posit in their book the True History of Chocolate that the earliest linguistic evidence of chocolate consumption stretches back three thousand years, to pre-Columbian cultures of Mesoamerica such as the Olmec.

Why would a very bitter substance, cacao beans, encased in a shell be chosen as the consumable while the white, sweet pulp surrounding the cocoa beans not be eaten as a fruit nectar, or fermented into an alcoholic beverage? Today farmers and scientists understand how crucial the pulp’s role is to fermenting cacao beans.