Relative Pronouns with comics and jokes: who, which, that, when and where. We use relative clauses to provide more information about a person, a thing or a place. 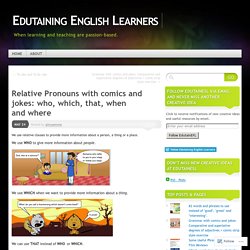 We use WHO to give more information about people. We use WHICH when we want to provide more information about a thing. We can use THAT instead of WHO or WHICH. We use WHERE for places. And WHEN for time. NB! Also notice that we put the relative pronouns immediaty after the noun about which we are giving more information. All Things Topics - Home. American Council on the Teaching of Foreign Languages. Cambridge English Write & Improve. American English at State - Photos. Skip Reske's ESL BITS - English Language Learning - ESL Listening Stories, Songs, Audiobooks. 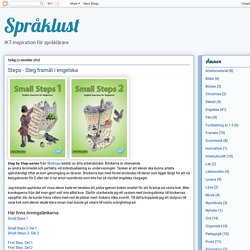 Every minute of Michelle Obama’s 30 minute speech today is worth watching. Mark Furr's magic discussion circles.docx. Activate Games for Learning American English: Board Games. Engelsk grammatik. Super Synonyms Sheet. Our Super Synonyms Sheet features lots of the most common nouns, adjectives, verbs and adverbs, along with synonyms for each. 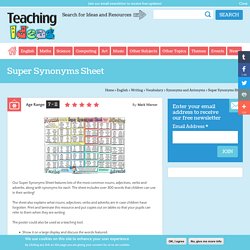 The sheet includes over 300 words that children can use in their writing! The sheet also explains what nouns, adjectives, verbs and adverbs are in case children have forgotten. Print and laminate this resource and put copies out on tables so that your pupils can refer to them when they are writing. 25 Online Games for English Language Learners. GameZone: Dozens of simple, straightforward games about grammar, spelling, and vocabulary reach out to English language learners at all levels. 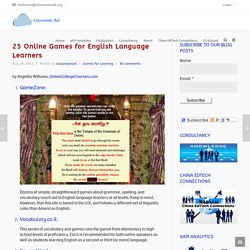 Keep in mind, however, that this site is based in the U.K. and follows a different set of linguistic rules than American English.Vocabulary.co.il:This series of vocabulary and games runs the gamut from elementary to high school levels of proficiency. Each is recommended for both native speakers as well as students learning English as a second or third (or more) language.Power Words:PBS’ WordGirl and her simian sidekick Captain Huggy Face do battle against Fair City’s most sinister citizens, but it’s up to players to determine the course of the action. Picking the wrong words means letting the villains follow through with their sneaky plots.LearnEnglish Kids:The British Council presents a suite of super cool games covering different elements of the English language. Most Important Verbs + Prepositions Structures.

Learn English through Movies: A Complete Guide - English Conversations. Nowadays we have a variety of sources for movies and series, such as Youtube, DVDs, cable and satellite TV, just to name a few. 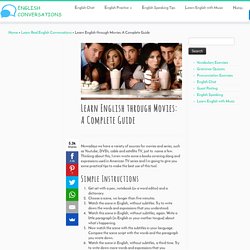 Thinking about this, I even wrote some e-books covering slang and expressions used in American TV series and I’m going to give you some practical tips to make the best use of this tool. Fluent LandCommon Words + Prepositions. 20 Writing Mistakes Even Native Speakers Make. The Olympic Games. 45 Essential British Slang Words for English Learners - Fluent LandFluent Land. For people outside of the UK even the word ‘slang’, might be unusual, so to clarify, ‘slang’ refers to the casual use of words that have been newly created and are usually spoken only by select groups of people. 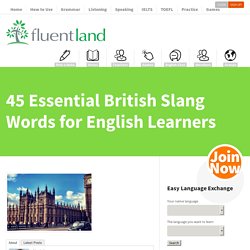 Slang in Britain flourishes, from North to South or East to West you’ll find an interesting mix of English and regional dialects, sometimes heavily influenced by international culture (heighted by internet culture). You can easily find yourself puzzled by the quick retorts of youth, or the savvy lingo expressed by the professional and even by the old pensioners outdated observations. Thankfully, we’ve devised a guide to popular slang, the following table reveals the meaning behind the words: Persuasive Writing: The Debate Championship - BlairTurner.com. Murder mystery lesson - food & drink by - US Teacher Lessons. 10 commonly made mistakes in vocabulary instruction. Please note: this post was written in collaboration with Steve Smith of and Dylan Vinales of Garden International School. 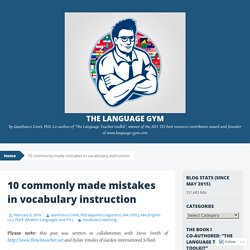 Grammar auction. Printables. Homepage. OSSLT%20StED Writing%20A%20News%20Report. Untitled. 12 Fun Speaking Games for Language Learners. Posted 11/12/2015 2:28PM | Last Commented 12/18/2015 6:31PM Have you ever asked a question to your English language class, only to be answered with complete silence and blank stares? 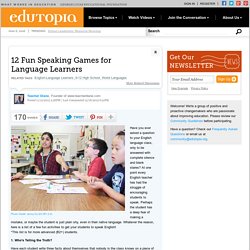 At one point every English teacher has had the struggle of encouraging students to speak. Perhaps the student has a deep fear of making a mistake, or maybe the student is just plain shy, even in their native language. Whatever the reason, here is a list of a few fun activities to get your students to speak English! *This list is for more advanced (B2+) students. 1. Have each student write three facts about themselves that nobody in the class knows on a piece of paper. 2. "Putting the Life Back in Upper Elementary Classrooms: One Lesson at a Time.": More Enrichment Ideas! MONDAY MORNING DIFFERENTIATION IDEAS! 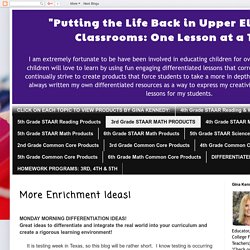 Great ideas to differentiate and integrate the real world into your curriculum and create a rigorous learning environment! It is testing week in Texas, so this blog will be rather short. I know testing is occurring throughout the country as most Common Core states are testing over the next few weeks as well and I'd like to wish everyone a healthy and happy productive few weeks. Class story. An activity that involves collaboration with the whole class to write a story that uses the target language. 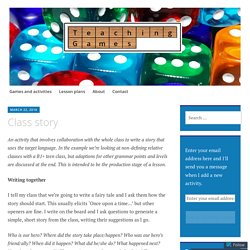 In the example we’re looking at non-defining relative clauses with a B1+ teen class, but adaptions for other grammar points and levels are discussed at the end. This is intended to be the production stage of a lesson. Writing together I tell my class that we’re going to write a fairy tale and I ask them how the story should start. This usually elicits ‘Once upon a time…’ but other openers are fine.

Part of this reluctance to speak seems to stem from having no knowledge or strong opinions about the topics being discussed, or not having enough time to think about an answer before a more confident student dominates the conversation. This activity was designed for quiet and shy students by helping them start from expressing a single opinion to engaging fully in a debate. This activity includes two sets of worksheets for Intermediate and Upper-intermediate classes which can be downloaded here as a powerpoint file or as a PDF. The following plan is based on an intermediate level class of 10 to 12 students. 5 of My Favorite English Games for ESL Students.

I saved the best for last. My students requested this game more often than any other game we ever played. It's based on the old drinking game "Ring of Fire," modified for the classroom. Materials needed:A standard deck of playing cards, a whiteboard, 20-30 small slips of blank paper, and a bowl. Teach them English. The Spelling Challenge: are you up to it? Is it definetely or definitely? Which is correct, possession or possesion? Most students struggle with English spelling and no wonder, English spelling is difficult. Plain and simple. The best advice I can probably give you to improve your spelling is to read a lot and then if you keep misspelling a word, you might want to write it down several times ( I’m sorry! I know it sounds like a very traditional thing to do, but it works and this is what is really important, isn’t it?).

English Grammar lessons. Build Digital Lego Comic Books with Key Stage 1. Seven steps to vocabulary learning. You might expect that, after having been exposed to a word in ten, twenty, or maybe at the very most thirty, contexts, a learner will gradually piece together the word's meaning and start to use it correctly, appropriately and fluently. Classroom context Seven steps to vocabulary learning Conclusion Classroom context Of course we cannot expect a learner to acquire difficult words in the same way as a young child acquires their first language, but, perhaps as teacher we can somehow help learners to arouse their 'learning monitor' by, for example, providing rich contexts containing the target language and by giving our learners time to reflect on what the language item means.

In this way teachers can use the EFL classroom to replicate the real world and nurture strategies to help students understand and produce difficult language items which often seem beyond their grasp. Wonderful Free Templates to Create Newspapers for your Class. Spelling Lessons. Most of the lessons include a video & exercise — click on the links below.You can download the videos and put them on your computer, mobile device from vimeo.com - click here. Sweden's bizarre tradition of watching Donald Duck (Kalle Anka) cartoons on Christmas Eve. A podcast about life as a teenager in Sweden. Language Games – Macmillan Dictionary.

Printable: "I Have a Dream" Mobile.