(33) Cool guide of words you can use instead of very. : coolguides. The Victorians had the same concerns about technology as we do. We live, we are so often told, in an information age. 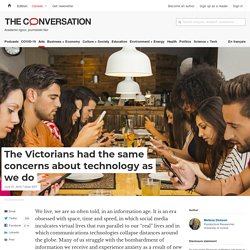 It is an era obsessed with space, time and speed, in which social media inculcates virtual lives that run parallel to our “real” lives and in which communications technologies collapse distances around the globe. Many of us struggle with the bombardment of information we receive and experience anxiety as a result of new media, which we feel threaten our relationships and “usual” modes of human interaction. Though the technologies may change, these fears actually have a very long history: more than a century ago our forebears had the same concerns.

Literary, medical and cultural responses in the Victorian age to the perceived problems of stress and overwork anticipate many of the preoccupations of our own era to an extent that is perhaps surprising. This parallel is well illustrated by the following 1906 cartoon from Punch, a satirical British weekly magazine: Programme. Iuiuh.