Rainforest Animals. 11 Amazing Rainforest Animals. From slithering anacondas to fluttering blue morpho butterflies, rainforests teem with life—in fact, these precious ecosystems are home to 80 percent of the world's terrestrial biodiversity. The Rainforest Alliance works hard to protect rainforests and the biodiversity within them through the sustainable management of tropical forests, restoring degraded land surrounding forests, and protecting rivers and streams. Here are 11 amazing rainforest species we are helping to protect with our innovative approach to conservation: 1. Mountain Gorilla. Rainforest Animals List With Pictures, Facts & Links to Further Information. Rainforests cover between 6 and 7% of the world’s land surface, yet are home to more than half of all the world’s animal and plant species. 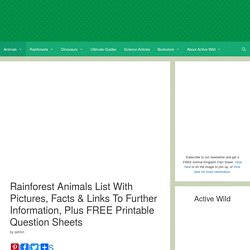 In addition, it is thought that there are millions of species living in rainforests that are still to be discovered. Well-known rainforest animals include jaguars, tigers, howler monkeys, sloths, orangutans, spider monkeys, red-eyed tree frogs, poison dart frogs and green anacondas. (Click on the names for more information.) This page contains facts, pictures and links to further information on a wide range of rainforest animals from all around the world. Scroll down to see all of the animals in alphabetical order, or select the species you’d like to see using the Rainforest Animals List Index, below. Page Index. San Diego Zoo Animals & Plants. Tropical rain forests form a lush, green band around the equator between the two latitudinal lines of the tropics of Cancer and Capricorn. 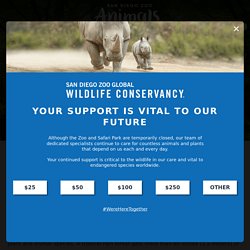 While covering less than 6 percent of Earth's surface, rain forests are home to more than 50 percent of the world's plant and animal species. A tropical rain forest gets more than 60 inches (1.5 meters) of rain per year, although some regularly get more than 200 inches (5 meters)! For comparison, San Diego gets around 9 inches (23 centimeters) per year. TROPICAL RAINFOREST ANIMAL FACTS. Rainforests animals for primary children. Rainforest Birds: Beautiful, Exotic Birds From The Rainforest! 10 Astonishing Birds of Belize. Almost 600 bird species have been identified in Belize, 20% of them winter migrants from North America. 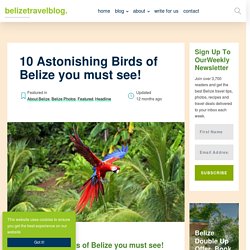 Even if you are not an 'avid birder', you’ll be amazed by the colorful species that you will encounter on any nature trip. The tropical forests, savannahs, numerous cayes, wetlands, and coastal plains of Belize offer a myriad of habitat to many birds. Nearly half of our nation’s land and adjacent waters are protected under forest reserves, marine reserves, wildlife sanctuaries, national parks and other protected area designation. 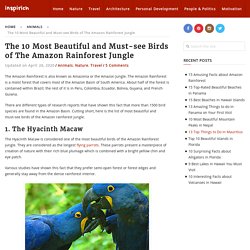 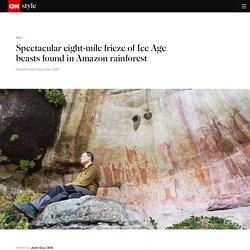 The paintings were probably made around 11,800 to 12,600 years ago, according to a press release from researchers at Britain's University of Exeter. The paintings are set over three different rock shelters, with the largest, known as Cerro Azul, home to 12 panels and thousands of individual pictographs. Located in the Serranía La Lindosa in modern-day Colombia, the rock art shows how the earliest human inhabitants of the area would have coexisted with Ice Age megafauna, with pictures showing what appear to be giant sloths, mastodons, camelids, horses and three-toed ungulates with trunks. "These really are incredible images, produced by the earliest people to live in western Amazonia," said Mark Robinson, an archaeologist at the University of Exeter. Tropical Rainforest — kidcyber. The layers are: Emergent layer Top layer is the emergent layer, the tops of huge trees as big as 100m that rise high above the rest of the forest, therefore receiving the most sunlight. 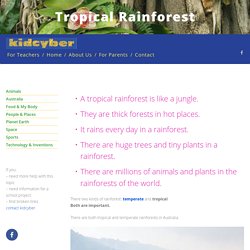 Canopy The second layer the canopy, tall trees growing close together so that their tops are close, forming a fairly continuous cover. Understorey. Rainforest Habitat. There are rainforests in Africa, Asia, Australia, and Central and South America. 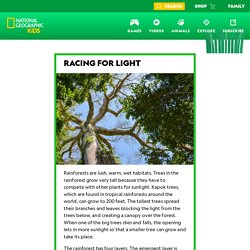 The biggest rainforest is the Amazon rainforest. It’s about the size of the contiguous United States, which doesn’t include Alaska or Hawaii. More than half of it is in Brazil, but parts are in several other South American countries, including Ecuador and Bolivia. Rainforest Information for Kids. 10 Rainforest Facts for 2020. Tropical rainforests are among the world's most important ecosystems for they role they play in sustaining life on the planet. 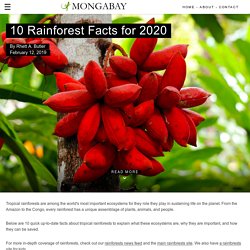 From the Amazon to the Congo, every rainforest has a unique assemblage of plants, animals, and people. Below are 10 quick up-to-date facts about tropical rainforests to explain what these ecosystems are, why they are important, and how they can be saved. Facts and information on the Amazon Rainforest. The Disappearing Rainforests We are losing Earth's greatest biological treasures just as we are beginning to appreciate their true value. 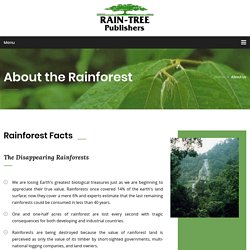 Rainforests once covered 14% of the earth's land surface; now they cover a mere 6% and experts estimate that the last remaining rainforests could be consumed in less than 40 years.One and one-half acres of rainforest are lost every second with tragic consequences for both developing and industrial countries. Rainforests are being destroyed because the value of rainforest land is perceived as only the value of its timber by short-sighted governments, multi-national logging companies, and land owners. Nearly half of the world's species of plants, animals and microorganisms will be destroyed or severely threatened over the next quarter century due to rainforest deforestation.Experts estimates that we are losing 137 plant, animal and insect species every single day due to rainforest deforestation.

That equates to 50,000 species a year. What are tropical rainforests? By Rhett A. 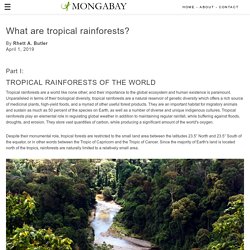 ButlerApril 1, 2019 Part I: Tropical rainforests are a world like none other; and their importance to the global ecosystem and human existence is paramount. Carbon Footprint Calculator. Forest facts for schools. Belize Zoo - The Belize Zoo. Home - Tirimbina Lodge and Rainforest Center. Student travel agency. We are a nonprofit organization founded by educators in 1989 with the mission of saving tropical forests. We began by encouraging schools to raise money to purchase rainforest acres and forwarding their donations to the Monteverde Conservation League (Costa Rica), Programme For Belize and Fundacion Jatun Sacha (Ecuador). In 1990 we began an innovative travel program that sent students and educators to the rainforests we were helping to save. Many of the students have been inspired to pursue careers in conservation, research and education as a result of these trips. The trips have also benefited environmental organizations in Latin America, helping them to generate the revenue needed to safeguard forests.

For a complete history of our organization you can click on the owl butterfly at bottom-right and download a book about us. Bruce Calhoun. Butch Beedle, Treasurer. is a retired middle school social studies teacher who has been active with Save The Rainforest since 1988. Corinne Dedini. At Home in Paradise: A Profile of Costa Rica Expert Evelyn Gallardo - Crooked Trails. Evelyn Gallardo’s life reads like an inspiring travelogue. She first discovered the world as a self-described “backpacking hippie” and went on to pursue her lifelong passion for primates by working with Dr.

Dian Fossey’s Mountain Gorilla Karisoke Research Center in Rwanda and the Orangutan Project with Dr. Birute Galdikas in Borneo in the 1980s. This work led to the creation of Evelyn’s first book, Among the Orangutans. But all travelers need a home base, and for Evelyn and her husband, as soon as they arrived at Manuel Antonio, Costa Rica they knew this was it. We recently caught up with Evelyn at home in Costa Rica after returning from an adventure in Peru and asked her a few questions about her fascinating life.

Crooked Trails: Costa Rica is well-known by travelers as the ultimate ecological destination. Evelyn Gallardo: 1. 2. Children's Eternal Rainforest, Costa Rica's largest private reserve. AMAZON WATCH » Protecting the rainforest and our climate by supporting indigenous peoples. Rainforest Alliance. Rainforest Action Network - Fighting for People and Planet. Tropical rainforests. What is a tropical forest? Tropical forests are closed canopy forests growing within 28 degrees north or south of the equator. They are very wet places, receiving more than 200 cm rainfall per year, either seasonally or throughout the year.

WWF - Endangered Species Conservation. National Wildlife Federation. Conservation International. 8 Billion Trees Official Site. Home. Rain Forest Rescue. The Nature Conservancy. Adopt an Acre. Adopt-A-Rainforest. The Adopt-A-Rainforest program allows individuals, school groups and other organizations to raise funds for programs that stop rainforest destruction. Donations to the Adopt-A-Rainforest program support the Rainforest Alliance’s mission to help communities that depend on forests for their livelihood practice sustainable management of tropical forest lands. Many people make donations to Adopt-A-Rainforest on behalf of loved ones, to celebrate weddings, birthdays and holidays, or in memoriam. Adopt an animal at the Living Rainforest. Animal Adoptions make fantastic gifts for all your friends and family.

Adopt a Sloth ❤️ The Sloth Conservation Foundation. Help us to safeguard a future for these amazing animals by adopting a sloth for yourself, a friend or family member today! We are proud to guarantee that 100% of all proceeds from our adopt a sloth program go towards funding our in-field sloth conservation programs (rather than covering big overhead costs). You can choose between a virtual or physical adopt a sloth package. Adopt A Jaguar. Your World Animal Foundation Adopt An Animal Kit comes in a Deluxe WAF Folder and includes: Glossy Photo Of Your Adopted Animal; Adopt An Animal Adoption Certificate; Fact Sheet About Your Adopted Animal; Help Animals Info Cards Packed With Information On Animal Issues & How You Can Help Animals And The Environment.