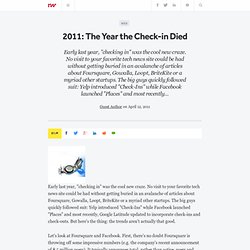 No visit to your favorite tech news site could be had without getting buried in an avalanche of articles about Foursquare, Gowalla, Loopt, BriteKite or a myriad other startups. The big guys quickly followed suit: Yelp introduced "Check-Ins" while Facebook launched "Places" and most recently, Google Latitude updated to incorporate check-ins and check-outs. But here's the thing: the trends aren't actually that good. Let's look at Foursquare and Facebook. First, there's no doubt Foursquare is throwing off some impressive numbers (e.g. the company's recent announcement of 8.5 million users). Guest author Mark Watkins is the CEO and co-founder of Goby, an inspiration engine for finding fun things to do. In July 2010, Foursquare had 2 million users performing 1 million check-ins per day. The trend for Facebook Places is even worse. The Top 10 Social Tools for Starting Revolutions. There's been some debate recently about the importance of social media tools in recent political events, such as the current unrest in Egypt or last year's Iranian election. 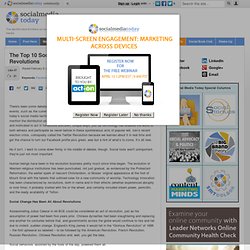 Viewed through the lens of today’s social media technologies, the unrest in Egypt is all about Twitter and Facebook (not to mention the distribution platforms of Internet search, blogs, et al). People have been touched, inspired, and motivated to act in heretofore unknown, unique ways, just as technology has enabled the world to both witness and participate as never before in these spontaneous acts of popular will. Iran’s recent election crisis, colloquially called the Twitter Revolution because we learned about it in real time and got the chance to turn our Facebook profile pics green, was but a hint of what’s to come. It’s all new. No it isn’t. Social Media Week NY (JWT) Gympen met idealen - Trouw. 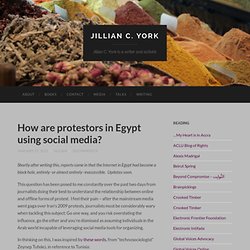 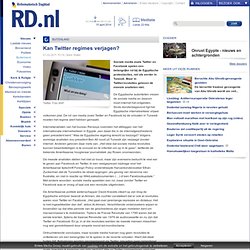 HOW TO: Build a Social Media Education Program for Your Company. The Social Media Marketing Series is supported by Webtrends Facebook Analytics, which provides comprehensive tracking and measurement solutions to help you maximize your ROI. 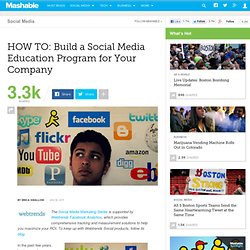 To keep up with Webtrends Social products, follow its blog. In the past few years, businesses have increasingly dedicated resources to creating social media strategies in hopes of boosting site traffic, sales and brand engagement. Joining social networks like Facebook, Twitter and YouTube, companies have struggled to create unique user experiences and provide value for followers, while also meeting management expectations and program goals. Apps from and for Africa. Open data en ontwikkelingssamenwerking. Slimmerkundetips. Crowdinvesting. Finally, the first crowdfunding platforms for investment in start ups are launching!

With ProFounder and MicroVentures in the US, CrowdCube in the UK and CrowdAboutNow in the Netherlands, investing in start up companies goes crowdfunding! Let’s take a last look at the old world we are leaving behind: Crowdinvesting has two faces: it is about supporting an entrepreneur (the social aspect) and about earning money (the financial aspect). Crowdinvesting platforms have their own focus on both the social and financial aspect. Bill Clark, MicroVentures I interviewed Bill Clark, CEO of MicroVentures, to get more insight into his vision on crowdinvesting, or micro investing, as he calls it. 1. 2. 3. 4. Secret Embassy Cables - Fulltext Search. People Power. Salji Dalje! Online charity platform. Blog Blog Blog!! 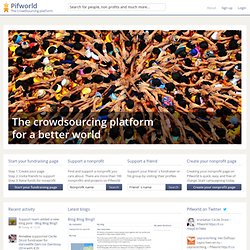 There's a big fat chance that one of our support team members have sent you an email or a PM on the site urging you to post a blog. Now I'm going to continue this quest and post a blog regarding blogging - because we really believe that blogging is the key for success and community building on this platform! This is also why this month is blogging awareness month at PIFworld! Looking around, there are a lot of nonprofits and fundraisers on this platform that all have an idea what they are fighting for. But a lot of new members on our platform are still looking for a nonprofit to donate to, or a project that they... read more Hollen voor HealthNet, leuk of eigenlijk niet?

Het klinkt leuk, hollen voor HealthNet, en als je sportief genoeg bent is dat het misschien ook wel. Tunisian protests fueled by social media networks. Students riot in Tunisia over jobs Social networking sites have become a major factor in protests in TunisiaThe government has made blocking and disrupting bloggers a top priorityThe protests have been driven by the high rate of youth unemployment (CNN) -- The protests that have gripped Tunisia in recent weeks are, to say the least, unusual. 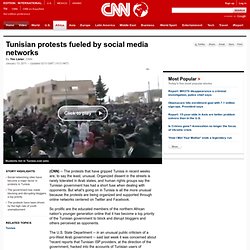 Organized dissent in the streets is rarely tolerated in Arab states, and human rights groups say the Tunisian government has had a short fuse when dealing with opponents. But what's going on in Tunisia is all the more unusual because the protests are being organized and supported through online networks centered on Twitter and Facebook. So prolific are the educated members of the northern African nation's younger generation online that it has become a top priority of the Tunisian government to block and disrupt bloggers and others perceived as opponents. The U.S. For Washington, the situation is awkward. Recent diplomatic cables from the U.S.