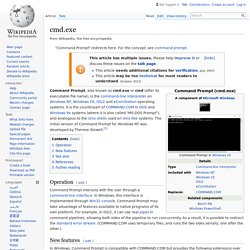 It is the counterpart of COMMAND.COM in DOS and Windows 9x systems (where it is also called "MS-DOS Prompt"), and analogous to the Unix shells used on Unix-like systems. The initial version of Command Prompt for Windows NT was developed by Therese Stowell.[1] Operation[edit] New features[edit] In Windows, Command Prompt is compatible with COMMAND.COM but provides the following extensions over it: Provides more detailed error messages than the blanket "Bad command or file name" (in the case of malformed commands) of COMMAND.COM. Internal commands have also been improved: Command Prompt: frequently asked questions (microsoft.com) List of DOS commands (wikipedia) This article presents a list of commands used by DOS operating systems, especially as used on x86-based IBM PC compatibles (PCs). 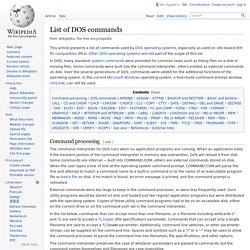 Other DOS operating systems are not part of the scope of this list. In DOS, many standard system commands were provided for common tasks such as listing files on a disk or moving files. Some commands were built into the command interpreter, others existed as external commands on disk. Over the several generations of DOS, commands were added for the additional functions of the operating system. In the current Microsoft Windows operating system, a text-mode command prompt window, cmd.exe, can still be used.

Command processing[edit] The command interpreter for DOS runs when no application programs are running. In the list below, commands that can accept more than one filename, or a filename including wildcards (* and ?) Many commands are the same across many DOS systems, but some differ in command syntax or name. Microsoft Windows XP - Cmd (microsoft.com) Prompt cmd. Batch scripting. Comparison of command shells. A command shell is a command line interface computer program to an operating system. 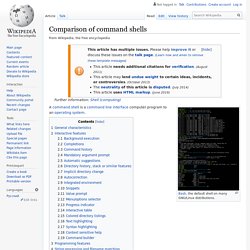 General characteristics[edit] Interactive features[edit] Background execution[edit] Background execution allows a shell to run a command in background. POSIX shells and other Unix shells allow background execution by using the & character and the end of command, and in PowerShell you can use Start-Process or Start-Job commands. Completions[edit] Completion features assist the user in typing commands at the command line, by looking for and suggesting matching words for incomplete ones. Command name completion is the completion of the name of a command. Path completion is the completion of the path to a file, relative or absolute. Wildcard completion is a generalization of path completion, where an expression matches any number of files, using any supported syntax for file matching.

Variable completion is the completion of the name of a variable name (environment variable or shell variable). Power Shell. Shell Tools (Windows) Take Command Console. Take Command Console (TCC), formerly known as 4DOS for Windows NT (4NT), is a command line interpreter by JP Software, designed as a substitute for the default command interpreter in Microsoft Windows, CMD.EXE.[2][discuss][3] History[edit] TCC is based on the earlier 4DOS command shell for DOS, and 4OS/2 for OS/2.[4] The NDOS interpreter and batch file extensions included with several Norton Utilities implementations prior to 2000 is a lightly modified and extended 4DOS interpreter. 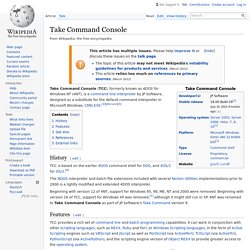 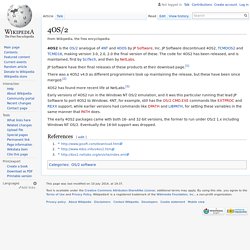 JP Software discontinued 4OS2, TCMDOS2 and TCMD16, making version 3.0, 2.0, 2.0 the final version of these. The code for 4OS2 has been released, and is maintained, first by SciTech, and then by NetLabs. JP Software have their final releases of these products at their download page.[1] There was a 4OS2 v4.0 as different programmers took up maintaining the release, but these have been since merged.[2] 4OS2 has found more recent life at NetLabs.[3] The early 4OS2 packages came with both 16- and 32-bit versions, the former to run under OS/2 1.x including Windows NT OS/2.