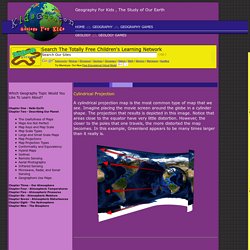 Imagine placing the movie screen around the globe in a cylinder shape. The projection that results is depicted in this image. Notice that areas close to the equator have very little distortion. 9.2 Changing Australian Communities. Lesson 4: Coastal Processes - Transportation - Year 10 Geography- Coastal Management. Coastal landforms are produced by processes. 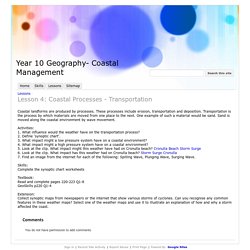 These processes include erosion, transportation and deposition. Transportation is the process by which materials are moved from one place to the next. One example of such a material would be sand. Sand is moved along the coastal environment by wave movement. Activities: Geographical Processes - COASTAL MANAGEMENT ON THE GOLD COAST, AUSTRALIA. Cliffandwavecuts. Student and teacher resources. OzCoasts Landform & Stability Maps: Introduction. Background | What the Smartline is | Why and how the Smartline Coastal Geomorphic Map of Australia was created | How the Smartline map is structured and classified | What Information can be accessed via the Smartline map window on this website | Sample Query-building exercise for Smartline Geomorphic search (Advance) | Data Quality and Completeness Background. 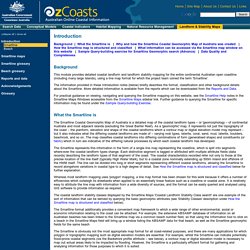 Coastal Processes. The extent to which the shape of a beach or coast is altered depends largely on the action of waves upon it. 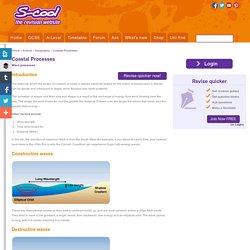 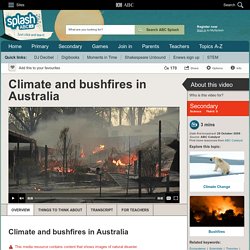 What can science tell us about the major cause of bushfires in Australia's past? How can it help us predict future bushfires? Two scientists discuss evidence related to bushfire regimes (bushfire patterns, types and intensity). Please note that this clip contains recent images of homes destroyed by fire that may disturb some people. Duration: 3 mins Source : ABC Catalyst Learning area: Science Secondary: Year 9. Quest for the South Pole. By Kelly Tyler Posted 03.26.02 NOVA Early explorers skimmed the boundaries of Antarctica in daring sea voyages to the ends of the Earth. 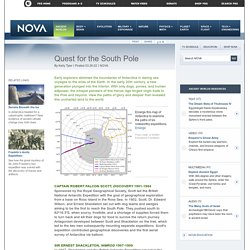 In the early 20th century, a new generation plunged into the interior. Mawson's Huts Foundation. Robert Falcon Scott - the journey to the pole. The Journey to the Pole A party set out first with supplies with the motor sledges while the others with ponies and dogs followed behind. 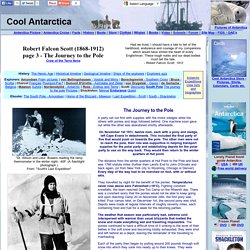 One machine soon gave out while the other was abandoned shortly afterwards. On November 1st 1911, twelve men, each with a pony and sledge, left Cape Evans in detachments. Sentinel. Perfect storm led to Black Saturday bushfires. THE BLACK SATURDAY bushfires, which swept across Victoria in February 2009, were the most devastating in Australia's recorded history. 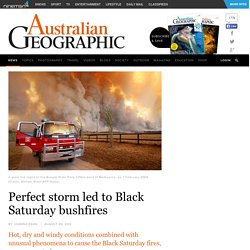 They caused 173 fatalities, destroyed more than 2100 homes and decimated a number of townships, including Marysville and Kinglake. Knowledge of weather at the time demonstrated that particularly high daytime temperatures, strong surface winds and extremely dry conditions combined to produce the worst fire conditions on record. Now, a new study, published in the Quarterly Journal of the Royal Meteorological Society, reveals that weather variations on more localised scales also exacerbated the Black Saturday fires. Dramatic fire changes The research, led by Dr Todd Lane and Chermelle Engel from the University of Melbourne, shows that knowledge of broad-scale weather conditions alone - such as temperature, humidity, wind speed and wind direction - cannot explain the dramatic fire changes that occurred over very short distances on Black Saturday.

What Causes Bushfires? Fire caused by lightning The basic factors which determine whether a bushfire will occur include the presence of fuel, oxygen and an ignition source. 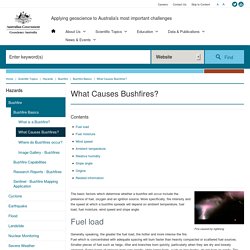 More specifically, fire intensity and the speed at which a bushfire spreads will depend on ambient temperature, fuel load, fuel moisture, wind speed and slope angle. Fuel load. Exploring bushfires. Welcome to the Bushfire Open Explorer. 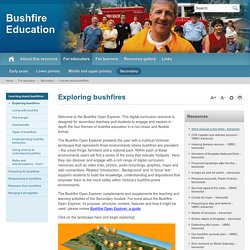 This digital curriculum resource is designed for secondary teachers and students to engage and explore in depth the four themes of bushfire education in a non-linear and flexible format. The Bushfire Open Explorer presents the user with a mythical Victorian landscape that represents three environments where bushfires are prevalent – the urban fringe, farmland and a national park. Within each of these environments users will find a series of fire icons that indicate ‘hotspots’. Here they can discover and engage with a rich range of digital curriculum resources such as video links, photos, audio recordings, graphics, maps and web connections. Related 'Introduction’, ‘Background’ and ‘In focus’ text supports students to build the knowledge, understanding and dispositions that empower them to live more safely within Victoria’s bushfire-prone environments. Www.bushfireeducation.vic.edu.au/DLOs/OpenExplorer/index.html.

Besides the sites listed below, there are many more excellent sites offering information and other materials on a variety of Antarctic-related themes. These are referred to in each unit of Classroom Antarctica when they are of use for particular activities. Other Antarctic programs and organisations Related organisations, on the AAD website Antarctic education and information sites About Antarctica is a great introductory guide designed for high school students and covering topics such as continental drift, weather, ice movements, global warming, seals, and penguins. Live from Anarctica 2: Teacher Web Pages. Large And Small Scale Maps. Large Scale Map Versus Small Scale Map A map which depicts a small territory is referred to as a large scale map.

This is because the area of land being represented by the map has been scaled down less, or in other words, the scale is larger. A large scale map only shows a small area, but it shows it in great detail. A map depicting a large area, such as an entire country, is considered a small scale map. Geography iPad Apps. Antarctica. LEARNING ABOUT THE RAINFOREST. Rainforest Biomes. The tropical rain forest is a forest of tall trees in a region of year-round warmth. An average of 50 to 260 inches (125 to 660 cm.) of rain falls yearly.

Rain forests belong to the tropical wet climate group. The temperature in a rain forest rarely gets higher than 93 °F (34 °C) or drops below 68 °F (20 °C); average humidity is between 77 and 88%; rainfall is often more than 100 inches a year. There is usually a brief season of less rain. In monsoonal areas, there is a real dry season. Rainforests now cover less than 6% of Earth's land surface. A tropical rain forest has more kinds of trees than any other area in the world.

▶ Man vs wild -Vietnam's Jungle from thegreatwall88. LEARNING ABOUT THE RAINFOREST. Aboriginal population in Australia. Aboriginal population figures. What about Indigenous Australians? Earth Science - Animations and Visual Learning Aids. Discovering Antarctica - What, where, why? The Beaufort Scale. Grade 7 Geography Cross Section of Wolfe Creek Crater by michelle ciarloni on Prezi.

Interactive Map of Southeast Asia and Australia. Teachers Homepage - National Geographic Education. This website would like to remind you: Your browser (Firefox 17) is out of date. Update your browser for more security, comfort and the best experience on this site. Educators! For Geography Teachers.