The Bartlett School of Planning - UCL - London's Global University. Graduate Program in Sociocultural Anthropology, Anthropology. Cultural anthropologists in the department share a belief that study and research must be firmly grounded in rigorous training in general social and cultural theory, both in contemporary writings and in the classics of anthropology and sociology. 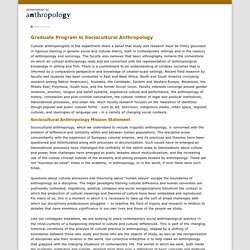 The faculty also believes that basic ethnography remains the cornerstone on which all cultural anthropology rests and are concerned with the representation of anthropological knowledge in writing and film. There is a commitment to an understanding of complex societies that is informed by a comparative perspective and knowledge of smaller-scale settings. Recent field research by faculty and students has been conducted in East and West Africa, North and South America (including research among Native Americans), Australia, the Caribbean, Eastern and Western Europe, Melanesia, the Middle East, Polynesia, South Asia, and the former Soviet Union. 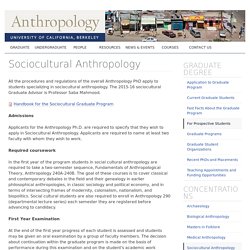 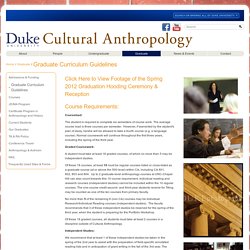 Department of Anthropology. Director of Museum Anthropology:Brian Boyd - 961A Schermerhorn Extension; 212-854-1390; bb2305@columbia.edu "Museum Anthropology" refers to the critical study of museums from an anthropological perspective, including their history and changing role in society. 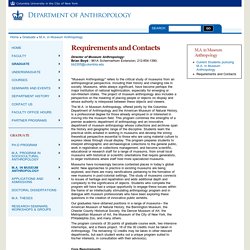 Museums, while always significant, have become perhaps the major institution of national legitimization, especially for emerging or non-Western states. The project of museum anthropology also includes a perspective on the meaning of placing people or objects on display and whose authority is interposed between these objects and viewers. The M.A. in Museum Anthropology, offered jointly by the Columbia Department of Anthropology and the American Museum of Natural History, is a professional degree for those already employed in or interested in moving into the museum field. Department of Anthropology. Program Requirements The program consists of 30 points of graduate course work and a thesis project. 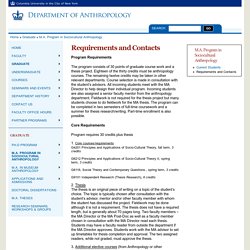 Eighteen of the thirty credits must be anthropology courses. The remaining twelve credits may be taken in other relevant departments. Course selection is made in consultation with the student’s advisors. All incoming students meet with the MA Director to help design their individual program. Core Requirements Program requires 30 credits plus thesis 1. MA in Anthropology & Cultural Politics, Goldsmiths, University of London. What is the relationship between culture and power? 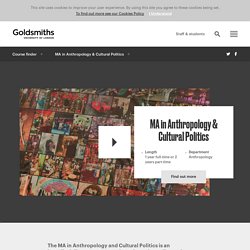 How is power manifested or articulated 'culturally'? In what ways may culture be understood to be 'political'? Social and Cultural Anthropology MSc at University College London on FindAMasters.com. This MSc provides a thorough grounding in anthropological theory and analysis, an understanding of ethnographic approaches to the study of social worlds, and a strong foundation in research practices. 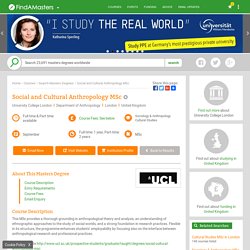 Flexible in its structure, the programme enhances students’ employability by focusing also on the interface between anthropological research and professional practices. See the website Key Information - Application dates All applicants: Open: 5 October 2015 Close: 1 June 2016 English Language Requirements. Social and Cultural Anthropology. MA Socio-Cultural Anthropology (L6K107) - Course Information. Course Content Description This course is designed for students with an undergraduate degree in a subject other than anthropology who would like to prepare for research in socio-cultural anthropology or for a career requiring expertise in anthropology. 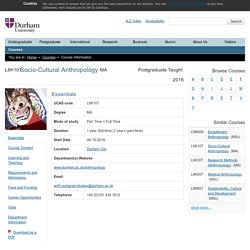 High profile social anthropologist researchers at Durham, with experience of conducting fieldwork all around the world, introduce students to both classical and contemporary writing and research in the discipline. There is equal emphasis on theoretical and methodological questions, and plenty of opportunity to apply this new knowledge to issues of pressing social concern. The full-time course consists of two terms of teaching, during which students are introduced to the range of research questions and methods, and a dissertation, involving the design, development and implementation of an independent research project. Social and Cultural Anthropology. Social and Cultural Anthropology MSc. MA History and Classics. History is a perfect partner for Classics, the study of the languages and literatures of the ancient Greeks - the 'inventors' of the western historical tradition - and the Romans. 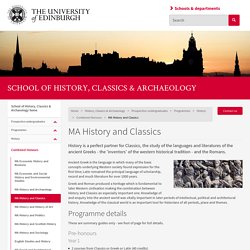 Ancient Greek is the language in which many of the basic concepts underlying Western society found expression for the first time; Latin remained the principal language of scholarship, record and much literature for over 1000 years. Greek and Roman produced a heritage which is fundamental to later Western civilisation making the combination between History and Classics an especially important one. Knowledge of and enquiry into the ancient world was vitally important in later periods of intellectual, political and architectural history.

Knowledge of the classical world is an important tool for historians of all periods, place and themes. Programme details These are summary guides only - see foot of page for full details. Pre-honours Year 1 Year 2 Honours Year 3 Year 4. Classical Reception (MA by Research) You will study one compulsory course unit (40 credits) and complete a dissertation (140 credits). 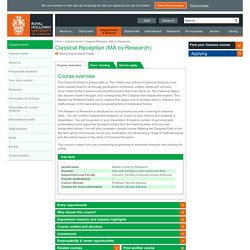 Core course units: Making the Classical Past (40 credits) You will be introduced to a range of theoretical approaches to Classical Reception organised in three inter-related themes: The Reception of Myth; Empire and City and Philosophy, Poetics and Form. You will explore issues relating to gender, post-colonialism, radical politics, political theory, urban design and theory, aesthetics, critical theory, and time. You will have the opportunity to deploy a range of material from fine art, cinema, poetry, philosophical tracts and political writings. Dissertation (140 credits) You will be guided in selecting a topic in the first term and that topic will be refined during that term. Classical Receptions. MA in Classical Reception. MA in Reception Studies. Our MA in the Reception of the Classical World makes extensive use of the unique features of UCL: its central location, diverse international expertise, interdisciplinary outlook, and close relationship with its sister classics departments in Royal Holloway and Kings College.

We provide research tours of nearby research resources, such as the British Museum, the Warburg and Courtauld Institutes, Sir John Soane’s Museum, and the British Film Institute. Our programme is taught by highly experienced staff from within and outside our department. MA English Literature and Classics. Classics MRes - University of Leeds. The MRes begins with a core module, Using the Past, taught in weekly lectures and seminars. This will give you a foundation in Graeco-Roman culture, the ways in which classical writers used their own past and how the classics have been received over time.

From there you’ll shape your own studies, selecting the classical eras, authors, and disciplines you want to focus on, and conduct supervised research in these areas to prepare for your dissertation. You’ll benefit from research training in the School of Languages, Cultures and Societies, including a practical introduction to key research tools and resources in classics.