Dabur Vs Marico: The Battle Is Getting Bigger In One Corner Of India’s Consumer Market. Real Estate News: Forget Dying, Shopping Malls Are Thriving In India. Here’s Why. Diageo pays $5m fine over ‘misleading’ sales. 20th February, 2020 by Melita Kiely The Securities and Exchange Commission (SEC) has fined Diageo US$5 million after its North American arm created a “misleading picture” of its financial results. 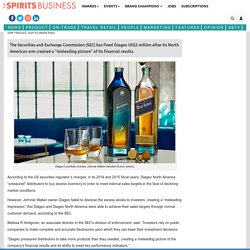 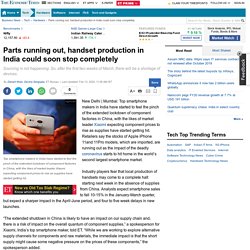 Retailers say the stocks of Apple iPhone 11and 11Pro models, which are imported, are running out as the impact of the deadly coronavirus starts to hit home in the world’s second largest smartphone market. Industry players fear that local production of handsets may come to a complete halt starting next week in the absence of supplies from China. Analysts expect smartphone sales to fall 10-15% in the January-March quarter, but expect a sharper impact in the April-June period, and four to five week delays in new launches. “The extended shutdown in China is likely to have an impact on our supply chain and, there is a risk of impact on the overall quantum of component supplies,” a spokesperson for Xiaomi, India’s top smartphone maker, told ET.

Toshniwal Equity sur Twitter : "India Cinema (PVR & Inox) - PVR has been slightly ahead of Inox in terms of operational metrics - PVR gains from (1) greater presence in North/South (2) focus on Hollywood - PVR loses from (1) lower promoter holding (20% on. This is an interesting way that Bajaj Finance used to grow cons durable loans - later copied by banks which got rapped on the knuckles by RBI. Thread.…

There is a common thread to all successful FMCG companies in India and it is called UniPepCad. Toshniwal Equity sur Twitter : "Quick Bite vs Cloud Kitchen Category - Dominoes by far the clear leader in Quick Bite Category - Ovenstory now in 14 of top 16 cities where Dominos is present - However, only 6 other brands have scaled up presence to over 3. Smartphone shipment growth likely to be lowest in 2020. Himanshi Lohchab and Danish Khan New Delhi: Growth in India’s smartphone sales next year may ease to its slowest pace as people hold on to their devices for longer due to the lack of innovation in new models and higher average prices, industry executives and analysts said.There’s also been a huge pile-up of inventory left with sellers after a surge in shipments for the festive season, which may take up to six quarters to clear, they added. 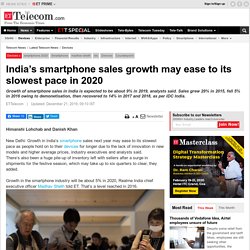 Growth in the smartphone industry will be about 5% in 2020, Realme India chief executive officer Madhav Sheth told ET. That’s a level reached in 2016. “The lifecycle of the replacement has increased by three months to 14-15 months, which will delay purchases. This means at least 20% of the possible sales will be postponed to 2021,” he said. Cooking oil gets costlier due to expensive imports from Malaysia and Indonesia. Retail Loans To Double To Rs 96 Lakh-Crore In Five Years, Says Crisil. GSK to sell 6% stake in HUL for $3.7bn: Report. GlaxoSmithKline (GSK) is planning to sell its stake in Hindustan Unilever (HUL) in ‘tranches’ by early 2020, reported The Economic Times. 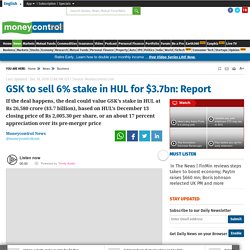 The move follows GlaxoSmithKline Consumer Healthcare’s decision on December 3, 2018 to merge with the Indian unit of Unilever. As per the report, GSK said it would sell its stake, close to six percent, in HUL once the merger was completed in early 2020. The approval for the merger between HUL and GSK Consumer is expected by December-end from the National Company Law Tribunal (NCLT) bench in Chandigarh, it added. If the deal fructifies, the deal could value GSK’s stake in HUL at Rs 26,580 crore ($3.7 billion), based on HUL’s December 13 closing price of Rs 2,005.30 per share, or about 17 percent appreciation over its pre-merger price. Moneycontrol could not independently verify the report. Indian QSR Market - Dominos (Jubilant Foodworks) dominates the market (outlet + revenue) - Mcdonald & KFC having greater revenue/store & running neck to neck - Subway the "laggard. 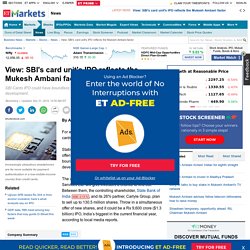 A comparable penetration figure for the US is 320. ITC Launches World’s Most Expensive Chocolate At Rs 4.3 Lakh/Kg. IPL News: Indian Premier League’s Brand Valued At $6.8 Billion In 2019. Stock to buy: Watch this stock for early signs of economic revival. By Ishika Mookerjee For equity investors seeking early signs of any revival among India’s consumers, here is a stock to watch: the distributor of Domino’s Pizza and Dunkin’ Donuts in the country. 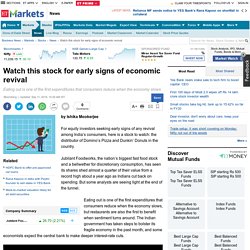 Jubilant Foodworks, the nation’s biggest fast food stock and a bellwether for discretionary consumption, has seen its shares shed almost a quarter of their value from a record high about a year ago as Indians cut back on spending. But some analysts are seeing light at the end of the tunnel. Eating out is one of the first expenditures that consumers reduce when the economy slows, but restaurants are also the first to benefit when sentiment turns around.

The Indian government has taken steps to bolster its fragile economy in the past month, and some economists expect the central bank to make deeper interest-rate cuts. The company began venturing into Chinese food with its first own brand, Hong’s Kitchen, six months ago, which may arrest a trend of slowing same-store sales since 2018, analysts say. India Moves Up Six Places On Tourism Competitiveness Index: WEF Report. FMCG Sales: Distributors Face Inventory Pile Up As Consumer Goods Sales Fail To Recover. The Times Of India. Mitsubishi UFJ Financial Acquires 9.93% Stake In Tata Global Beverages. Vi-John, Maker Of India’s Most-Selling Shaving Cream, Has A Beard Problem. P&G's Gillette writes off $8 billion as men stop shaving. Procter & Gamble, the world’s largest consumer goods company, beat earnings expectations this week, causing its stock to soar to a record high. 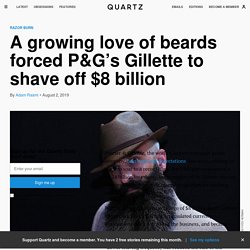 But P&G also announced a $5.24 billion loss due to the struggles of its Gillette shaving business, in part because many hirsute men are ditching razors. P&G reported an after-tax charge of $8 billion on its Gillette Shave Care line, reflecting accumulated currency devaluations since it acquired the business, and because many men have stopped shaving. “Lower shaving frequency has reduced the size of the developed blades and razor’s market,” said Jon Moeller, P&G’s chief financial officer, in the post-earnings call with analysts, also blaming new, lower-priced competitors like Unilever’s Dollar Shave Club and Harry’s. Sales across all of P&G’s categories (pdf) grew during the latest quarter, some by double digit percentages. Still, the grooming category lagged behind the rest, with just 4% growth.

India’s consumer durables industry will reach $36 billion by 2023 and $23 billion or 63% of total sales will be digitally influenced.… ITC jumps on healthy snacks bandwagon. KOLKATA: ITCNSE -1.72 % Ltd is entering the healthy snacks segment by launching a range of baked chips chips made of healthy products under its Bingo brand in a bid to take the first-mover advantage among the larger brands and expand its share in packaged snacks against main competitor, PepsiCo. 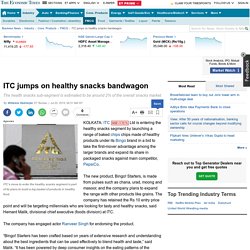 The new product, Bingo! Starters, is made from pulses such as chana, urad, moong and masoor, and the company plans to expand the range with other products like grains. The company has retained the Rs 10 entry price point and will be targeting millennials who are looking for tasty and healthy snacks, said Hemant Malik, divisional chief executive (foods division) at ITC. The company has engaged actor Ranveer Singh for endorsing the product.

“Bingo! FMCG industry is unhappy as FSSAI (@fssaiindia) proposes 'red' alert on products with high fat, sugar, salt content. This means around 70% of packaged foods could be marked 'red' @PriyaSheth7… Zara’s Indian Partner Is Building Its Own Cheaper Fashion Chain. CNBC-TV18 News sur Twitter : "#India's consumer electronics industry has been struggling, white goods makers as well as retailers have seen a slowdown across segments especially in the air conditioners & television category @PriyaSheth7… Premiumisation, internet drive growth of beauty industry in India: Report. New Delhi: India’s $14 billion beauty and personal care industry is on a roll thanks to online sales of beauty products, premiumisation, and an inclination towards organic and ethical brands. 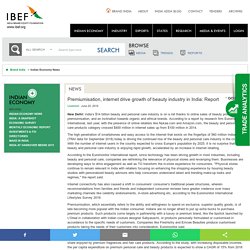 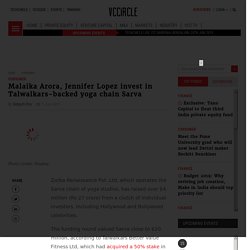 Ltd, which operates the Sarva chain of yoga studios, has raised over $4 million (Rs 27 crore) from a clutch of individual investors, including Hollywood and Bollywood celebrities. The funding round valued Sarva close to $20 million, according to Talwalkars Better Value Fitness Ltd, which had acquired a 50% stake in the yoga chain in January 2016. The Mumbai-listed gymnasium chain said in a stock-exchange disclosure that the investors in the angel funding round included Bollywood actors Shahid Kapoor and Malaika Arora, and Hollywood actor-singer Jennifer Lopez. David Giampaolo, chief executive at London-based investor club Pi Capital, and Mark Mastrov, founder of 24 Hour Fitness, also participated in this round.

Talwalkars didn't give any financial details of the angel funding round. Stressed millennials are boosting Indian restaurant business. Here's how. Why Eveready Lost 75% Of Its Market Cap In 15 Months. The market value of Eveready Industries (India) Ltd. plunged by two-thirds in 15 months as India’s largest maker of dry and flashlight batteries struggled to fend off competition from cheaper imports and its debt rose. While the company generates almost nothing in cash, its plan to sell land in Chennai to repay debt is yet to fructify. That prompted India Ratings & Research Ltd. to downgrade the company’s long-term debt. Shares of the battery maker have tumbled 40 percent this year and about 75 percent from the record level of January last year. And even as investors are jittery, Brij Mohan Khaitan, promoter and head of the Williamson Magor Group, resigned as chairman citing old age.

Ahead of etail launch, Reliance Industries pulls out brands from rivals. NEW DELHI: As a precursor to the launch of its own business-to-consumer (B2C) marketplace that will sell everything from food to fashion, Mukesh Ambani’s Reliance Industries has started withdrawing its clothes, shoes and lifestyle products from would-be rival marketplaces like Amazon and Flipkart. These include its own as well as global brands for which the group has selling rights in India. The process of withdrawals has gathered pace in recent months as RIL prepares for its major online initiatives later this year, according to three people aware of the development. RIL has the highest number of global fashion and lifestyle brands in its stable with around four dozen joint ventures or master franchisee arrangements with international labels including Diesel, Kate Spade, Steve Madden, Burberry, Canali, Emporio Armani, Furla, Jimmy Choo and Marks & Spencer. Polycab India: Polycab India shares to list on bourses on Tuesday.

Shares of Polycab India will be listed on BSE and the National Stock Exchange on Tuesday after a blockbuster IPO, which subscribed around 52 times last week. The public offer was opened for subscription during April 5-9 with a price band of Rs 533 to Rs 538. Quota reserved for qualified institutional buyers (QIB) as well as non-institutional investors got subscribed 92.44 times and 110.42 times, respectively. Overall, the initial public offer received bids for around 91.64 crore shares against 1.76 crore shares on offer.

Edited excerpts: What is your view on rural plays? There could be some budget linked announcements and there are a lot of sectors and specific stocks that could stand to benefit. What is your expectation and what is the general trend? Every time the budget comes, we talk about rural themes and some amount of trading bounce takes place in these companies.