The Ideas of Free Will and Responsibility in Buddhist Ethics - www.cattrang.org. By Khai Thien The concepts of free will and karma in Buddhism both address the same issue—individual potentiality and ethical responsibility—although neither developed in the same way. 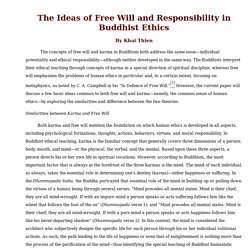 The Buddhists interpret their ethical teaching through concepts of karma in a special direction of spiritual discipline, whereas free will emphasizes the problems of human ethics in particular and, to a certain extent, focusing on metaphysics, as noted by C. A. Exploring Karma & Rebirth: Amazon.it: Nagapriya: Libri in altre lingue. Evolution, Reincarnation and Karma. Evolution According to the current theories of modern science, evolution is thought to be a patient, inexorable law of nature which causes lower life-forms to gradually mutate into higher ones. 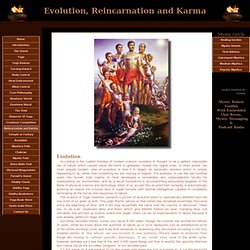 In other words, the most popular modem view of evolution is that it is largely an automatic process which is simply happening to us, rather than something we are causing to happen. For example, in just the last hundred years the human brain seems to have developed a remarkable and unprecedented faculty for manipulating our environment, and as a result humankind is accomplishing astounding progress in the fields of physical science and technology. Good Kamma! Bad Kamma! What Exactly is Kamma? Karma in Action. Bad Karma. In the Tricycle office this morning we discussed karma and rebirth at our morning meeting and how, while opinions vary widely on the subjects, the concept is freely used and often with little understanding. 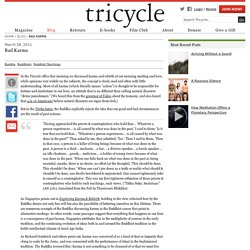 Most of all karma (which literally means "action") is thought to be responsible for fortune and misfortune in our lives, an attitude that is no different than calling natural disasters "divine punishment. " (We heard this from the governor of Tokyo about the tsunami, and also heard that 4 in 10 Americans believe natural disasters are signs from God.) But in the Tittha Sutta, the Buddha explicitly rejects the idea that our good and bad circumstances are the result of past actions: "Having approached the priests & contemplatives who hold that... Free Dharma Teachings Project for the benefit of all sentient beings. Progetto Insegnamenti sul Dharma a beneficio di tutti gli esseri senzienti. » Blog Archive » Karma e rinascita. Singapore, 10 Agosto 1988. 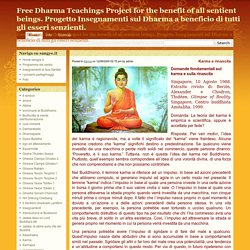 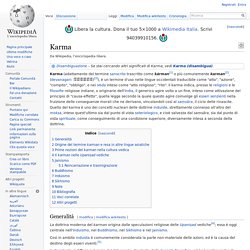 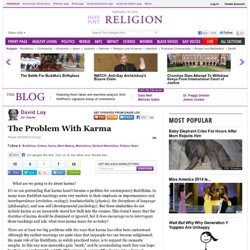 It's no use pretending that karma hasn't become a problem for contemporary Buddhism. In many ways Buddhist teachings seem very modern in their emphasis on impermanence and interdependence (evolution, ecology), insubstantiality (physics), the deceptions of language (philosophy), and non-self (developmental psychology). But these similarities do not include karma as an inexorable moral law built into the cosmos. This doesn't mean that the doctrine of karma should be dismissed or ignored, but it does encourage us to interrogate those teachings and ask: what does karma mean for us today? There are at least two big problems with the ways that karma has often been understood. Karma has also been used to rationalize sexism, racism, caste, economic oppression, birth handicaps, and almost everything else.

William James on Habit. By Maria Popova “We are spinning our own fates, good or evil, and never to be undone. 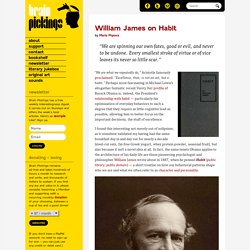 Karma & Habit - Jack Kornfield. In the ancient texts, karma is written as a compound word, karma-vipaka. 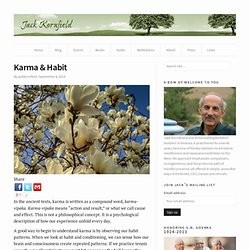 Karma-vipaka means “action and result,” or what we call cause and effect. This is not a philosophical concept. Brain Karma. It seems that everyone wants change: the latest tech gadget, a different job, a better relationship. 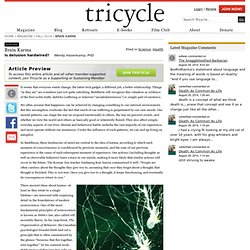 Things “as they are” are somehow just not quite satisfying. Buddhists will recognize this situation as evidence of the first noble truth: dukkha (suffering or inherent “unsatisfactoriness”) is simply part of existence. We often assume that happiness can be achieved by changing something in our external environment. But this assumption overlooks the fact that much of our suffering is perpetuated by our own minds. Our mental patterns can shape the way we respond emotionally to others, the way we perceive events, and whether we view the world and others as basically good or inherently flawed. The Problem With Karma. Ken Wilber and Integral Post Metaphysics(IPM) Ken Wilber and Integral Post Metaphysics(IPM) Dr. 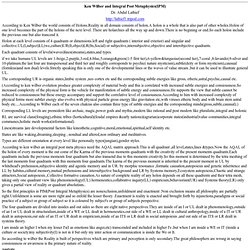 Abdul Lathief According to Ken Wilber the world consists of Holons.Reality in all domain consists of holon.A is a whole that is also part of other wholes.Holon of one level becomes the part of the holons of the next level. There are holarchies all the way up and down.There is no begining or end.So each include the previous one but also trancend it. Manifestations of Karma: Lecture 10: Free Will and Karma in the Future of Human Evolution. THERE are certain deeper questions of karmic connection concerning more especially our human influence upon karma, particularly upon that of other people, and concerning also the changing of the direction of karma, be it to a greater or less extent.

This is the Dalai Lama's first book that is wholly dedicated to modern science as whole, but the title may be a bit misleading. Pasqualotto_morte. Understanding Karma and Rebirth. A Buddhist Perspective by Diana St Ruth Buddhist Publishing Group Published: 2008 Paperback, 216 pages. A look into the effects of karma, with meditations and exercises to help us go beyond the concepts of birth and death and to live from the unborn moment.

You can buy Understanding Karma and Rebirth from the Book Depository for around £10 with free worldwide delivery. See below for other online sites. Texte zum engagierten Buddhismus.