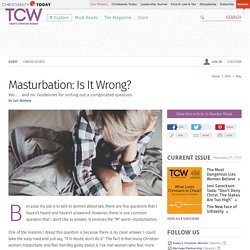 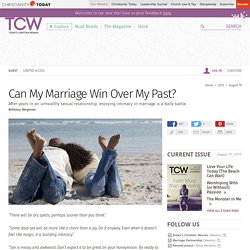 “Some days sex will be more like a chore than a joy. Do it anyway. Even when it doesn’t feel like magic, it is building intimacy.” “Sex is messy and awkward. Don’t expect it to be great on your honeymoon. Such were the well-intentioned words of advice from my closest girlfriends at my bachelorette party. What happens when your sexual baggage is larger than a carry-on? Haunted by My Past In college, I was in a three-year, on-again-off-again relationship with Mitchell (not his real name). Every time I “loved” him that way, I felt filthy and violated; he would fall asleep or walk out of the room, and I would sob silently—hoping there was more to sex than this but doubting that it could be true.

I spent many years after that relationship as a single woman, and slowly but faithfully, the Lord healed my broken pieces. When I eventually started dating my now-husband, Dan, we committed to waiting for marriage. Our Best Sex Advice. Planning It's funny—a wife will put great effort and planning into meal preparation, but we think sex should be spontaneous. 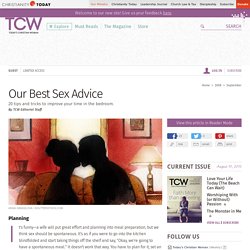 It's as if you were to go into the kitchen blindfolded and start taking things off the shelf and say, "Okay, we're going to have a spontaneous meal. " It doesn't work that way. You have to plan for it, set an attitude for it. The same is true of sex, but we don't do it. —Mary Ann Mayo Evaluate priorities We need to be careful we aren't always putting something else ahead of sex: Nightline, paying the bills, getting our child her third drink of water. —Elizabeth Cody Newenhuyse Men and aging As a man ages he will require direct penile stiumation to get an erection, rather than responding to visual stimuli or thought stimulus.

—Cliff and Joyce Penner Giving pointers Expressing positive messages during sex enhances the experience for both spouses. If there are times when you feel you must take "corrective action" during sex, state your desires positively. Nonverbal cues. A Blog by Dr. Juli Slattery. Putting Sex on the To-Do List. I'd returned from running errands one afternoon when I walked into the house and saw my husband give me "The Look. 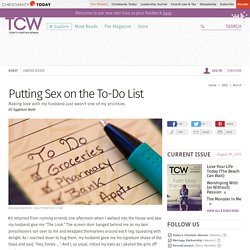 " The screen door banged behind me as my twin preschoolers ran over to me and wrapped themselves around each leg, squealing with delight. As I reached down to hug them, my husband gave me his signature shake of the head and said, "Hey, honey … " And I, as usual, rolled my eyes as I peeled the girls off my legs. If your husband's anything like mine, you know what the "dot, dot, dot" means. Those little punctuation marks come at the most inconvenient times! I mean, come on, I'd just picked up the dry cleaning, bought his cousin a wedding gift, found new shoes for our twins, shopped for his favorite food for dinner that night. But God had some lessons for me that night, and many more nights to follow. The Good News About All This Bad News.