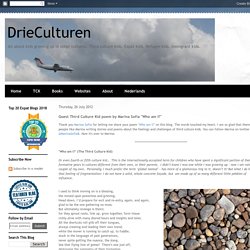 " on this blog. The words touched my heart. I am so glad that there are people like Marina writing stories and poems about the feelings and challenges of third culture kids. You can follow Marina on twitter too @MarinaSofia8. Am I rootless, or am I free? ‘Third culture kids’ like me make it up as we go along. O, but where are you really from?” 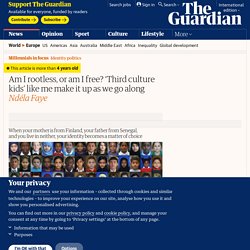 It is the question that automatically makes the hairs on the back of my neck stand up. Like many “third culture kids” (TCKs), I panic, wondering whether the question refers to my nationality, where I was born, where I am living now, or where my parents live. The term, coined by the American sociologist Ruth Hill Useem, refers to a child who has spent a significant part of their formative years outside their parents’ culture. Resources for the IB Diploma. The Nature of Writing. Introduction Before we explain any literary text, it’s good to take a step back and reflect on the act of interpretation itself. 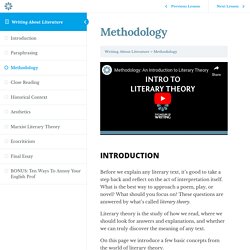 What is the best way to approach a poem, play, or novel? What should you focus on? These questions are answered by what’s called literary theory. Literary theory is the study of how we read, where we should look for answers and explanations, and whether we can truly discover the meaning of any text. On this page we introduce a few basic concepts from the world of literary theory. Author – Text – Audience. Literary or non-literary: that is the question. Whether it matters or not to determine if a text is literary or non-literary is a different question, and an interesting one to consider not only within the study of IB Diploma Programme (DP) language A subjects but also because of our permanent efforts to establish connections with theory of knowledge, one of the core components of the IB DP. 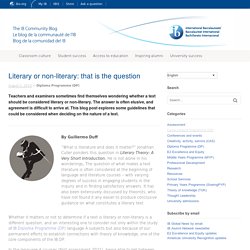 In the language A courses (first assessment 2021), being able to tell between literary and non-literary texts matters more than ever. The 2021 language A: language and literature course, for example, requires that literary and non-literary texts be explored together in the individual oral, and students need to make sure that they are choosing one of each. Digital in 2018: World’s internet users pass the 4 billion mark - We Are Social. The new 2018 Global Digital suite of reports from We Are Social and Hootsuite reveals that there are now more than 4 billion people around the world using the internet.

Well over half of the world’s population is now online, with the latest data showing that nearly a quarter of a billion new users came online for the first time in 2017. Africa has seen the fastest growth rates, with the number of internet users across the continent increasing by more than 20 percent year-on-year. Much of this year’s growth in internet users has been driven by more affordable smartphones and mobile data plans. More than 200 million people got their first mobile device in 2017, and two-thirds of the world’s 7.6 billion inhabitants now have a mobile phone. More than half of the handsets in use today are ‘smart’ devices too, so it’s increasingly easy for people to enjoy a rich internet experience wherever they are.

Why English Should Not Be The International Language Of The World – Whistling In The Wind. When I was younger I didn’t like languages. 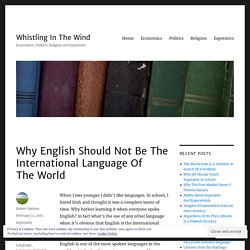 In school, I hated Irish and thought it was a complete waste of time. Why bother learning it when everyone spoke English? In fact what’s the use of any other language when it’s obvious that English is the international language? This view is very common among English native speakers and to a certain extent it’s true. Is the Global Spread of English Good or Bad? - DebateWise.

English has in the 20th century become the global language. 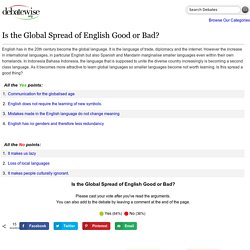 It is the language of trade, diplomacy and the internet. However the increase in international languages, in particular English but also Spanish and Mandarin marginalise smaller languages even within their own homelands. In Indonesia Bahasa Indonesia, the language that is supposed to unite the diverse country increasingly is becoming a second class language. As it becomes more attractive to learn global languages so smaller languages become not worth learning.

Across cultures, English is the word. ‘Kindly adjust’ to our English. I have long immodestly considered myself the inventor of the term 'prepone'. 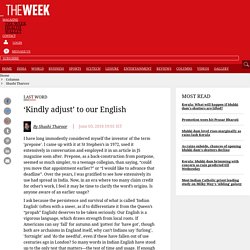 I came up with it at St Stephen’s in 1972, used it extensively in conversation and employed it in an article in JS magazine soon after. Prepone, as a back-construction from postpone, seemed so much simpler, to a teenage collegian, than saying, “could you move that appointment earlier?” ‘Kindly adjust’ to our English. Product Advertising. Product Advertising. Advertisement Production for Television: Codes and Conventions of TV Advertising. Advertisements are used today to promote and sell a product/service to the audience. 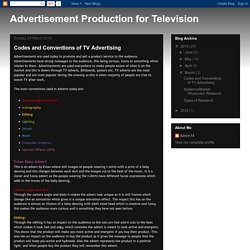 IB English A: Language & Literature: PIE structure. Mass media have permeated every space of our lives Here is an everyday situation: I log on to the computer at school to get an assignment done. 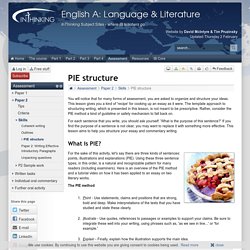 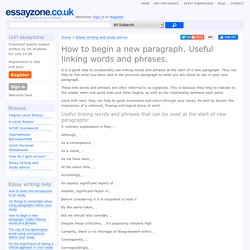 They can help to link what you have said in the previous paragraph to what you are about to say in your new paragraph. These link words and phrases are often referred to as signposts. Transition Words & Phrases. As a "part of speech" transition words are used to link words, phrases or sentences. They help the reader to progress from one idea (expressed by the author) to the next idea. Thus, they help to build up coherent relationships within the text. Transitional Words This structured list of commonly used English transition words — approximately 200, can be considered as quasi complete.

Commercials are short , usually between 15-30 seconds, so you need one point you can sell well instead of 18 points at once.