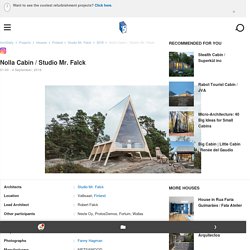 Falck Architects Location Lead Architect Robert Falck Other participants Neste Oy, ProtosDemos, Fortum, Wallas Area 9.0 m2 Project Year 2018 Photographs Manufacturers METSAWOOD Text description provided by the architects. This summer, living with minimal emissions will be put to the test. Neste is building a prototype of a cabin that has a minimal environmental impact in terms of both carbon dioxide emissions and concrete impact on nature. Located on the idyllic island of Vallisaari in the Helsinki archipelago, the Nolla cabin encourages people to consider how modern solutions and innovations could enable sustainable cabin living. Cabin Norderhov / Atelier Oslo. 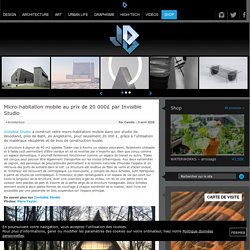 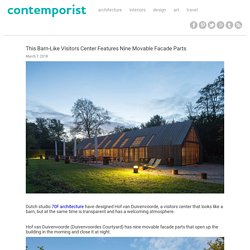 Hof van Duivenvoorde (Duivenvoordes Courtyard) has nine movable facade parts that open up the building in the morning and close it at night. When designing the building, the architect had trouble finding someone who would be able to create the movable facade parts. Bas ten Brinke, owner of 70F architecture, therefore decided to do the engineering himself, and the result is a facade that can be opened, adding light to the interior restaurant, and when closed, the building becomes a modest barn. Modular Eco-Housing Pushing Boundaries With Cardboard. Gerry Judah Creates JACOB'S LADDER For New Zealand Sculpture Park. Photography by David Hartley-Mitchell British artist and designer Gerry Judah has created a new sculpture named JACOB’S LADDER, that’s been added to the Gibbs Farm Sculpture Park in New Zealand. 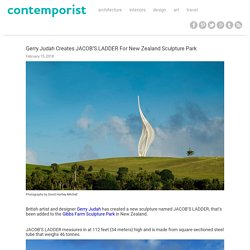 JACOB’S LADDER measures in at 112 feet (34 meters) high and is made from square-sectioned steel tube that weighs 46 tonnes. To create the design, 480 lengths of steel were stacked one on top of each other, with each layer slightly different in length and size, and then shifted and rotated relative to the layer below, producing the final curving shape. Shangping Village Regeneration / 3andwich Design / He Wei Studio. 72h Cabin / JeanArch. 5 People Will Spend 72 Hours In These Cabins To Study The Health Effects Of Living In Swedish Nature. Photography by Maja Flink As part of a new case-study that will investigate the effects on health of living in Swedish nature, “The 72 Hour Cabin” will be launching on October 10th, and five people with some of the most stressful jobs from around the world will experience a ‘close to nature’ lifestyle that involves them staying in a little cabin for three days. 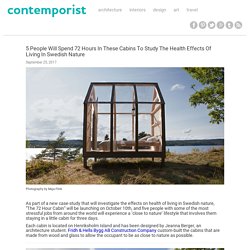 Each cabin is located on Henriksholm Island and has been designed by Jeanna Berger, an architecture student. Fridh & Hells Bygg AB Construction Company custom-built the cabins that are made from wood and glass to allow the occupant to be as close to nature as possible. The program was initiated by Visit Sweden, in collaboration with Turistrådet Västsverige (West Sweden Tourist Board), with the case-study developed by two leading researchers, Walter Osika and Cecilia Stenfors, from the Karolinska Institute in Stockholm, one of the world’s foremost medical universities. Architect builds his own studio at the end of Toronto garden. The Brooklyn trend for backyard studios has extended all the way to Toronto, where the founder of architecture firm Six Four Five A has constructed a tiny timber workspace for himself at the end of the garden. 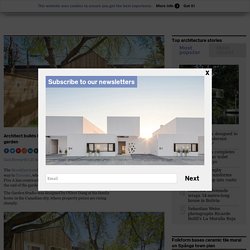 The Garden Studio was designed by Oliver Dang at his family home in the Canadian city, where property prices are rising sharply. "Having started a small business and working from home while helping raise a young child, the clients were quickly running out of space," said Six Four Five A's project statement. "But with record housing prices in Toronto, the clients could not afford to move to a larger home and did not want to move outside of the city. " Similarly to many homeowners in Brooklyn, Dang had a generous amount of space at the rear of the house, so decided to make the most of it by building a hut at the end of the yard. Fluor Architecture: Guillaume Avenard et Hervé Schneider. Fluor Architecture: Guillaume Avenard et Hervé Schneider. Knockraha / T O B Architect. Knockraha / T O B Architect Architects Location Knockraha, Co. 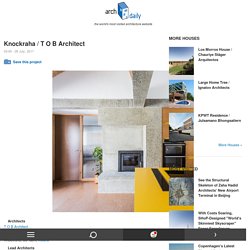 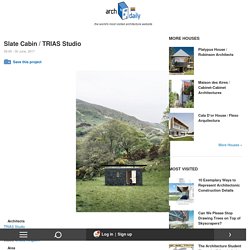 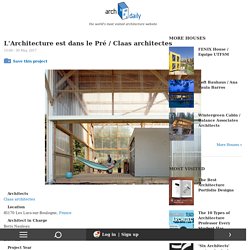 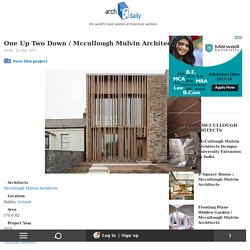 Dezeen. The architects behind a prefabricated housing company have completed one of their smallest buildings so far – a cuboidal property raised on a mirrored plinth above a grassy Portuguese landscape (+ movie). MIMA Light is the most simple of the building models offered by the MIMA House brand, established by architects Mário Sousa and Marta Brandão to offer affordable high-quality homes that are quick and easy to manufacture.

Available in a variety of sizes and colours, this house comprises a simple rectangular block. Its most unusual feature is a mirrored base, designed to create the impression that the building is floating above the ground. "MIMA Light is the ultimate achievement in modular construction, combining an outstanding lightness with an iconic and minimal image," explained the design team. "This home seems to levitate above the ground due to the lining of the base with mirrors. " It is available in lengths of between seven and 12 metres. Photography is by Jose Campos. This Custom Designed Shelf System Is Used To Store Books And Act As A Guard Rail For The Staircase.

French designer Alexandre Pain created Rossignol, a custom designed shelf and railing system that can be used to store books and act as a guard rail for the staircase. As the shelving unit is a safety railing, it connects the upper and lower levels of the home, creating a unified appearance. Each section of the beech wood strips connect to aluminum rods that make up the framework that the shelves attach to. Each shelf features four hooks that easily connect to the framework and allow the shelves to be moved and rearranged depending on the look that the home owner wants to achieve. This modern backyard pool house is designed for entertaining.

Photography by Diego Elgueta PAR Arquitectos were commissioned to design this modern pool house next to an already existing swimming pool at a home in Santiago, Chile. Inspired by pergolas, the design of the pool house includes white painted steel pillars and beams of Oregon Pine that sit on a base of stone. This amazing treehouse hotel was designed for adults on vacation.

Guy Mallinson Woodland Workshop together with Keith Brownlie from BEaM have designed The Woodman’s Treehouse, an adult version of the ever-popular kids treehouse. Located in West Dorset, England, the two-storey treehouse is arranged around a canopy of aged oak trees, and includes a circular interior with contemporary luxuries. From the outside, you can see how the treehouse stands on stilts and wraps around a single large tree. Different wooden siding covers the exterior of the treehouse, creating a unique natural look. 50 Impressive Details Using Wood. 50 Impressive Details Using Wood Over the course of history the unique characteristics of wood, which are dependent upon the species of the tree and the location in which it has grown, have enabled humanity to flourish in all parts of the globe. The architectural details of wooden construction therefore show a great diversity of meetings and joints, showing not only a project's constructive and structural logic, but also embodying the value and complexity of each project.