Educational Technology and Mobile Learning: 9 Fundamental Digital Skills Ever... 10 Tips For Smarter iPad Use In The Classroom. Unlocking The Learning Potential Of The iPad by Terry Heick The iPad. 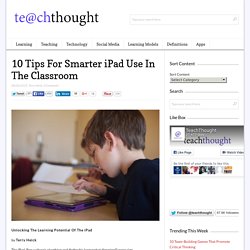 Pop culture’s plaything and #edtech’s (somewhat dimming?) Neon sign. It’s an app library, a media consumption device, and a mobile learning tool that makes yesterday’s graphing calculators, smartboards, and laptops look like abacuses. It is unclear exactly how and where we expect those miracles to show up. The local newspaper? Creating A Learning Goal. Pinterest-how-I-use-it-tolisano.png (PNG Image, 800 × 1200 pixels) - Scaled (83%)

50+ Ways to Use Technology in the Classroom. 20 Awesome BYOD and Mobile Learning Apps. We have now been Bring Your Own Device (BYOD) for three years, and boy, do the students bring it. 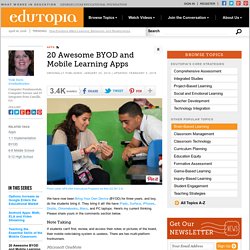 They bring it all! We have iPads, Surface, iPhones, Droids, Chromebooks, Macs, and PC laptops. Here's my current thinking. Please share yours in the comments section below. Note Taking If students can't find, review, and access their notes or pictures of the board, their mobile note-taking system is useless. Microsoft OneNote In my opinion, the most robust single note-taking app is Microsoft OneNote because it looks just like a traditional notebook. Evernote. Boyd at east hills. Meet the Tabletarians. In March 2011, the Boise Public Library (BPL), ID, used $3,300 in Library Services and Technology Act (LSTA) grant funding to purchase four iPad 2 tablets and all of the trimmings, such as wireless keyboard docks, barcode scanners, and cases with hand grips. 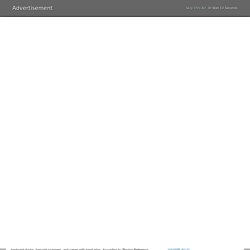 According to “Roving Reference, iPad-Style,” published in the Idaho Librarian in November 2011, “the goal of the grant was to increase staff interaction with customers by giving librarians tools to move out from behind the desk.” As with BPL, many libraries had been looking for ways to showcase librarian and staff expertise and enhance customer service. Having staff stroll the stacks and proactively offer assistance is one way to ensure that even the most reference desk–averse patrons are finding what they need, and Apple’s new tablets—the original iPad had been introduced less than a year earlier—seemed like the perfect accessory for roving reference. As it turned out, BPL may have been a couple of years ahead of its time. Digital Library Trends for 2015. Libraries in all over the world are undergoing a digital renaissance as major publishers have firmly committed themselves to the concept of making e-Books available. 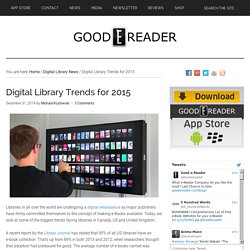 Today, we look at some of the biggest trends facing libraries in Canada, US and United Kingdom. A recent report by the Library Journal has stated that 95% of all US libraries have an e-book collection. That’s up from 89% in both 2013 and 2012, when researchers thought that adoption had plateaued for good. The average number of e-books carried was 20,244 by each library, but that of course was skewed toward large libraries. Medium sized libraries statistically had around 10,434 titles. Over 10 different libraries in the US and Canada had over one million digital loans in 2014, with two libraries lending out two million e-Books.

E-Books are doing quite well in the US, but over in the UK a sustainable model is still trying to be established by the government, libraries and major publishers. Audiobooks to be the next big thing. Top 10 Ways iPads Are Key to Teaching Kids With Learning Disabilities. By now, saying that “the iPad is a great tool for customizing the classroom” wouldn’t exactly be breaking news. 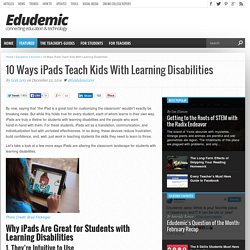 Cool Tools. Quickly Turn Physical Sticky Notes Into Digital Notes. i4s-ipad-first-5-v2.jpg (JPEG Image, 1520 × 1074 pixels) - Scaled (67%) Writing Tools. Wikispaces was founded in 2005 and has since been used by educators, companies and individuals across the globe. 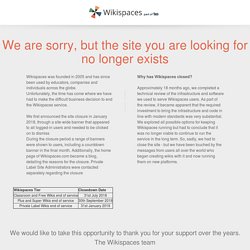 Unfortunately, the time has come where we have had to make the difficult business decision to end the Wikispaces service. We first announced the site closure in January 2018, through a site-wide banner that appeared to all logged-in users and needed to be clicked on to dismiss During the closure period a range of banners were shown to users, including a countdown banner in the final month. Additionally, the home page of Wikispaces.com became a blog, detailing the reasons for the closure. Private Label Site Administrators were contacted separately regarding the closure Why has Wikispaces closed? Approximately 18 months ago, we completed a technical review of the infrastructure and software we used to serve Wikispaces users.

20 Things Educators Need To Know About Digital Literacy Skills. Widely understood to be essential to success in the workplace and modern life, digital literacy is beginning to emerge as a necessary component of curricula across the globe. 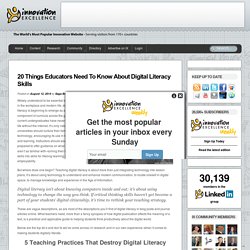 As current undergraduates have never known a life without the internet, it’s only natural that universities should nurture their familiarity with technology, encouraging its use in teaching and learning. Instructors should also be prepared to offer guidance on what students aren’t as familiar with–turning their technical skills into skills for lifelong learning and employability. But where does one begin? Teaching digital literacy is about more than just integrating technology into lesson plans; it’s about using technology to understand and enhance modern communication, to locate oneself in digital space, to manage knowledge and experience in the Age of Information. Digital literacy isn’t about knowing computers inside and out; it’s about using technology to change the way you think. 1. 2. 3. 4. 5.