My resource master list. JenFul » The best rejection letter I ever got. Business of Art Fix: Keeping The Indie Dream Alive When Talking Pay and Other Stories. Welcome to the fourth “This Business of Art / Media / Web Fix,” in which I share with you things I read that I loved relating to the work I do here — online media, business, entrepreneurship, women in tech, start-ups, journalism, publishing, management, queer visibility, and so forth. 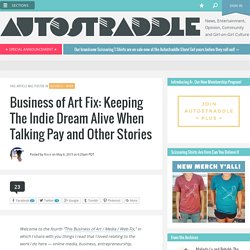 You can expect this sucker to drop every-other Wednesday. Talk, Pay! On May 1st, #Talkpay, a social media initiative launched by programmer Lauren Voswinkel of Model View Culture, proposed that anybody out there with a job and a salary post that job and that salary to twitter. The focus was on people in tech, but anybody could participate. She hoped to draw attention to pay inequality, especially “measurable pay discrepancies between groups when looking at race and gender which are further exacerbated when someone is a member of multiple minorities.” What Makes Work Meaningful? Ask a Zookeeper.

Dressed in a stained sweatshirt and serious workboots, brown hair swept up in a messy ponytail, Meghan Nemes carefully removes a cafeteria tray covered with vegetable scraps from the cage of an enormous tortoise named Rob. 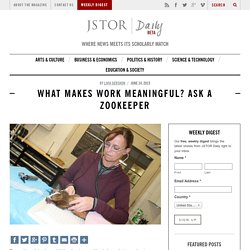 Then she scrubs the concrete floor, hoses it down, sweeps, and puts the food back. “I already cleaned him once, but he decided to pee,” she says. Nemes has a degree in zoology and nearly a decade of work experience. She estimates that she spends 90 percent of her day scrubbing, sweeping, mopping, and disposing of the feces of dozens of species of animals. Rape on the Night Shift. Search Data Security Breaches.

The Political Consequences of the Great Recession. SOURCE: AP/Stephen B. 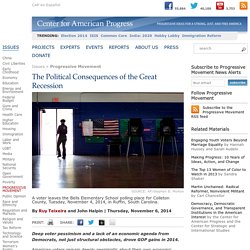 Morton A voter leaves the Bells Elementary School polling place for Colleton County, Tuesday, November 4, 2014, in Ruffin, South Carolina. By Ruy Teixeira and John Halpin | Thursday, November 6, 2014 Deep voter pessimism and a lack of an economic agenda from Democrats, not just structural obstacles, drove GOP gains in 2014. American voters remain deeply pessimistic about their own economic prospects and those of the country as a whole and distrust all major institutions of government, including the president, Congress, and both major political parties. The loss of Senate control was largely expected given the difficult task Democrats faced this year: In order to keep their majority in the Senate, they needed to hold seats in Republican-leaning states whose voting bases were more conservative, older, and less diverse.

Why did the Republicans do so well in 2014? The State of the U.S. Labor Market: Pre-October 2014 Jobs Release. SOURCE: AP/Alan Diaz Freddy Jerez fills out a job application during a job fair in Sunrise, Florida. 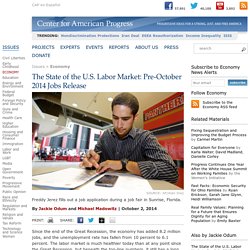 By Jackie Odum and Michael Madowitz | October 2, 2014 Since the end of the Great Recession, the economy has added 8.2 million jobs, and the unemployment rate has fallen from 10 percent to 6.1 percent. Free Dry Cleaning Offer Changes Lives Of The Unemployed. Aol's BeOn group creates custom editorial content that is sponsored by marketing partners. 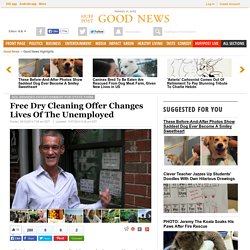 The sponsoring partners do not exert editorial influence over the content, but may be organically integrated within content in an authentic manner that does not impact editorial integrity. Carlos Vasquez owns First Professional Cleaners, a business that has helped thousands of people with one small act of kindness: free dry cleaning. When the 2008 recession hit, Vasquez noticed a change in the community. Target 'Screened Out' Black, Asian, and Women Job Applicants. Target Corp. will pay $2.8 million to more than 3,000 job applicants who vied for upper-level management positions, but were "disproportionately screened out" by an application test. 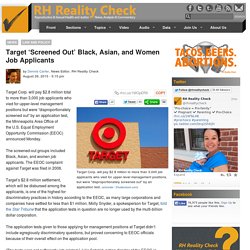 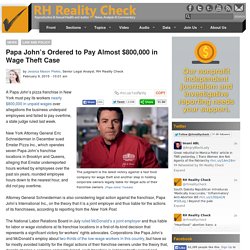 New York Attorney General Eric Schneiderman in December sued Emstar Pizza Inc., which operates seven Papa John’s franchise locations in Brooklyn and Queens, alleging that Emstar underreported hours worked by employees over the past six years, rounded employee hours down to the nearest hour, and did not pay overtime. Attorney General Schneiderman is also considering legal action against the franchisor, Papa John’s International Inc., on the theory that it is a joint employer and thus liable for the actions of its franchisees, according to reporting from the New York Post. Any legal action taken by Schneiderman would build off that July ruling and advance a similar charge that Papa John’s franchises operate through uniform standards tightly controlled by the franchise’s corporate parent. 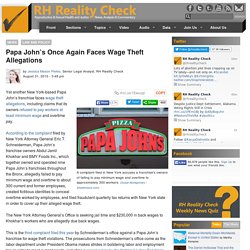 According to the complaint filed by New York Attorney General Eric T. Schneiderman, Papa John’s franchise owners Abdul Jamil Khokhar and BMY Foods Inc., which together owned and operated nine Papa John’s franchises throughout the Bronx, allegedly failed to pay minimum wage and overtime to about 300 current and former employees, created fictitious identities to conceal overtime worked by employees, and filed fraudulent quarterly tax returns with New York state in order to cover up their alleged wage theft. The New York Attorney General’s Office is seeking jail time and $230,000 in back wages to Khokhar’s workers who are allegedly due back wages.

This is the third complaint filed this year by Schneiderman’s office against a Papa John’s franchise for wage theft violations. New York’s minimum wage is $8.75 per hour. The High-Salary Trifecta: Gay, Black, and Male. Sociologists are quite familiar with the combination of marginalized identities that can lead to oppression, inequalities, and “double disadvantages.” 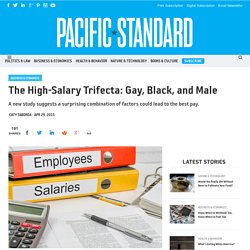 But can negative stereotypes actually have positive consequences? Financial Juneteenth recently highlighted a study showing that gay black men may have better odds of landing a job and higher salaries than their straight black male colleagues. Led by sociologist David Pedulla, the data come from resumes and a job description evaluated by 231 white individuals selected in a national probability sample. The experiment asked them to suggest starting salaries for the position and answer questions about the fictional prospective employee.

How to make sure nothing gets done at work. Joseph E. Uscinski and Joseph M. Parent, "American Conspiracy Theories" (Oxford UP, 2014) TAlkPay - Recherche sur Twitter. #talkpay surges as Twitter users fight inequality by revealing own pay. FINN.no - How much is your spare time worth. These Employers Have Decided Student Debt Repayment Is The Next Perk For Millennial Hires. As overall student debt has ballooned to $1.3 trillion, and poses a significant financial burden on young people, there may be a new trend on the horizon: Employers including loan repayment in their benefits packages to help attract younger workers. 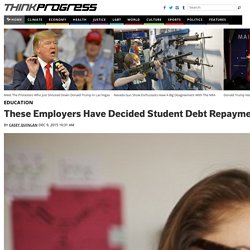 Companies that hire a high number of recent college graduates at once, such as Natixis and PricewaterhouseCoopers, are offering new employees help in paying off student loans, according to Bloomberg. The majority of employers providing the perk tend to contribute anywhere from $100 to $250 a month toward an employee’s student debt, Bloomberg reports.

Black Women File Class Action Suit Against The New York Times. A class action lawsuit filed on Thursday (April 28) alleges that The New York Times’ CEO Mark Thompson introduced a culture of “deplorable discrimination” when he joined the newspaper in 2012. According to The Guardian, two Black women who work at the institution charge that Thompson discriminates on the basis of race, gender and age. From the suit, which was filed with the U.S. How A Giant Restaurant Conglomerate Teamed Up With Banks To Stiff Its Workers. The struggling corporate giant behind The Olive Garden, Longhorn Steakhouse, and other national restaurant chains is forcing tens of thousands of workers to effectively pay rent on their own money. Workers at Darden Restaurants chains are routinely told they must accept prepaid debit cards instead of paychecks, according to a new report from the worker organization Restaurant Opportunities Center (ROC) United.

The Changing Face of America’s Electorate. SOURCE: AP/Rainier Ehrhardt Destiny Davis plays a game on a cell phone as she waits for her mother to vote at Slater-Marietta Elementary School on Election Day, November 2012. By Patrick Oakford | Tuesday, January 6, 2015 PRINT: SHARE: Endnotes and citations are available in the PDF and Scribd versions.Download the report: PDFRead it in your browser: Scribd Appendix available in the PDF and Scribd versions of this issue brief.

In the wake of the 2012 presidential election, Republican elected officials and conservative political pundits publicly bemoaned the party’s failure to connect with and win over voters of color. Republican courting of Asian voters paid off. What Happens To Democracy After You Gut The Voting Rights Act, In One Map. This year marks the first presidential election in 50 years without a functioning Voting Rights Act — and it’s not going well. Republican lawmakers have been devising efforts to make it harder for Americans to vote for many years, since the GOP took over statehouses across the country in 2010. Those efforts culminated in 2013 with the Supreme Court’s decision to strike down key portions of the Voting Rights Act (VRA), a formerly untouchable cornerstone of civil rights. Oregon’s Success Shows Way Forward for Automatic Voter Registration. GENTRIFICATION SPOTLIGHT: How Portland is Pushing Out Its Black Residents (Part 2)

In Part 1 of our report, The media has paid a lot of attention to the White “urban pioneers” ditching the city of Portland in search of greater affordability. But the city’s people of color—and particularly, Black residents—have been hardest hit by a major housing crisis there. From 2000 to 2013, White incomes grew from about $55,000 to $60,000; Black incomes fell from $35,000 to less than $30,000. One study from last year found that there is not a single neighborhood in the city where an average African-American can afford a two-bedroom apartment. Due to the combination of falling incomes and rising housing costs, the number of homeless Black people grew by 48 percent in 2015 Though they make up only 7 percent of Portland residents, Black people constitute a disproportionate 25 percent of the homeless population.