Psychological Disorder, or mental disorder, is a pattern of behavioral or psychological symptoms that affect several aspects of life and poses distress for the experiencer.

The American Psychiatric Association's diagnostic manual (DSM-5) defines mental disorder as a syndrome characterized by​ a clinically significant disturbance in an individual's cognitive, emotion regulation, or behavior that reflects a dysfunction in the psychological, biological, or developmental process. Mental disorders are usually associated with significant distress in social, occupational, or other important activities.

In Singapore, 1 in 8 people suffer from psychological disorders, 12% of the population (Singapore Mental Health Study, 2010). Major Depressive Disorder (or depression), Alcohol Abuse and Obsessive Compulsive Disorder (OCD) were found to be the top three most common disorders here (IMH, 2012).

Depression. Alcohol Abuse. Obsessive Complusive Disorder. Singapore's depression problem: Why It Matters. More people in Singapore struggling with alcohol abuse, but seeking help earlier: Study, Health News. SINGAPORE - A mental health study has shown that while alcohol abuse is a growing problem here, sufferers have been seeking help earlier. The second Singapore Mental Health Study, conducted in 2016, found that one in 24 people struggled with the problem in their lifetime, or 4.1 per cent of the population. This is up from one in 32 people in the landmark study done in 2010. Symptoms include recurrent alcohol use that affects obligations at work, school, or home.

But sufferers also sought treatment earlier – the median number of years they delayed treatment in 2016 was four years, down from 13 years in 2010. The results released on Tuesday (Dec 11) also showed that a smaller proportion, or 0.5 per cent of the population, suffered from alcohol dependence. This refers to a condition where a person is hit with withdrawal symptoms when intake is stopped, among other things.

It involved face-to-face interviews with more than 6,000 Singaporeans and permanent residents aged 18 and above. OCD one of the most common mental disorders in Singapore. SINGAPORE: Obsessive compulsive disorder (OCD) is one of most common mental health conditions here, according to findings from a nationwide study released on Tuesday (Dec 11). The disorder affected one in 28 people in their lifetime, making it the third-most prevalent condition after major depressive disorder and alcohol abuse.

The illness is commonly characterised by recurrent and persistent thoughts, impulses or images, and when severe, impedes a person's ability to function. Younger people aged 18 to 34 were more likely to have the condition than those aged 50 and above, said researchers from the Institute of Mental Health (IMH) and Nanyang Technological University (NTU), citing the findings from the second Singapore Mental Health Study. The study also found that those who had a monthly household income of between S$2,000 and S$3,999 were less likely to have the condition than those with a household income of less than S$2,000. “It’s a very neglected disorder,” said Assoc Prof Mythily. Many in Singapore unwilling to live or work with people with mental health conditions: Survey, Health News. SINGAPORE - Even as more people are seeking outpatient treatment at the Institute of Mental Health (IMH), more than five in 10 respondents of a recent survey indicated they are unwilling to live with, live nearby or work with a person with a mental health condition. 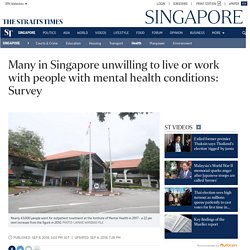 The survey, which is the first of its kind by the National Council of Social Service (NCSS), also found that six in 10 people believe that mental health conditions are caused by a lack of self-discipline and willpower. Another key finding from the survey conducted last year - half of the 1,796 respondents believe that persons with mental health conditions should not be given any responsibility.

But there were some encouraging notes in the findings, which were released on Saturday (Sept 8). The findings highlight the misconceptions and stigma suffered by persons with mental health conditions, said NCSS deputy chief executive officer Tina Hung. ‘Crazy, weird, scary’: Survey unveils negative labels youths associate with mental illness. SINGAPORE — Researchers have called for regular and compulsory education on mental health for youths, in the wake of a study that found a large proportion of this group having misconceptions of mental illness.

Almost half (44.5 per cent) of 940 teenage students polled attached negative and pejorative labels to people with mental illness. “Crazy”, “weird”, “scary”, “stupid” and “dangerous” were among the words that came to mind then the respondents heard the term “mental illness”, reported the study, which was presented at the Frontiers in Mental Health symposium organised by the Institute of Mental Health (IMH) and Nanyang Technological University’s Lee Kong Chian School of Medicine on Tuesday (March 6). Some 46.2 per cent of the respondents, who were aged between 14 and 18, also said they would be “very embarrassed” if they were diagnosed with a mental illness, while nearly a quarter (22.7 per cent) said they would not want others to know if their relative were mentally ill.

'I don't want to be Eugene Tan with bipolar': People with mental health issues face workplace discrimination. SINGAPORE: At first glance, Mr Eugene Tan’s 20-year work history shows a strong background as a counsellor and social worker. But on closer inspection, you will find that he took a year's break at the age of 24 and there have been some gaps between jobs. This was due to Mr Tan’s condition.

He has bipolar disorder - a mental condition characterised by extreme highs and lows in mood. Diagnosed with post-traumatic stress disorder after a car accident, his emotions took a turn for the worse, culminating in fits of rage and hallucinations. It was then, in 2002, that he was diagnosed as bipolar. After that, he was reluctant to declare his condition in job applications. “Once you declare, you may not even get an interview,” he told Channel NewsAsia. Food For Thought.