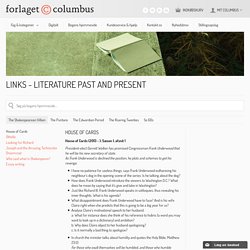 Howard Axelrod’s The Point of Vanishing, reviewed. Photo by Thinkstock When he was in his late 20s, the writer Howard Axelrod spent two years living in a remote cabin in Vermont. 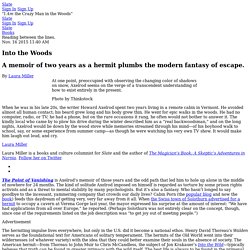 He avoided almost all human contact; his beard grew long and his body grew thin. Access to English Social Studies - engelsk Vg3. The children taken from home for a social experiment. In the 1950s, a group of Inuit children were taken from their families in Greenland to be re-educated as model Danish citizens. 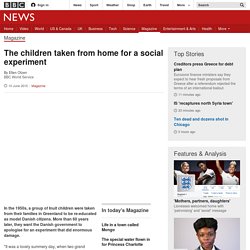 More than 60 years later, they want the Danish government to apologise for an experiment that did enormous damage. "It was a lovely summery day, when two grand Danish gentlemen showed up at our house," says Helene Thiesen. Businessinsider. Engelsk forløb - NSL tekster. How to read a novel and short story - Literature - How to analyze and write about texts. Værklæsning med Google Docs - It i gymnasiet. 25 maps that explain the English language. English is the language of Shakespeare and the language of Chaucer.

It’s spoken in dozens of countries around the world, from the United States to a tiny island named Tristan da Cunha. It reflects the influences of centuries of international exchange, including conquest and colonization, from the Vikings through the 21st century. Here are 25 maps and charts that explain how English got started and evolved into the differently accented languages spoken today. 'The Catcher in the Rye' and 'The Case for Delayed Adulthood' Photo When we choose a famous passage from a classic work like “The Catcher in the Rye” for an edition of our Text to Text series, there are literally thousands of New York Times articles with which we could profitably pair it. 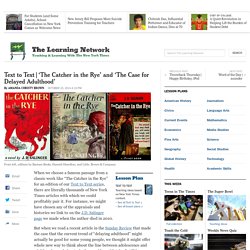 For instance, we might have chosen any of the appraisals and histories we link to on the J.D. Salinger page we made when the author died in 2010. But when we read a recent article in the Sunday Review that made the case that the current trend of “delaying adulthood” might actually be good for some young people, we thought it might offer whole new way to think about the line between adolescence and adulthood — and about whether, and how, “Catcher” still has something to say to teenagers today. 'The Catcher in the Rye' and 'The Case for Delayed Adulthood' Murder Mystery Scene 1. Stephen: Er, Ashlie, what are you doing? 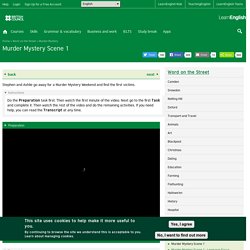 Ashlie: Looking for clues of course. Stephen: But we haven’t started yet. We’ve come away for a Murder Mystery Weekend. It’s a fun game. Rie Pedersen - Outlook Web App. Writing Exercises and Prompts. Grammatically Speaking. Have You Got a Grasp of Grammar? 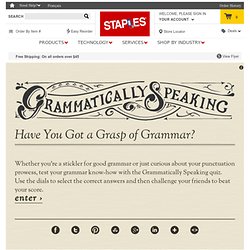 Whether you’re a stickler for good grammar or just curious about your punctuation prowess, test your grammar know-how with the Grammatically Speaking quiz. Use the dials to select the correct answers and then challenge your friends to beat your score. Why Fantasy and Why Now? by R. Scott Bakker - Articles - Science Fiction and Fantasy World. Why do people read fantasy? 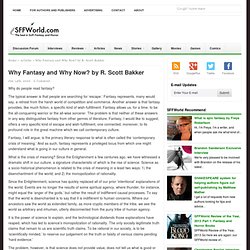 The typical answer is that people are searching for ‘escape.’ Fantasy represents, many would say, a retreat from the harsh world of competition and commerce. Another answer is that fantasy provides, like much fiction, a specific kind of wish-fulfillment. Fantasy allows us, for a time, to be the all-conquering warrior or the all-wise sorcerer. The problem is that neither of these answers in any way distinguishes fantasy from other genres of literature. Fantasy, I will argue, is the primary literary response to what is often called the ‘contemporary crisis of meaning.’ 10 Words You Need to Stop Misspelling. English news and easy articles for students of English. Shakespeare, Macbeth and the Elisabethan Era Template Complete. MacbethLessonPlans.pdf. MacbethLessonPlans.pdf. Longreads: The best long-form stories on the web.

360 FREE Warmers, Ice-Breakers and Fillers For The ESL Classroom. Planning a lesson is no easy task, especially if you're about to introduce a difficult topic. 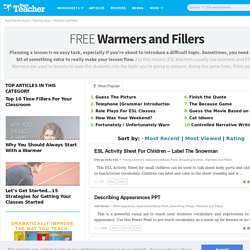 Sometimes, you need a little bit of something extra to really make your lesson flow. For this reason, ESL teachers usually use warmers and fillers. Warmers are used in lessons to ease the students into the topic you're going to present. Along the same lines, fillers are used to reinforce topics or follow up with extra practice for students. Bullying. Precious is a dramatic, but well-made movie. 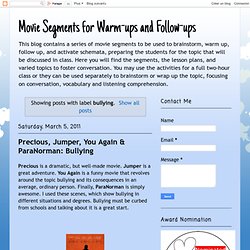 Jumper is a great adventure. You Again is a funny movie that revolves around the topic bullying and its consequences in an average, ordinary person. Finally, ParaNorman is simply awesome. I used these scenes, which show bullying in different situations and degrees. American Rhetoric: The Power of Oratory in the United States. Get English Lessons. Short stories at east of the web. A game of Scrabble has serious consequences. - Length: 4 pages - Age Rating: PG - Genre: Crime, Humor A semi-barbaric king devises a semi-barabaric (but entirely fair) method of criminal trial involving two doors, a beautiful lady and a very hungry tiger. - Length: 7 pages - Genre: Fiction, Humor He looked into her eyes. . - Length: 20 pages - Age Rating: U - Genre: Fiction When I was younger I fell in love with a performance artist. . - Age Rating: 15. Lærerens førstehjælpskasse - 111 variationer til undervisning.

Related:  reading   -  esl   -  Literature   -  literature   -  25 maps that explain the English language   -  Writing Exercises and Prompts   -  10 Words You Need to Stop Misspelling   -  English news and easy articles for students of English   -  Longreads: The best long-form stories on the web   -  360 FREE Warmers, Ice-Breakers and Fillers For The ESL Classroom   -  American Rhetoric: The Power of Oratory in the United States   -  Short stories at east of the web   -  Understand what you read   -  Education   -  Enterprise