Watch two guys in jet packs fly right next to a super jumbo jet. 2stroker comments on Green goblin. This Company Wants to Start a New Sports League with Giant Fighting Robots. Hoverbored : snopes.com. FACT CHECK: Has automaker Lexus created a real working hoverboard like the type seen in the Back to the Future films? 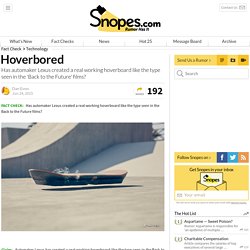 Claim: Automaker Lexus has created a real working hoverboard like the type seen in the Back to the Future films. Origins: On 23 June 2015, automaker Lexus shared a video purportedly showing a real working hoverboard of the type skateboarders have been eagerly awaiting ever since it was showcased in the 1989 film Back to the Future II: When technology, design and imagination come together, amazing things can be achieved.SLIDE is the fourth project in the ‘Amazing in Motion’ series and this time, we’ve challenged ourselves more than ever, in order to create something unique.The Lexus hoverboard represents true engineering innovation and over the coming weeks, we’ll be bringing you regular updates on the progress of this extraordinary project.

The Lexus Hoverboard Is Real And I Rode It. Japan Built a Candy-Powered Rocket. Watch A Man In A Jetpack Fly In Formation With A Plane Above Dubai. Flyboard - Coolest Water Jet Pack EVER!!! Engineering Professor: Rocket Boots Are Possible Thanks To The Segway. Why the facepalm? 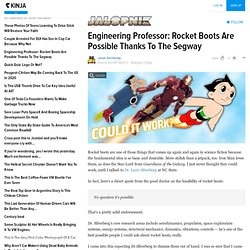 It's not just steerable, without dynamic control over center of gravity, I don't think they'd be usable at all. Except maybe as novelty slam-you-into-a-wall-then-ground boot. I guess your saying without the Segway, some manner of rocket boot could still exist? Forgive me, I'm just trying to see if I need to clarify something. クラタス_動作テスト 【V-Sido】 Parajet SkyCar flying vehicle evolves, now ready for pre-orders. Buy Your Own Jetpack. A jetpack produced by New Zealand-based Martin Aircraft is about go into production. 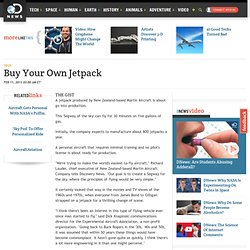 This 'Segway of the sky' can fly for 30 minutes on five gallons of gas. Initially, the company expects to manufacture about 800 jetpacks a year. A personal aircraft that requires minimal training and no pilot's license is about ready for production. "We're trying to make the world's easiest-to-fly aircraft," Richard Lauder, chief executive of New Zealand-based Martin Aircraft Company tells Discovery News.

"Our goal is to create a Segway for the sky, where the principles of flying would be very simple. " It certainly looked that way in the movies and TV shows of the 1960s and 1970s, when everyone from James Bond to Gilligan strapped on a jetpack for a thrilling change of scene. "I think there's been an interest in this type of flying vehicle ever since man started to fly," said Dick Knapinski communications director for the Experimental Aircraft Association, a non-profit organization. Neverwas Haul 2010. Huge Russian Hovercraft Interrupts Beachgoers in Spectacular Fashion. Either that, or the frenzy it would create if hovercrafts crashing parties became a huge sensation. 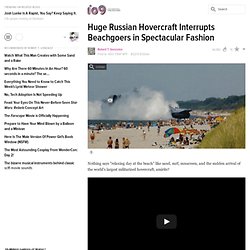 I can see it now - the county fair has a flyover by the national guard at 9:00, followed by a speech from the governor, and the hovercraft docks at 0930. A11 ur b34ch3z b3l0n6 t0 uz!!! The first time, sure. Machine Test. Parajet SkyCar flying vehicle evolves, now ready for pre-orders - Engadget Galleries. Plastic flying carpet is kept afloat by ripple power. A Princeton grad student named Noah Jafferis has invented a flying carpet, of sorts. 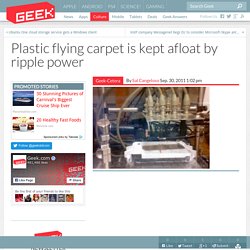 Rather than a magic lamp (or one’s imagination) this flying carpet is kept afloat using ripple power, something similar to how a skate or ray travels through the water. As a movement system the flying carpet design is interesting because it has no moving parts, which makes it ideal for use in adverse environments. Right now the flying carpet is simply a prototype that is just four inches across.

The carpet is made of a piece of thin, conductive plastic that is tethered to the power source using wires. Because of the small size of the plastic sheet and the early stage of the prototype, it can’t yet support its own power source. While “flying carpet” is a handy way to describe the project, the sheet doesn’t actually fly. The problem now, based on early reports, is that of propulsion and lift. Traveling Wave paper, via BBC.

ド派手LEDランボルギーニ軍団 夜間首都高爆走編 Tokyo Midnight Lambo Run- Japan LED Lamborghini Crew- Steve's POV スティーブ的視点. The 9 Most Insane Vehicles That Are Street Legal. Even if you're not really into cars, everyone has a dream vehicle. 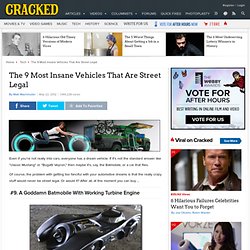 If it's not the standard answer like "classic Mustang" or "Bugatti Veyron," then maybe it's, say, the Batmobile, or a car that flies. Of course, the problem with getting too fanciful with your automotive dreams is that the really crazy stuff would never be street legal. Or would it? After all, at this moment you can buy ... #9. Via Extravaganzi.com Oh, hell yes. The good people at Putsch Racing hereby bring you this perfectly functional, street legal replica of the 1989 Tim Burton movie version of the Batmobile. As roughly 120 percent of Cracked readers are dedicated Batman fans, chances are you're looking at the epitome of every automotive fantasy you've ever had.

Via Unfinishedman.com"Sir, we're willing to turn a blind eye to all that smack you've been smuggling in exchange for one five-minute ride. " And the people at Putsch didn't set out to make just any old movie replica, either.