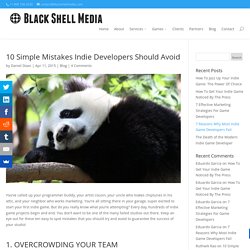 You’re all sitting there in your garage, super excited to start your first indie game. But do you really know what you’re attempting? Every day, hundreds of indie game projects begin and end. You don’t want to be one of the many failed studios out there. Keep an eye out for these ten easy to spot mistakes that you should try and avoid to guarantee the success of your studio! You’ve probably heard the saying “too many cooks spoil the broth.” There’s one word that will rule your life as soon as you get into the world of development: scope. Powerful tools like GameMaker: Studio and Unity3D exist for a reason—to make your life simple.

One major piece of advice for aspiring game devs? If you work yourself to death, nothing good will come of it. There’s a reason services like Trello, Dropbox, and Google Apps For Business were created. Retridemption sur Twitter : "This madness, this obsession – it gnaws me, craves me, and I desire it - Cain @thehuntersjrpg #gamedev #indiedev. An indie JRPG project. One Physical Step… I returned home, not feeling very re-energised but certainly glad I was. 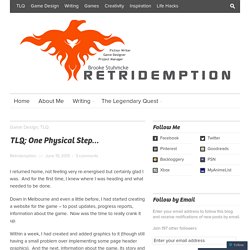 And for the first time, I knew where I was heading and what needed to be done. Down in Melbourne and even a little before, I had started creating a website for the game – to post updates, progress reports, information about the game. Now was the time to really crank it up. Time in Another Realm. Here I am! 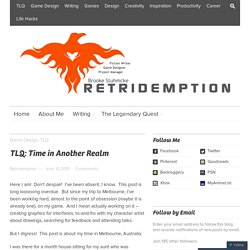 Don’t despair! I’ve been absent, I know. This post is long looooong overdue. Retridemption sur Twitter : "I think my @trello #gamedev #indiedev #agile board had children O_O... Mega Downloads and Tutorials for UDK. This section provides you with the best sites for beginner tutorials, resources and video files for you to download. 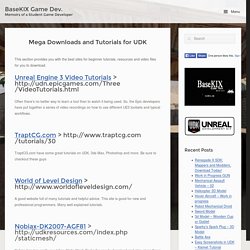 Often there’s no better way to learn a tool than to watch it being used. So, the Epic developers have put together a series of video recordings on how to use different UE3 toolsets and typical workflows. TraptCG.com have some great tutorials on UDK, 3ds Max, Photoshop and more. Ratalaika Games sur Twitter : "10 Tips To Help Supercharge Your Game Development Career! #gamedev #indiedev #gamersunite. 10 Tips To Help Supercharge Your Game Development Career - Black Shell Media. We will receive an email from time to time that asks for some tips on game development. 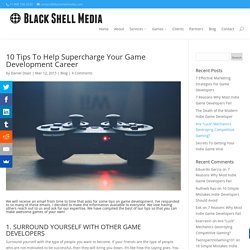 I’ve responded to so many of these emails. I decided to make the information available to everyone. We love having others reach out to us and ask for our expertise. Starfall Tactics sur Twitter : "Working 8am-2am, 3 days straight. Still happy. DOING WHAT? Preparing for our #Kickstarter of course ;) #gamedev. Bacubacu sur Twitter : "Making a videogame is not an easy task! #indiedev #gamedev #indiegamedev... Game Designers Guild. Group LF Juggernaut, off-spec Cheerleader. I need to recruit a juggernaut. 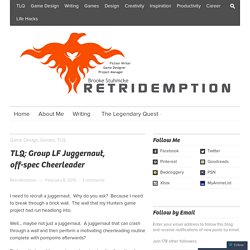 Why do you ask? Because I need to break through a brick wall. The wall that my Hunters game project had run headlong into. Well… maybe not just a juggernaut. Asset Store - Treasure Chest Maker. Battlestation: Humanity's Last Hope by Bugbyte - LudiBooster » Updates. Thank you for believing in Battlestation! 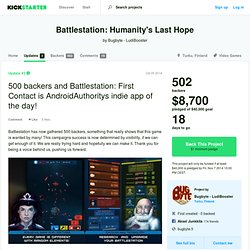 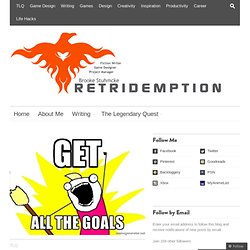 Saying that is a harsh reality, but reality it is. These are the ones I haven’t completed to date: Why haven’t I achieved these? The biggest problem I have was severely underestimating the time needed to complete these. Retridemption on Twitter: "Hunters #gamedev #indiedev concept art! Done by me. Ha ha... I know. Bad huh? Retridemption : #gamedev - the dialogue boss ... Witter / ? Retridemption : Today's to-do list from @habitrpg ... TLQ: Checking over the Quest Log. Sometimes I think I’m focusing on my Hunters goal more than I should be. 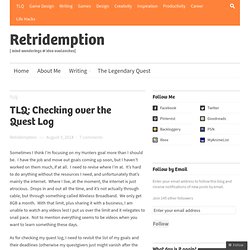 I have the job and move out goals coming up soon, but I haven’t worked on them much, if at all. I need to revise where I’m at. It’s hard to do anything without the resources I need, and unfortunately that’s mainly the internet. Where I live, at the moment, the internet is just atrocious. Drops in and out all the time, and it’s not actually through cable, but through something called Wireless Broadband. As for checking my quest log, I need to revisit the list of my goals and their deadlines (otherwise my questgivers just might vanish after the due date!).

Plus this due on August 5, 2014. Wow, this looks like a lot. Retridemption : This also applies to all you ... Game Design Document Template. There are so many aspects to a game that when you’re designing one, you don’t think about them all. 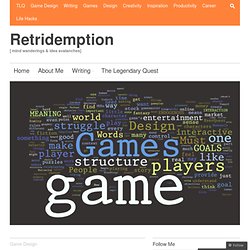 That’s where a game design document comes in handy. Creating these really helped by forcing me to consider all of the features and how they should integrate together. What I did with these was print out all the pages and physically write on them. Actually writing it down, I feel, concretes that version of the idea. Otherwise it’s still floating around half-formed. Storyboard Template. As mentioned in my latest The Legendary Quest post My Mount is a Drama Llama, I created a storyboard template that suited my needs as a game designer. Here are the links to the document: Storyboard Template.docx – for most current Word versions. Retridemption : What this #gamedev runs on ...

In this series I'll show you how to build a simple, basic version of the classic game Minesweeper, which is the perfect example to start from for creating your own puzzle games. Whether you're making a children's memory game or a complex strategy title, implementing the basic building blocks of Minesweeper are a great place to start. In the first part of this three-part tutorial series, we'll build a playing field you can then use to create your own version of the game. You'll need Unity for this, and a basic understanding of it. (Check out Build Arkanoid With Unity if you're new at it.) TLQ: The Cold Debuff. Ugh… Right when I’m in the middle of charging up to do an all-out attack, this smacks me in the face. A two-pronged debuff of being sick with a cold, and the cold itself. It’s winter in Australia at the moment, and it is the coldest I’ve experienced in a long time.

I really really dislike the cold. And being sick when it’s this chilly is just terrible. TLQ: Dissecting level 1 mobs? Nope, dissecting goals! The objective of my first quest in this long, legendary chain: split all my written goals into doable tasks and then organise them into some sort of structure that helps me achieve them. Okay. Here we go. When I looked at my goals and thought about splitting them up, I had the sudden feeling of being overwhelmed. I still do every time I look at them. Mostly because as I write this post, I’ve still yet to split up 5 out of the 6. So, yes, working on it. As I wrote down each heading, and then each individual section underneath it as a list, I began to realise something. ONLINE GAME DEVELOPMENT. Menu. Vlambeer. Gamebrief. Game Design Concepts. Game Development Community. Learn to be more creative. Open Source Game Development. Hyperbole Games.

A Method for Developing Game Concepts. 5 Alternatives to a Game Design Doc « Gravity Ghost. Game Design, Psychology, Flow, and Mastery - Articles - Slippery Slope and Perpetual Comeback. If a game has slippery slope, it means that falling behind causes you to fall even further behind. For example, imagine that every time your team scored in basketball that the opponent’s team lost a player. In that game, falling behind is doubly bad because each basket counts for score AND it makes the opposing team less able to score points of its own. The actual game of basketball does not have this screwy feature though, so real basketball does not have slippery slope. Scoring in real basketball puts you closer to winning but does not at all hamper your opponents’ ability to score. Slippery slope is another name for positive feedback, a loop that amplifies itself as in a nuclear reaction.

Resources. Art. Forums. Ui. Narrative. Articles. Programming. How to Build a JRPG: A Primer for Game Developers. Game Pitches. Getting Your Game Reviewed: Do These Things, Not Those Things… Game design word cloud. HabitRPG by Tyler Renelle. (Follow updates here) HabitRPG is a habit tracker app which treats your goals like a Role Playing Game. Level up as you succeed, lose HP as you fail, earn money to buy weapons and armor. Read more. The project is open source, and is live. Website bug fixes like whoa! Since the Kickstarter began, the following features have been added: Game Idea Generator. So Here Are My Ideas.