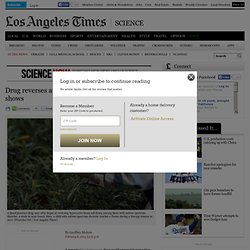 Injecting pregnant mice with Bumetanide, a diuretic, appears to correct a developmental switch flipped during childbirth that reverses the firing characteristics of neurons in newborns, according to a study published online Thursday in the journal Science. Bumetanide mimics the effects of oxytocin, a hormone released during labor that helps protect newborns from the stresses and complications of birth, the study found. That surge of oxytocin changes the way a neurotransmitter regulates neurons -- it no longer encourages the firing of neurons and becomes a kind of electrochemical brake in the adult brains. Overly excited brain circuits are strongly linked with autism spectrum disorder, a disease that strikes an estimated 1 of every 88 children, causing them to have restricted interests, and impaired communication and social skills. Gut bacteria found to reverse autism-related social behavior. Published today in Cell, the study found that the addition of the bacteria Lactobacillusreuteri, which is commonly found in human breast milk, increased the likelihood that previously antisocial mice would interact with each other. 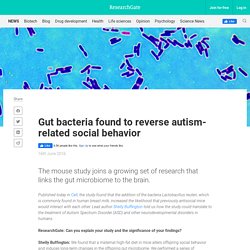 Lead author Shelly Buffington told us how the study could translate to the treatment of Autism Spectrum Disorder (ASD) and other neurodevelopmental disorders in humans. ResearchGate: Can you explain your study and the significance of your findings? Can autism be treated with a simple microbial-based therapy? Researchers at Baylor College of Medicine have successfully reversed social deficits associated with autism spectrum disorders (ASD) in mice through a bacterial-based therapy. 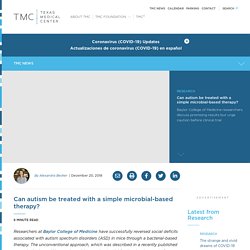 The unconventional approach, which was described in a recently published paper in the journal Neuron, has widespread potential for the development of noninvasive therapies for autism and suggests a future in which the microbiome plays a major role in the treatment of neurological conditions. TMC News Senior Writer Alexandra Becker sat down with the paper’s authors, Mauro Costa-Mattioli, Ph.D., professor and Cullen Foundation Endowed Chair of Neuroscience and director of the Memory and Brain Research Center at Baylor College of Medicine, and first author Martina Sgritta, Ph.D., a postdoctoral associate in the Costa-Mattioli lab, to discuss their findings. 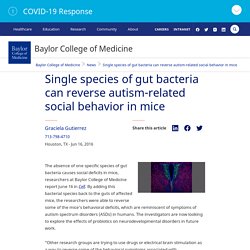 They bred the mice and waited for them to bear young. The offspring stayed with their mother for three weeks and were then weaned onto a normal diet. After a month, these offspring showed behavioral deficits, such as spending less time in contact with their peers and not initiating interactions. “First we wanted to see whether there was a difference in the microbiome between the offspring of mouse mothers fed a normal diet versus those of mothers fed a high-fat diet. So, we used 16S ribosomal RNA gene sequencing to determine the bacterial composition of their gut.

Buffington next tested whether the specific differences in the microbiome were causative factors underlying the social impairments in offspring of mothers fed a high-fat diet. Others who contributed to the research include Gonzalo Viana Di Prisco, Thomas A. Microbial-based treatment reverses autism spectrum social deficits in mouse models. An unconventional approach has successfully reversed deficits in social behaviors associated with autism spectrum disorders (ASD) in genetic, environmental and idiopathic mouse models of the condition. 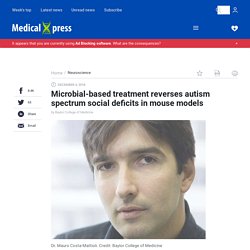 Researchers at Baylor College of Medicine report in the journal Neuron that administration of the bacterium Lactobacillus reuteri could lead to specific changes in the brain that reverse social deficits through a mechanism that involves the vagus nerve and the oxytocin-dopamine reward system. These findings hold hope for the development of novel therapies for neurological disorders by modulating specific microbes in the gut. A commensal microbe reverses autism spectrum social deficits in mice. What is already known on this topicAutism spectrum disorder (ASD) is a range of neurodevelopmental disorders whose symptoms include problems in social interaction, language difficulties, and repetitive behaviors. 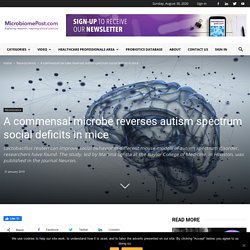 At the moment, there is no cure for the core symptoms of ASD, but studies have shown that the commensal species Lactobacillus reuteri can reverse social deficits in one of the animal models of ASD.What this research addsThe researchers further investigated the role of L. reuteri in ASD mouse models and found that this microbe alone could lead to specific changes in the brain that reverse social deficits in three of these models.ConclusionsThe results provide new insight into how L. reuteri influences brain function in mice. 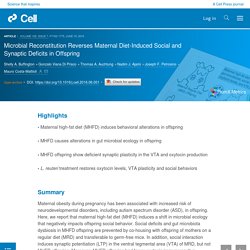 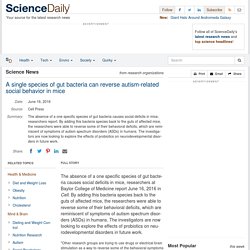 By adding this bacteria species back to the guts of affected mice, the researchers were able to reverse some of their behavioral deficits, which are reminiscent of symptoms of autism spectrum disorders (ASDs) in humans. The investigators are now looking to explore the effects of probiotics on neurodevelopmental disorders in future work. "Other research groups are trying to use drugs or electrical brain stimulation as a way to reverse some of the behavioral symptoms associated with neurodevelopmental disorders -- but here we have, perhaps, a new approach," says senior author Mauro Costa-Mattioli, a neuroscientist at Baylor College of Medicine.