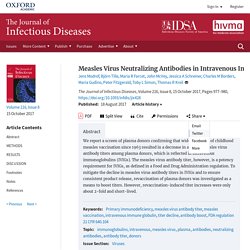 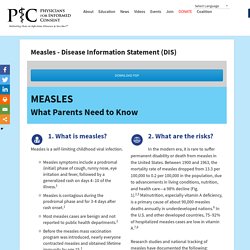 What are the risks? In the modern era, it is rare to suffer permanent disability or death from measles in the United States. Between 1900 and 1963, the mortality rate of measles dropped from 13.3 per 100,000 to 0.2 per 100,000 in the population, due to advancements in living conditions, nutrition, and health care—a 98% decline (Fig. 1).2,5 Malnutrition, especially vitamin A deficiency, is a primary cause of about 90,000 measles deaths annually in underdeveloped nations.6 In the U.S. and other developed countries, 75–92% of hospitalized measles cases are low in vitamin A.7,8. Measles – Vaccine Risk Statement (VRS) – Physicians for Informed Consent. 1. 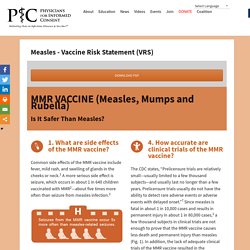 What are side effects of the MMR vaccine? Common side effects of the MMR vaccine include fever, mild rash, and swelling of glands in the cheeks or neck.1 A more serious side effect is seizure, which occurs in about 1 in 640 children vaccinated with MMR2—about five times more often than seizure from measles infection.3 The World Health Organization (WHO) states that serious allergic reactions to the vaccine occur in about 1 in 100,000 doses.4 However, other severe side effects include deafness, long-term seizures, coma, lowered consciousness, permanent brain damage, and death.1 While the Centers for Disease Control and Prevention (CDC) states that these side effects are rare, the precise numbers are unknown.1 Additionally, the manufacturer’s package insert states, “M-M-R II has not been evaluated for carcinogenic or mutagenic potential, or potential to impair fertility.”5 2.

How are risks of vaccine side effects measured? 3. Measles vaccine failure - PubMed - NCBI. What is Measles History in America - National Vaccine Information Center. Measles was first described in the 9th century by Persian physician-philosopher Zakariya Razi. 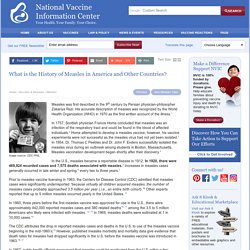 His accurate description of measles was recognized by the World Health Organization (WHO) in 1970 as the first written account of the illness.1 In 1757, Scottish physician Francis Home concluded that measles was an infection of the respiratory tract and could be found in the blood of affected individuals.2 Home attempted to develop a measles vaccine, however, his vaccine experiments were not successful as the measles virus had not yet been isolated.3 In 1954, Dr. Thomas C Peebles and Dr. John F. Enders successfully isolated the measles virus during an outbreak among students in Boston, Massachusetts.

In the U.S., measles became a reportable disease in 1912. Art20649. Measles Outbreak with Unique Virus Genotyping, Ontario, Canada, 2015. Measles Outbreak Traced to Fully Vaccinated Patient for First Time. Get the measles vaccine, and you won’t get the measles—or give it to anyone else. Right? Well, not always. A person fully vaccinated against measles has contracted the disease and passed it on to others. The startling case study contradicts received wisdom about the vaccine and suggests that a recent swell of measles outbreaks in developed nations could mean more illnesses even among the vaccinated. When it comes to the measles vaccine, two shots are better than one. That’s why a fully vaccinated 22-year-old theater employee in New York City who developed the measles in 2011 was released without hospitalization or quarantine.

A closer look at the blood samples taken during her treatment revealed how the immune defenses of Measles Mary broke down. By analyzing her blood, the researchers found that Measles Mary mounted an IgM defense, as if she had never been vaccinated. Outbreak of measles among persons with prior evidence of immunity, New York City, 2011. - PubMed - NCBI. Measles Outbreak Among Previously Immunized Healthcare Workers, the Netherlands, 2014. - PubMed - NCBI.

An increasing, potentially measles-susceptible population over time after vaccination in Korea. - PubMed - NCBI. MMRV remains associated with increased risk for febrile seizures. The measles-mumps-rubella-varicella vaccine was associated with a nearly twofold increase in risk for febrile seizures in children aged 12 to 23 months during the 7 to 10 day period after vaccination, according to a in a recently published study. 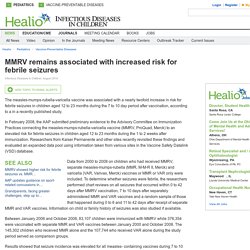 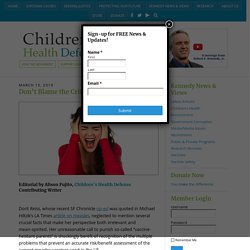 This was known at least 7 years ago, when Drs. Poland and Jacobson published their findings: 2-10% of people receiving MMR are “non-responders,” and fail to produce antibodies. The same year, Drs. 15.5% of study subjects vaccinated per current recommendations (2 shots) had zero antibodies within 20 years. 18% had antibodies in the low-to-zero range within 5 years of their second shot.Even after THREE shots (one more than current recommendations), 10.5% had zero measurable antibodies within 20 years. Herd immunity can only occur when the herd has lifetime immunity. Waning Antibody Levels and Avidity: Implications for MMR Vaccine-Induced Protection. 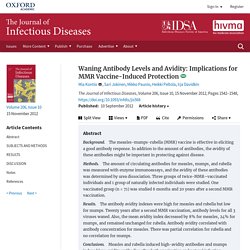 The Re-Emergence of Measles in Developed Countries: Time to Develop the Next-Generation Measles Vaccines? Measles virus for cancer therapy. REGRESSION OF BURKITT'S LYMPHOMA IN ASSOCIATION WITH MEASLES INFECTION. Acute Encephalopathy Followed by Permanent Brain Injury or Death Associated With Further Attenuated Measles Vaccines: A Review of Claims Submitted to the National Vaccine Injury Compensation Program. Wild vs Artificial Exposure to Measles Are Not Equal. The Unreported Health Benefits of Measles. Measles virus infection in rhesus macaques: altered immune responses and comparison of the virulence of six different virus strains. - PubMed - NCBI. Contraindications for MMR:M-M-R ® II is contraindicated in certain individuals, including those with: a history of hypersensitivity to any component of the vaccine, including gelatin; a history of anaphylactic or anaphylactoid reaction to neomycin; blood.