ADF: Ár nDraíocht Féin: A Druid Fellowship. (The following is a short paper I wrote as an undergraduate on the topic of the Slavic Paganism. 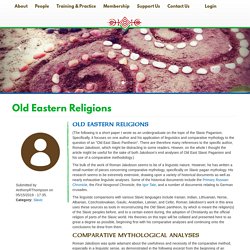 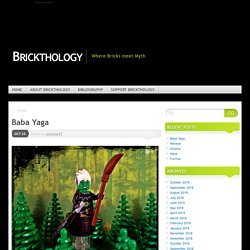 Vampires Of The Slavs : Jan L. Perkowski : Free Download, Borrow, and Streaming. Russia in Medieval Trade Routes – Mythic Russia. Untitled. Forever intertwined, Morana, goddess of winter and death, and Vesna, goddess of spring and rebirth, could not exist without each other. 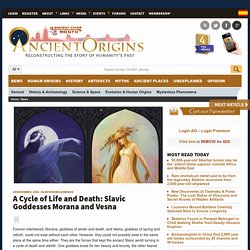 However, they could not possibly exist in the same place at the same time either. They are the forces that kept the ancient Slavic world turning in a cycle of death and rebirth. One goddess loved for her beauty and bounty, the other feared and hated for her ugliness and darkness. The modern traditions are an echo of how these two were once celebrated and ritually murdered, and they show how interconnected the goddesses were, and continue to be. 10 Slavic Gods You Should Know About – Slavorum. Slavic mythological places. In the beliefs of the Slavs, there were many Slavic mythological places, places that could not be visited because nobody knows where they are. 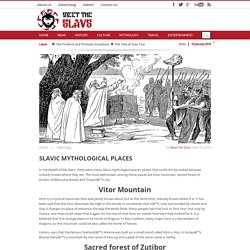 The most well known among those places are Vitor mountain, sacred forest of Zutibor (Yellow pine forest) and Troyanâ€™s city. Vitor Mountain. Bulgarian Magical Healers. Psoglav. Psoglavs were described to live in caves or in a dark land which has plenty of gemstones, but no sun.[1] They practice anthropophagy, by eating people, or even digging out corpses from graves to eat them.[1] In the Croatian language, the term is Psoglavac. 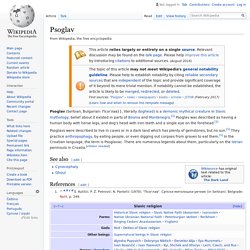 There are numerous legends about them, particularly on the Istrian peninsula in Croatia. [citation needed] See also[edit] References[edit] ^ Jump up to: a b c d Š. Baba Yaga – The Mythical Forest Witch from Slavic Folk Tales – Slavorum. Baba Yaga is one of the most famous character that we can find in Slavic mythology. 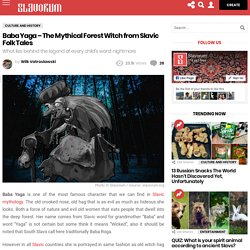 The old crooked nose, old hag that is as evil as much as hideous she looks. Both a force of nature and evil old women that eats people that dwell into the deep forest. Her name comes from Slavic word for grandmother “Baba” and word “Yaga” is not certain but some think it means “Wicked”, also it should be noted that South Slavs call here traditionally Baba Roga. However in all Slavic countries she is portrayed in same fashion as old witch hag that dwells in forest and preys on lost wanderers, certainly something you would not want to come across. This is why mentioning her to young kinds has become popular in Slavic countries to keep your children quiet before sleep or she would come and punish them.

Who did ancient Slavs pray to before Christianity came to Rus’? The Temple of a Slavic god. 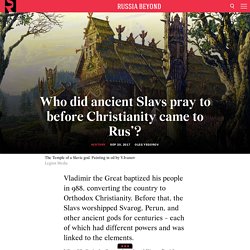 Painting in oil by V.Ivanov Legion Media. Reanimating Slavic gods: The man who breathes life into deities. Igor Ozhiganov from the Russian city of Yoshkar-Ola revives characters, gods, and mythical creatures from ancient Slavic fairy tales - and the public loves him. 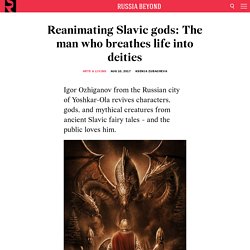 The Kalinin bridge, the location of a legendary fight of the Russian bogatyrs against Zmey Gorynych / Igor Ozhiganov These stunning pictures of Slavic mythological characters were created by a Russian artist from Yoshkar-Ola in the Mari El Republic in Russia’s eastern reaches. Nøkk & Myling: Slavic Mythology I: Water Spirits, Demons, and Creatures. Rusalka A rusalka is a female ghost, water nymph, succubus or mermaid like-demon in Slavic mythology that dwells in waterways. 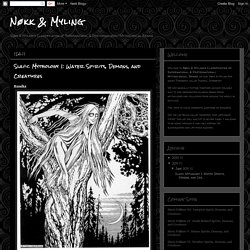 The plural is rusalki or rusalky. There are many different variations of how one becomes a rusalka, but they are always women (usually virgins) who died before their time near water. They become rusalki either because they are unclean souls or souls who suffered violent deaths. Unclean souls could be those of unbaptized babies, babies born out of wedlock (and drowned by their mothers) or suicide victims.

After they have died they will haunt the water which they died in or near until and they will finally be able to rest when their deaths are avenged. Slavic Deities. We’re all well familiar with the mythology surrounding the ancient gods such as Zeus, Odin, Jupiter, Venus, Aphrodite, etc; but do you know who deities of the ancient Slavs were, or what were their names? 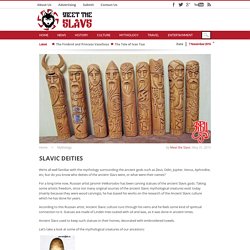 For a long time now, Russian artist Jaromir Velikorodov has been carving statues of the ancient Slavic gods. Taking some artistic freedom, since not many original sources of the ancient Slavic mythological creatures exist today (mainly because they were wood carvings), he has based his works on the research of the Ancient Slavic culture which he has done for years. According to this Russian artist, Ancient Slavic culture runs through his veins and he feels some kind of spiritual connection to it. Statues are made of Linden tree coated with oil and wax, as it was done in ancient times. Russian Superheroes: Slavic fairy tales in perfectly detailed sketches. The first characters were based on the author’s feelings and fantasies. The more the author got immersed in the subject, the more accurate his pictures became. Scroll down to see more Roman 'Amok' Papsuev In his spare time Russian illustrator Roman Papsuev ( @amokrus ) draws sketches inspired by Russian fairy tales.

Characters of Russian folklore are reinterpreted in modern gaming-fantasy style. // Baba Yaga The first characters were based on the author’s feelings and fantasies. Dobrynya Nikitich is the second bogatyr, after Muromets. Alyosha Popovich is the third most important hero. // The more the author got immersed in the subject, the more accurate his pictures became. “What I like most is when people look at my pictures and then begin to read the tales and understand why, for instance, Vasilisa the Beautiful has a doll in her bag or why Vodyanoy rides a giant catfish.