Dissertation. Religious abuse, homophobia and singing corpses are the unlikely ingredients propelling Hozier to rock stardom - Music - Going Out - London Evening Standard. “I always stand by the song and the point that the video made, so it’s never a chore,” the quiet Irishman tells me. 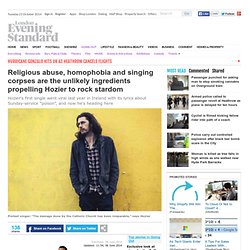 Theresa May will ban extremists from speaking in public or spreading poison on social media. Theresa May will ban preachers of hate from spreading their poison onlineSaid the Extremist Disruption Orders will also stop them publicly speakingClaims fanatics are creating 'environment' where violent acts are acceptableHome Secretary said: 'We want free speech but we do not want incitement' By James Slack and Jason Groves for the Daily Mail Published: 22:43 GMT, 29 September 2014 | Updated: 06:24 GMT, 30 September 2014 Preachers of hate will be banned from public speaking or spreading their poison on social media, under sweeping new powers unveiled today. 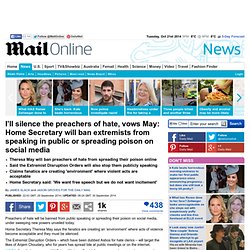 Home Secretary Theresa May says the fanatics are creating an ‘environment’ where acts of violence become acceptable and they must be silenced. The Extremist Disruption Orders – which have been dubbed Asbos for hate clerics – will target the likes of Anjem Choudary, who for years has spread bile at public meetings or on the internet. VIDEO Scroll down to see UK Prime Minister David Cameron speak out against extremism. Equal marriage - Creating a fairer and more equal society - Policies. Vatican urged to overturn ban on women priests. An international meeting of Catholic women priests, women bishops and their support groups which met in Co Louth at the weekend has said the Vatican must overturn its ban on women's ordination. 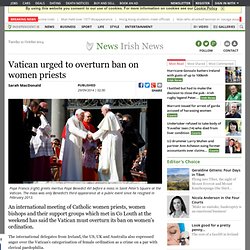 The international delegates from Ireland, the US, UK and Australia also expressed anger over the Vatican's categorisation of female ordination as a crime on a par with clerical paedophilia. Barney Frank: Transgender people don’t have rights legislation because they wouldn’t help lobby. Retired congressman Barney Frank has attacked the head of the Human Rights Campaign for apologising to trans groups, and claimed trans people are only excluded from rights legislation because they wouldn’t help lobby for it. 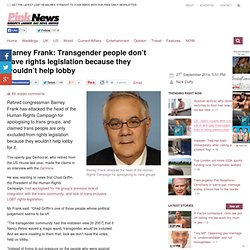 The openly gay Democrat, who retired from the US House last year, made the claims in an interview with the GaVoice. He was reacting to news that Chad Griffin, the President of the Human Rights Campaign, had apologised for his group’s previous lack of integration with the trans community, and lack of trans-inclusive LGBT rights legislation. Date set for first same-sex marriages in Scotland. 13 October 2014Last updated at 09:40 ET The first same sex weddings in Scotland are to take place on 31 December Same-sex couples will be able to get married in Scotland from the end of the year, ministers have announced. 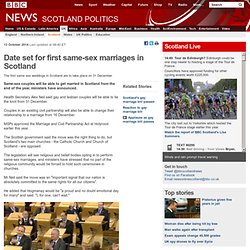 Health Secretary Alex Neil said gay and lesbian couples will be able to tie the knot from 31 December. Couples in an existing civil partnership will also be able to change their relationship to a marriage from 16 December. O'Keefe video: Gay rights leader says Mark Pryor supports gay marriage. James O'Keefe, a conservative filmmaker known for guerrilla documentaries targeting liberals, sent a hidden camera into a recent Democratic fundraising event in ArkansasThe leader of the state's Young Democrats gay caucus explained that while Sen. 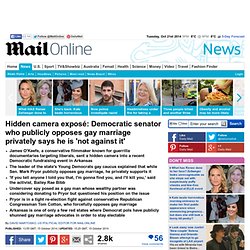 Mark Pryor publicly opposes gay marriage, he privately supports it'If you tell anyone I told you that, I'm gonna find you, and I'll kill you,' said the activist, Bailey Rae Bibb Undercover spy posed as a gay man whose wealthy partner was considering donating to Pryor but questioned his position on the issue Pryor is in a tight re-election fight against conservative Republican Congressman Tom Cotton, who forcefully opposes gay marriageArkansas is one of only a few red states where Democrat pols have publicly shunned gay marriage advocates in order to stay electable By David Martosko, Us Political Editor for MailOnline Published: 13:55 GMT, 15 October 2014 | Updated: 15:25 GMT, 15 October 2014. Obama praises Supreme Court on gay marriage, has no plans to be a justice.

The life of a Supreme Court justice would be “a little bit too monastic” for President Obama, according to an interview he gave the New Yorker about his legal legacy. 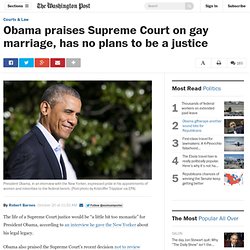 Obama also praised the Supreme Court’s recent decision not to review lower-court rulings that struck down state prohibitions on same-sex marriage, saying he believes that the Constitution provides gays the right to marry. And he said that 81-year-old Justice Ruth Bader Ginsburg “gets to decide, not anybody else, when she chooses to go” into retirement.

Obama made the remarks to the magazine’s legal correspondent, Jeffrey Toobin. Toobin noted that the president has now nominated about a third of the nation’s federal judges — including Justices Sonia Sotomayor and Elena Kagan — and that on nine of the nation’s 13 appeals circuits, a majority of judges were chosen by Democratic presidents. When Obama took office, Republican appointees were a majority on 10 of the circuits. Lawsuit challenges Mississippi gay marriage ban. Two same-sex couples seeking marriage equality in Mississippi filed the first federal challenge to the state's gay marriage ban on Monday, the latest in a string of similar lawsuits nationwide. 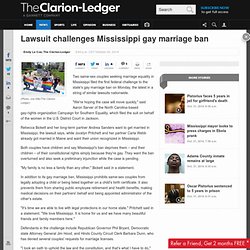 "We're hoping the case will move quickly," said Aaron Sarver of the North Carolina-based gay-rights organization Campaign for Southern Equality, which filed the suit on behalf of the women in the U.S. District Court in Jackson. NYC Councilman Corey Johnson Introduces Groundbreaking Transgender Birth Certificate Legislation. A bill introduced yesterday by New York City councilman and LGBT rights activist Corey Johnson aims to change the law under which transgender people wishing to change sex on their birth certificate must prove that they have had “corrective surgery,” reports Capital New York. 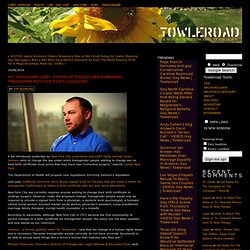 The Department of Health will propose new regulations mirroring Johnson's legislation. Last year, California Governor Jerry Brown signed a bill on Tuesday that will make it easier for transgender Californians to obtain a birth certificate with sex and name alterations. New York City law currently requires anyone wishing to change their birth certificate to undergo surgery. Red Hot: rebranding the ginger male. The 'man bag', from object of ridicule to object of desire. David Beckham: 'It's important that my children see me working hard' Body confidence: We urgently need to help teens with their self-esteem issues. Lesbian kissing row: I was thrown off a bus for snuggling up to my girlfriend. Apple and Facebook just got darker: freezing female employees' eggs is anything but kind. Now, two of the American tech giants, Apple and Facebook, are pushing the boundaries of company culture once again: they will pay for female employees to freeze their eggs. 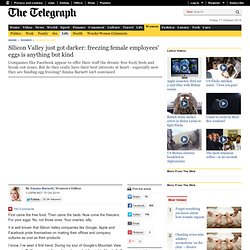 There won’t be facilities on site in offices, well not yet. No, these corporate behemoths are willing to put up £12,000 towards the cost of the whole experience in order to allow women to focus on their careers. Gen Z, Gen Y, baby boomers – a guide to the generations. Just wait until the children of Brad Pitt and Angelina Jolie hit the scene. Generation Y Also known as Millennials, born between about 1980 and 2000. Born between the advent of the Walkman and the founding of Google, the members of Gen Y are unsurprisingly shaped by technology. I-D Magazine. I-D Magazine Chanel Protest. I-D Magazine Chanel Protest. I-D Magazine. I-D Magazine. Karl Lagerfeld’s new look for Chanel: feminist protest and slogans. Karl Lagerfeld, who once dismissed concerns over size-zero models as the whinings of “fat mommies with bags of crisps”, is an unlikely champion of feminism as a fashionable issue.

How, then, to interpret his Chanel catwalk show at Paris fashion week, which closed with a megaphone-wielding Cara Delevingne leading a model army chanting for freedom, the Kardashian-clan catwalk star Kendall Jenner holding a banner reading Women’s Rights are More than Alright, and a sea of placards reading Ladies First, History is Her Story, We Can Match the Machos and Boys Should Get Pregnant Too? It is probably worth remembering that one of Lagerfeld’s many quotes is: “Everything I say is a joke. I myself am a joke.” Why Chanel's Feminist Protest Is Great News For Gender Equality. If you haven't yet heard about Chanel's Paris Fashion Week grand finale then let us ask you something: WHERE HAVE YOU BEEN? On Tuesday, Karl Lagerfeld led a protest like no other (translation: it was jam-packed with models and held in the impressive Grand Palais). The theme?

Feminism, which is totally en trend at the moment. But in the aftermath of the feminist finale, reactions have been mixed. Emma Watson calls on men to help fight gender inequality: 'It's your issue too' - People - News - The Independent. During a speech made in New York as part of her role as UN Women Goodwill ambassador, the Harry Potter actress questioned how her objective will ever be reached if only half the population take part. Emma Watson Targeted By 4Chan Hackers Her talk came as she launched a new UN campaign called “HeForShe”, which aims to enlist the support of as many men as possible to help achieve equality between the sexes. Microsoft's Nadella sorry for women's pay comments. Twitter CEO reveals ISIS has threatened to kill him after site shut down jihadist accounts

Angelina Jolie meets the Queen at Buckingham Palace to officially receive her honorary damehood. The 39-year-old actress and star of Lara Croft: Tomb Raider had a private midday audience with the monarch todayReceived the Insignia of an Honorary Dame Grand Cross of the Most Distinguished Order of St Michael and St George The DCMG honour is in recognition of her campaigning against rape in war zones and services to UK foreign policyHer work culminated in a landmark international summit in London in June on ending sexual violence in war zones Jolie, a United Nations special envoy, was recognised for an honour in this year's birthday honours listHer husband, actor Brad Pitt, and their six children went too and met the Queen, but didn't feature in official picturesOscar-winning Jolie, who married Pitt in August, was named Hollywood's highest-paid actress by Forbes last year.

Donmar Warehouse all female Henry IV 'commendable' Be Here Nowish. Censorship and The Female Body. CUNT TODAY. MPs likely to vote to recognise Palestine as a state. The fight for Kurdistan - the Guardian briefing. What is the story? Up to 700 trapped in Syrian Kurdish town of Kobane, UN says. 10 October 2014Last updated at 08:49 ET Staffan de Mistura updated reporters in Geneva on the latest from Kobane on Friday The UN special envoy to Syria has warned that up to 700 people, mainly elderly, are still trapped in the Syrian border town of Kobane. Staffan de Mistura also urged Turkey to allow in volunteers to Syria to defend the town from Islamic State militants. There are reports that IS has taken control of the Kurdish headquarters in the town, but this has been denied by a Syrian Kurdish official there.

Syria: The story of the conflict. Image copyright Getty Images. Hope fades for Syrians one year after chemical attack. Syria declares new chemical weapons facilities. Up to 700 trapped in Syrian Kurdish town of Kobane, UN says. Isis advance further into Kobani but face strong resistance. How the battle against IS is being fought online. Yemen: Suicide blasts kill dozens in Sanaa and Hadramawt. Kobane: Air strikes 'stall IS advance' on Syrian border town. Why Syria’s disaster threatens a war in Turkey.