The Mandela Effect May Have Altered Our Reality Forever by Jairo Parra. Black Chemtrails And Why Use A Magnet.

FEMA Camp...Garden Plot Conspiracy Proof. NDAA vs P.A.N.D.A: The True Fight For Freedom. The next big example of a giant leap in the oppression of the freedom the founding fathers had established came in the winter of 1942. 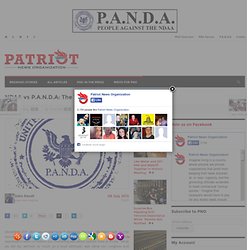 Executive Order 9066, issued by President Franklin Roosevelt, ordered the military to round up and detention of over 150,000 Asian-Americans from the Rocky Mountains to Hawaii (although the bulk of the detainees were located in California). Loyal citizens were gathered, with the help of the Census Bureau, their assets frozen, businesses left unattended and whisked away to internment camps.

These Americans were afforded no rights while the war in the Pacific raged on. Later President Carter approved reparations and President Reagan signed an official apology for the act but it was too little, too late. Systematic Silence About NDAA Proves Long Plot To Destroy America Is Real, Vindicating Conspiracy Theorists. Saman MohammadiThe Excavator January 13, 2012 “This year we are witnessing not just a series of brutal but fundamentally independent human rights violations committed by disparate governments around the globe. 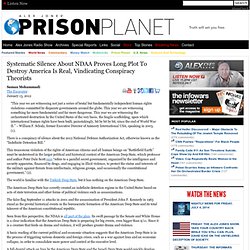 This year we are witnessing something far more fundamental and far more dangerous. This year we are witnessing the orchestrated destruction by the United States of the very basis, the fragile scaffolding, upon which international human rights have been built, painstakingly, bit by bit by bit, since the end of World War II.” – William F. Schulz, former Executive Director of Amnesty International USA, speaking in 2003. (1). There is a conspiracy of silence about the 2012 National Defense Authorization Act, otherwise known as the “Indefinite Detention Bill.” US Military Penetrates Russia's Electric Grid, New Executive Orders, Election PSYOPS.

WHY ISNT THIS ON THE NEWS?? R.F.B ep. 1. Billionaires Bet Big on Market Crash (The Reason Why Is Shocking) - The Sovereign Investor. Investment titans are making massive billion-dollar bets that the stock market is approaching an imminent crash, but perhaps most shockingly of all … is why. 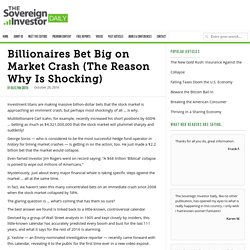 Multibillionaire Carl Icahn, for example, recently increased his short positions by 600% … betting as much as $4,321,000,000 that the stock market will plummet sharply and suddenly! George Soros — who is considered to be the most successful hedge fund operator in history for timing market crashes — is getting in on the action, too. He just made a $2.2 billion bet that the market would collapse. Even famed investor Jim Rogers went on record saying: “A $68 trillion ‘Biblical’ collapse is poised to wipe out millions of Americans.” Mysteriously, just about every major financial whale is taking specific steps against the market … all at the same time. Obama Justifies FEMA imprisonment of civilians! Obama Signs NDAA Martial Law. Bigger Brother: Total surveillance comes to UK. THIS MEANS WAR! DONALD TRUMP JUST EXPOSED MOST CORRUPT CLINTON SCANDAL OF ALL! 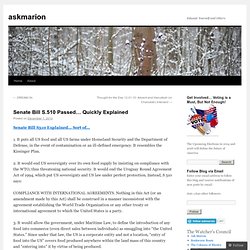 It puts all US food and all US farms under Homeland Security and the Department of Defense, in the event of contamination or an ill-defined emergency. It resembles the Kissinger Plan. 2. It would end US sovereignty over its own food supply by insisting on compliance with the WTO, thus threatening national security. COMPLIANCE WITH INTERNATIONAL AGREEMENTS. Garden plot.

How Bilderberg Will Use Technology to Rule by 2050. Aaron DykesActivist Post Are you ready, or do you have any idea what the future has in store? 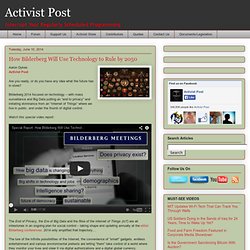 Bilderberg 2014 focused on technology – with mass surveillance and Big Data putting an “end to privacy” and initiating dominance from an “Internet of Things” where we live in public, and under the thumb of digital control. Watch this special video report: United States of Newspeak – Obama Calls Executive Orders “Presidential Memoranda” to Avoid Scrutiny and Issues Most in History. If there’s one thing we have learned about Barack Obama, it’s that he is a master of deception and absolutely loves to lie to the public. 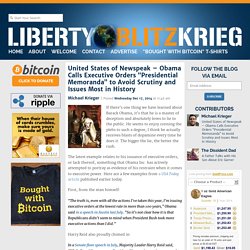 He seems to enjoy conning the plebs to such a degree, I think he actually receives blasts of dopamine every time he does it. The bigger the lie, the better the rush. The latest example relates to his issuance of executive orders, or lack thereof, something that Obama Inc. has actively attempted to portray as evidence of his restraint when it comes to executive power. Here are a few examples from a USA Today article published earlier today. Turning America into a Battlefield: A Blueprint for Locking Down the Nation.

Turning America into a Battlefield: A Blueprint for Locking Down the Nation By John W. 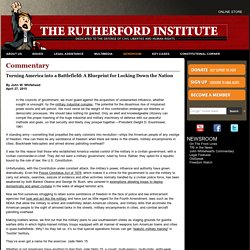 Whitehead April 27, 2015 In the councils of government, we must guard against the acquisition of unwarranted influence, whether sought or unsought, by the military industrial complex. Stats about all US cities - real estate, relocation info, house. TV Interview: OBAMA saying 'Id' better get started' in response to MARTIAL LAW and FEMA camps (2016) The Truth about MARTIAL LAW in USA! real footage; people running! testimony! (2016) Please Share.