Make. It was all a dream. Esoterica. Readings!? Post-utopia. Proteus. In Greek mythology, Proteus (/ˈproʊtiəs, -tjuːs/;[1] Greek: Πρωτεύς) is an early sea-god or god of rivers and oceanic bodies of water, one of several deities whom Homer calls the "Old Man of the Sea".[2] Some who ascribe to him a specific domain call him the god of "elusive sea change", which suggests the constantly changing nature of the sea or the liquid quality of water in general. 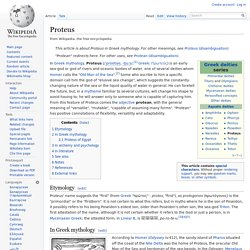 He can foretell the future, but, in a mytheme familiar to several cultures, will change his shape to avoid having to; he will answer only to someone who is capable of capturing him. Stochastic. Probability theory. As a mathematical foundation for statistics, probability theory is essential to many human activities that involve quantitative analysis of large sets of data. 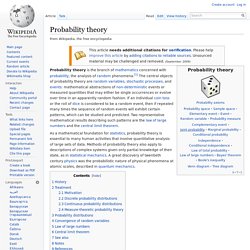 Methods of probability theory also apply to descriptions of complex systems given only partial knowledge of their state, as in statistical mechanics. U.S. dominance and Australia’s secret coup. Washington’s part in the overthrow of the Ukrainian Government would surprise few, writes John Pilger, however its secret role in toppling the Australian Government in 1975 is still not widely known. 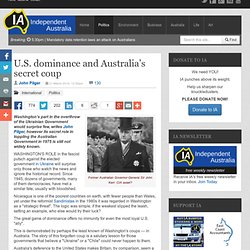 WASHINGTON'S ROLE in the fascist putsch against the elected government in Ukraine will surprise only those who watch the news and ignore the historical record. Since 1945, dozens of governments, many of them democracies, have met a similar fate, usually with bloodshed. The Hidden Australia - A secret recent History of the Whitlam Dismissal.

Whilst the only actual direct piece of evidence of CIA involvement in the 1975 Dismissal comes from Chris Boyce (of "Falcon and the Snowman" fame) who claimed during his espionage trial that the whole reason why he decided to start spying against the US was because of a misdirected CIA message he received at TRW's Black Room, which acknowledged the involvement of the CIA, there are other pointers. 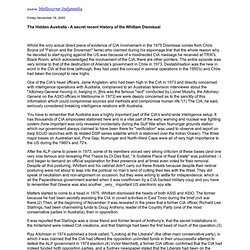 The entire episode was very similar to that of the destruction of Allende's government in Chile in 1973. Destabilisation was the new in word in the CIA at that time (although, they had used the concept in several operations in the 1950's) and Chile had taken the concept to new highs. You have to remember that Australia was a highly important part of the CIA's world-wide intelligence setup. Matters started to come to a head in 1975. The CIA in Australia, by Wakeupmag.co.uk. On December 2nd 1972, Australia's first Labor Government for twenty-three years was elected. 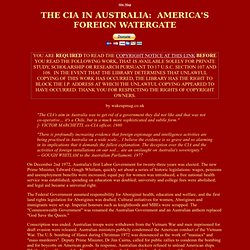 The new Prime Minister, Edward Gough Whitlam, quickly set about a series of historic legislations: wages, pensions and unemployment benefits were increased; equal pay for women was introduced; a free national health service was established; spending on education was doubled; university and college fees were abolished; and legal aid became a universal right. The Federal Government assumed responsibility for Aboriginal health, education and welfare, and the first land rights legislation for Aborigines was drafted. Cultural initiatives for women, Aborigines and immigrants were set up. Imperial honours such as knighthoods and MBEs were scrapped.

Agenda 21. Agenda 21 is a non-binding, voluntarily implemented action plan of the United Nations with regard to sustainable development.[1] It is a product of the UN Conference on Environment and Development (UNCED) held in Rio de Janeiro, Brazil, in 1992. 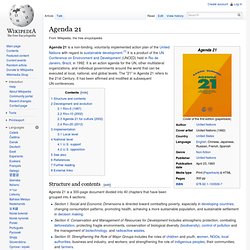 It is an action agenda for the UN, other multilateral organizations, and individual governments around the world that can be executed at local, national, and global levels. The "21" in Agenda 21 refers to the 21st Century. It has been affirmed and modified at subsequent UN conferences. Structure and contents[edit] Agenda 21 is a 300-page document divided into 40 chapters that have been grouped into 4 sections: Development and evolution[edit] The full text of Agenda 21 was made public at the UN Conference on Environment and Development (Earth Summit), held in Rio de Janeiro on June 13, 1992, where 178 governments voted to adopt the program. 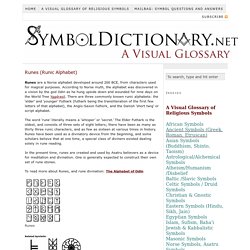 According to Norse myth, the alphabet was discovered in a vision by the god Odin as he hung upside down and wounded for nine days on the World Tree Yggdrasil. There are three commonly known runic alphabets: the ‘elder’ and ‘younger’ Futhark (futhark being the transliteration of the first few letters of that alphabet), the Anglo-Saxon futhork, and the Danish ‘short twig’ or script alphabet. The word ‘rune’ literally means a ‘whisper’ or ‘secret.’ The Elder Futhark is the oldest, and consists of three sets of eight letters; there have been as many as thirty three runic characters, and as few as sixteen at various times in history. Runes have been used as a divinatory device from the beginning, and some scholars believe that at one time, a special class of diviners existed dealing solely in rune reading. You Are Not So Smart.