A Guide to Buying Your First Laser Cutter. If there’s one tool that’s coveted by Makerspaces more than any other, it has to be the laser cutter. 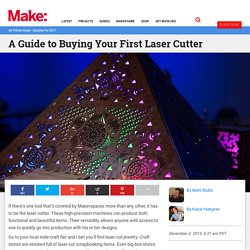 These high-precision machines can produce both functional and beautiful items. Their versatility allows anyone with access to one to quickly go into production with his or her designs. Go to your local indie craft fair and I bet you’ll find laser-cut jewelry. Craft stores are stocked full of laser-cut scrapbooking items. Salvage Neodymium Magnets from an Old Hard Drive. Scavenging parts from old, discarded electronics is a skill every maker should hone. 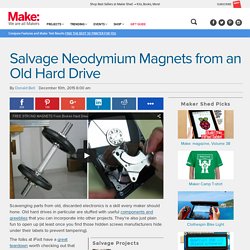 Old hard drives in particular are stuffed with useful components and greeblies that you can incorporate into other projects. They’re also just plain fun to open up (at least once you find those hidden screws manufacturers hide under their labels to prevent tampering). What to do with an 800 Lb Eucalyptus Slab. My first thought is “put a bird on it,” but Reddit user twentyfourfifty had other ideas. 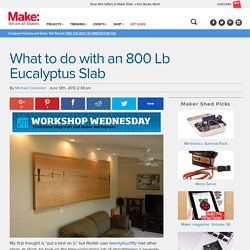 In short, he took on the time-consuming job of straightening a severely warped, but beautiful 12.5′ piece of wood, and managing cracks that had formed with handmade Dutchmen (or butterfly joints). He then sanded and polished it, and mounted it on his living room wall until such a time as he inhabits a space that can accommodate a dining room table fit for a king. Check out the slideshow with twentyfourfifty’s own comments about the build, followed by an interview where I ask him about the project in more detail. I ponder options while trying to ignore the fact that I don't have room for this anywhere in the house and can barely slide it a few inches on the garage floor. Regardless of final plans it needs to be flat. 3 Ways to Build an EMP Generator. Edit Article Edited by Nita, Mindless, Ebil Pet Rock, Burnt Out and 27 others A favorite device of science fiction and action movie writers is the EMP generator. 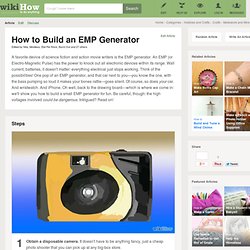 An EMP (or Electro-Magnetic Pulse) has the power to knock out all electronic devices within its range. Wall current, batteries, it doesn't matter: everything electrical just stops working. Think of the possibilities! Ad Steps 1Obtain a disposable camera. 15Fire when ready. Warnings Do not operate near medical equipment or computer equipment. Build an Adjustable Bottle Cutter for 30-Second Clean Cuts. One of the most popular videos we’ve ever shared on Make: (see below) is of Dan Rojas demonstrating how to cut a wine/beer bottle very cleanly using only a light score line and hot and cold water to stress the score and separate the glass. 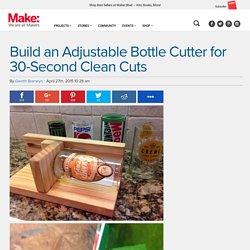 In that video, he uses a conventional glass cutting jig, which will cost you from $20-45. In the video, Dan talks about building a cutting jig in a future video, but as far as we know, that video never happened. There are a number of tutorials for building such jigs online. I like this simple adjustable one that I found on Instructables that uses only a few pieces of wood, some bolts, and the head of a glass-cutting tool that you can pick up for a few bucks. I bought some beautiful recycled drinking glasses for a family member last Christmas.

Gareth Branwyn Gareth Branwyn is a freelancer writer and the former Editorial Director of Maker Media. Learn Electronics from World’s Oldest Drum Machine. Not everyone is immediately attracted to the idea of learning electronics. 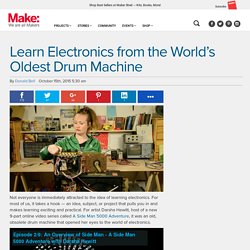 For most of us, it takes a hook — an idea, subject, or project that pulls you in and makes learning exciting and practical. For artist Darsha Hewitt, host of a new 9-part online video series called A Side Man 5000 Adventure, it was an old, obsolete drum machine that opened her eyes to the world of electronics. In the video series, Hewitt uses the inner workings of the 1959 Wurlitzer Side Man 5000 to illustrate and illuminate a range of concepts, including physics, mechanical design, and electronics. The first few episodes serve as an introduction to the machine, its intended functions, and its inner layout. Long-Distance Jammer Is Taking Down Drones. The battle for control of the skies continues. 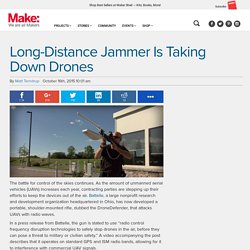 As the amount of unmanned aerial vehicles (UAVs) increases each year, contracting parties are stepping up their efforts to keep the devices out of the air. Battelle, a large nonprofit research and development organization headquartered in Ohio, has now developed a portable, shoulder-mounted rifle, dubbed the DroneDefender, that attacks UAVs with radio waves. In a press release from Battelle, the gun is stated to use “radio control frequency disruption technologies to safely stop drones in the air, before they can pose a threat to military or civilian safety.”

A video accompanying the post describes that it operates on standard GPS and ISM radio bands, allowing for it to interference with commercial UAV signals. Reportedly, the DroneDefender can hit objects up to 400 meters with an effective cone diameter of 30°. On a legal standpoint, the DroneDefender seems to be in a grey area. Watch the Life-Like Motion of a Wooden Hummingbird Automaton. Derek Hugger designs his automata the hard way.

He uses Illustrator for the initial basic forms, sketching them out on a Wacom tablet, and then uses animation software to see them in motion.