Create MindMaps and Flowcharts with Millions of Items with our Software. BiblioteQ. Download Page. Small. 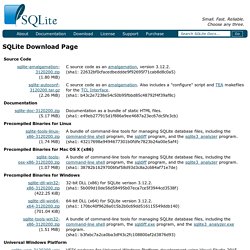 Fast. Reliable.Choose any three. Build Product Names Build products are named using one of the following templates: The story of Job Simulator – the absurdly fun VR sandbox for Oculus Rift, PlayStation VR and HTC Vive. Sometimes all virtual reality needs to do to blow your mind is put you in a well-polished sandbox and let you screw around. 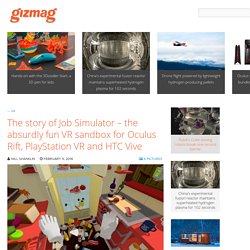 Owlchemy Labs has mastered this art, with the upcoming title Job Simulator that will launch later this year alongside the Oculus Touch controllers, HTC Vive and PlayStation VR. We sat down with CEO Alex Schwartz and CTO Devin Reimer to chat about the game's origins and striking a balance between progression and free-for-all mayhem. Job Simulator is one of the only games we've played on both the Oculus Rift and HTC Vive, and it's been among the early demo highlights of both systems. Using each platform's "hands" controllers, it lets you reach, grab, smash, throw ... well, basically imagine everything you wouldn't do in real life, and that's a pretty good starting list of what you will be able to do in Job Simulator. Owlchemy Labs' CEO Alex Schwartz (left), CTO Devin Reimer Alex Schwartz (CEO, Owlchemy Labs): [... only] the robots got it all wrong. 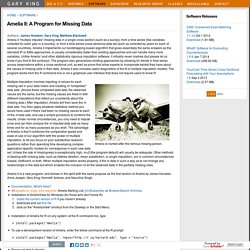 Amelia II implements our bootstrapping-based algorithm that gives essentially the same answers as the standard IP or EMis approaches, is usually considerably faster than existing approaches and can handle many more variables. Unlike Amelia I and other statistically rigorous imputation software, it virtually never crashes (but please let us know if you find to the contrary!). The program also generalizes existing approaches by allowing for trends in time series across observations within a cross-sectional unit, as well as priors that allow experts to incorporate beliefs they have about the values of missing cells in their data. Amelia II also includes useful diagnostics of the fit of multiple imputation models.

Data visualisation tools. How to Recover Deleted Data and Files From Android Phone/Tablet using free tools. The Most Painful moment when you loose some of your important data(image,pics,video,document,etc) which has been deleted from your phone by someone.Or you might deleted some data some days before but afterwards you found it useful and want it back then ? 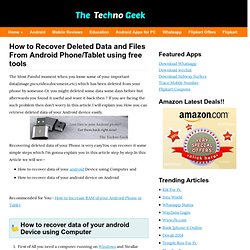 If you are facing the such problem then don't worry In this article I will explain you How you can retrieve deleted data of your Android device easily. Recovering deleted data of your Phone is very easy.You can recover it some simple steps which I'm gonna explain you in this article step by step.In this Article we will see:- How to recover data of your android Device using Computer First of All you need a computer running on Windows and Steallar Phoneix Photo recovery Software(Download from here)After downloading, Install the Recovery software and run it.Connect you SD card/Memory card to you Computer using a Card ReaderNow Click on Recover Photo,Audio and Video Button like below Screenshot. 1)ES File Explorer. Flow-Based Programming for JavaScript.

Flow-based programming. FBP is a particular form of dataflow programming based on bounded buffers, information packets with defined lifetimes, named ports, and separate definition of connections. 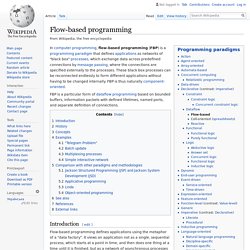 Introduction[edit] Because FBP processes can continue executing as long they have data to work on and somewhere to put their output, FBP applications generally run in less elapsed time than conventional programs, and make optimal use of all the processors on a machine, with no special programming required to achieve this.[1] The network definition is usually diagrammatic, and is converted into a connection list in some lower-level language or notation.

FBP is often a visual programming language at this level. More complex network definitions have a hierarchical structure, being built up from subnets with "sticky" connections. FBP promotes high-level, functional style of specifications that simplify reasoning about system behavior. History[edit] Extract, transform, load. In computing, extract, transform, and load (ETL) refers to a process in database usage and especially in data warehousing that: Extracts data from outside sourcesTransforms it to fit operational needs, which can include quality levelsLoads it into the end target (database, more specifically, operational data store, data mart, or data warehouse) ETL systems are commonly used to integrate data from multiple applications, typically developed and supported by different vendors or hosted on separate computer hardware. 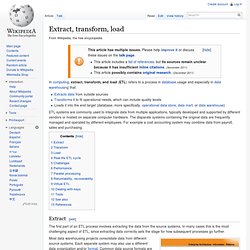 The disparate systems containing the original data are frequently managed and operated by different employees. For example a cost accounting system may combine data from payroll, sales and purchasing. Extract[edit] The first part of an ETL process involves extracting the data from the source systems.