8 tools for visualizing data with open source. Data visualization is the mechanism of taking tabular or spatial data and conveying it in a human-friendly and visual way. 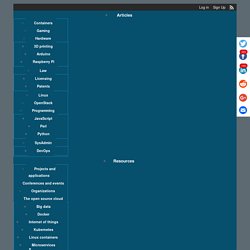 There are several open source tools that can help you create useful, informative graphs. In this post we will take a look at eight open source, data visualization tools. Datawrapper Datawrapper was created by journalism organizations from Europe, designed to make data visualization easy for news institutes. Based on a web based GUI (graphics user interface), it promises to let you create a graph in just four steps.

To create a graph, click on the "New Chart" link on the top menu bar. Image provided by Nitish Tiwari. Chart JS Chart JS is a clean charting library. Charted Created by the product science team at Medium, this is one of most minimal charting tools available online. Your First Machine Learning Project in Python Step-By-Step. Do you want to do machine learning using Python, but you’re having trouble getting started? 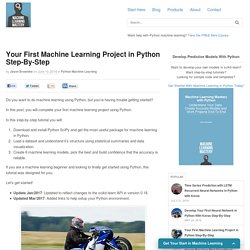 In this post, you will complete your first machine learning project using Python. In this step-by-step tutorial you will: Download and install Python SciPy and get the most useful package for machine learning in Python.Load a dataset and understand it’s structure using statistical summaries and data visualization.Create 6 machine learning models, pick the best and build confidence that the accuracy is reliable. If you are a machine learning beginner and looking to finally get started using Python, this tutorial was designed for you. 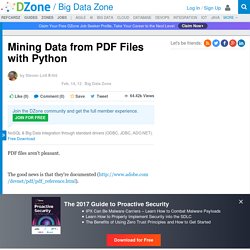 The good news is that they're documented ( The bad news is that they're rather complex. I found four Python packages for reading PDF files. I elected to work with PDFMiner for two reasons. (1) Pure Python, (2) Reasonably Complete. This is not, however, much of an endorsement. Here's one example of remarkably poor programming. # Connect the parser and document objects. parser.set_document(doc) doc.set_parser(parser) Only one of these two is needed; the other is trivially handled as part of the setter method. Also, the package seems to rely on a huge volume of isinstance type checking. Annotation Extraction While shabby, the good news is that PDFMiner seems to reliably extract the annotations on a PDF form.

In a couple of hours, I had this example of how to read a PDF document and collect the data filled into the form. This gives us a dictionary of field names and values. An important part is that we don't want much of the background text. PDFMiner. Last Modified: Mon Mar 24 12:02:47 UTC 2014 Python PDF parser and analyzer Homepage Recent Changes PDFMiner API What's It? 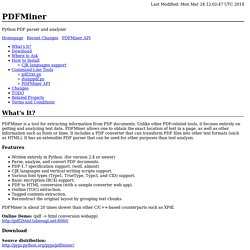 PDFMiner is a tool for extracting information from PDF documents. Unlike other PDF-related tools, it focuses entirely on getting and analyzing text data. Features Written entirely in Python. PDFMiner is about 20 times slower than other C/C++-based counterparts such as XPdf. Online Demo: (pdf -> html conversion webapp) Download Source distribution: github: Where to Ask Questions and comments: How to Install. Advanced PDF Parsing Using Python (extracting text without tables, etc): What's the Best Library? DIY Artificial Intelligence – Knowitlabs. With the recent advances in deep learning, how difficult would it be to create your own image classification system from scratch? 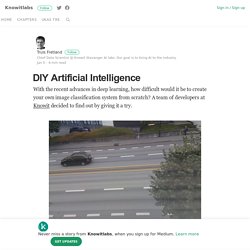 A team of developers at Knowit decided to find out by giving it a try. Is that a car on the street— yes or no? A dead simple question that probably any human capable of opening a door could answer correctly. Recognizing objects in images or identifying patterns are tasks that have traditionally been solved more easily even by young children than any computer. However, anyone using Google Image Search, Google Photos or Apple Photos lately may have noticed their improved capability of finding images that match general queries like “beach” or “forest”, even without the image being tagged or labeled in advance. So, all the major players in IT (Google, Microsoft, Facebook, Amazon, Apple) obviously know how to do image classification. How In our case, the input is an image of a street and the output is one of two classes: “car” or “no car”. Labeling the data. DIY Artificial Intelligence – Knowitlabs.

How to Make an AI (Artificial Intelligence)