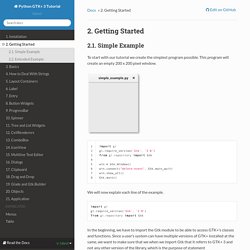 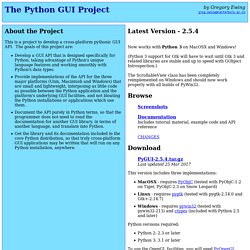 (Python 3 support for Gtk will have to wait until Gtk 3 and related libraries are stable and up to speed with GObject Introspection.) The ScrollableView class has been completely reimplemented on Windows and should now work properly with all builds of PyWin32. Browse ScreenshotsDocumentationIncludes tutorial material, example code and API referenceCHANGES Download. Common Gotchas. For the most part, Python aims to be a clean and consistent language that avoids surprises. 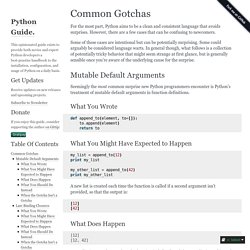 However, there are a few cases that can be confusing to newcomers. Some of these cases are intentional but can be potentially surprising. Some could arguably be considered language warts. In general though, what follows is a collection of potentially tricky behavior that might seem strange at first glance, but is generally sensible once you’re aware of the underlying cause for the surprise. Mutable Default Arguments Seemingly the most common surprise new Python programmers encounter is Python’s treatment of mutable default arguments in function definitions. 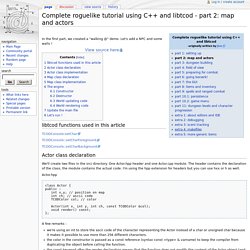 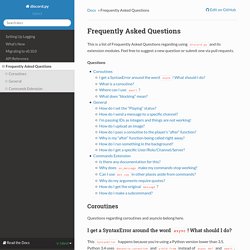 Feel free to suggest a new question or submit one via pull requests. Coroutines¶ Questions regarding coroutines and asyncio belong here. I get a SyntaxError around the word async! What should I do? Scipy Lecture Notes — Scipy lecture notes. Vinta/awesome-python: A curated list of awesome Python frameworks, libraries, software and resources. The Timeless Art of Raycasting. This week, I decided to take a little breather from my current project, GameLad, and hack on something that I've been interested in for a long time now: raycasting. 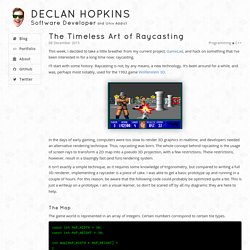 I'll start with some history. Raycasting is not, by any means, a new technology. It's been around for a while, and was, perhaps most notably, used for the 1992 game Wolfenstein 3D. In the days of early gaming, computers were too slow to render 3D graphics in realtime, and developers needed an alternative rendering technique. Thus, raycasting was born. It isn't exactly a simple technique, as it requires some knowledge of trigonometry, but compared to writing a full 3D renderer, implementing a raycaster is a piece of cake. The Map The game world is represented in an array of integers. The Player There are only a few variables needed for the player: the position, the direction, and the camera plane. Vector2D position(14.5, 20); Vector2D direction(0, -1); Vector2D cameraPlane(1, 0); The Raycasting bool hit = false; int side; while (! How to Write a Roguelike in 15 Steps. This is a rough route map for the creators of roguelikes. 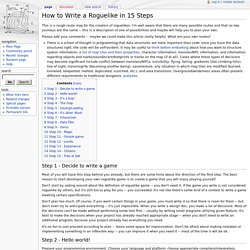 I'm well aware that there are many possible routes and that no two journeys are the same -- this is a description of one of possibilities and maybe will help you to plan your own. Please add your comments -- maybe we could make this article really helpful. What are your own routes? There is a school of thought in programming that data structures are more important than code: once you have the data structures right, the code will be self-evident. It may be useful to think before embarking about how you want to structure spatial information, a list of map tiles and their properties, character information, monster/NPC information, and information regarding objects and marks/sound/scent/footprints or tracks on the map (if at all). Step 1 - Decide to write a game Most of you will have this step behind you already, but there are some hints about the direction of the first step. External Table: How to Build a Neural Network Scoring Engine in PL/SQL.

Topic: In this post, you will find an example of how to build and deploy a basic artificial neural network scoring engine using PL/SQL for recognizing handwritten digits. 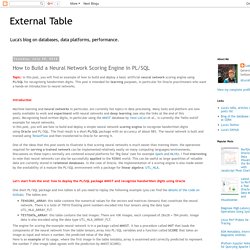 This post is intended for learning purposes, in particular for Oracle practitioners who want a hands-on introduction to neural networks. Introduction Machine learning and neural networks in particular, are currently hot topics in data processing. Many tools and platform are now easily available to work and experiment with neural networks and deep learning (see also the links at the end of this post). Recognizing hand-written digits, in particular using the MNIST database by Yann LeCun et al., is currently the "hello world" example for neural networks. One of the ideas that this post wants to illustrate is that scoring neural networks is much easier than training them: the operations required for serving a trained network can be implemented relatively easily on many computing languages/environments. The neural network. Mathesaurus. Top 10 Python Articles for the Past Month (v.July) We’ve observed nearly 1,100 articles posted about Python in July 2016 to pick the top 10 articles. 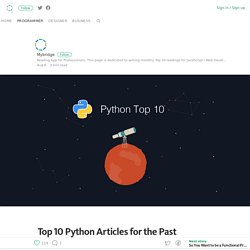 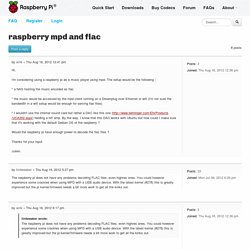 Do you find it significantly better than the Terratec Aureon ? Yes definitely. The ODAC is more detailed, has a sparkling midrange and smooth highs. But costs 5 times as much as the Terratec. wilk wrote:My music files are ripped from CD (16bit) , so I guess 24 bit doesn't add to the quality. Wrapping C/C++ for Python — Intermediate and Advanced Software Carpentry 1.0 documentation. There are a number of options if you want to wrap existing C or C++ functionality in Python. Manual wrapping¶ If you have a relatively small amount of C/C++ code to wrap, you can do it by hand. KiT/PiPy at pi/py_dev · seayjohnny/KiT.