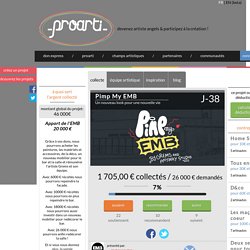 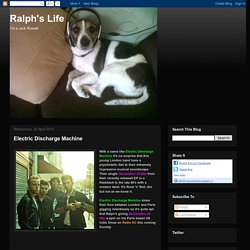 Their single Declaration Of War from their recently released EP is a flashback to the late 60's with a modern twist. It's Rock 'n' Roll Jim but not as we know it.Electric Discharge Machine share their time between London and Paris gigging relentlessly so it's quite apt that Ralph's giving Declaration Of War a spin on his Paris based UK Indie Show on Radio KC this coming Sunday.Electric Discharge Machine have played around London’s Shoreditch scene for the past year. All four previously played with other bands for a couple of years but when they got together for a gig last year felt that they had a common goal. J'aime la Douleur - Lady Marble. ▶ YOU BROKE THE LAW by Temple Velocity. 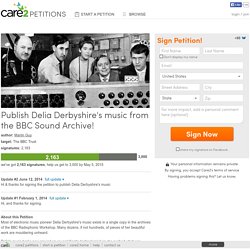 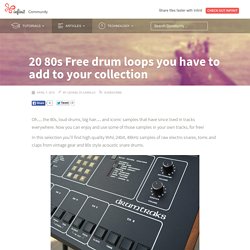 Now you can enjoy and use some of those samples in your own tracks, for free! In this selection you’ll find high quality WAV, 24bit, 48kHz samples of raw electro snares, toms and claps from vintage gear and 80s style acoustic snare drums. Image credit: Samples from Mars Check out the list below to hear and download those samples that are of your interest. A 15 ans, c'est la Reine de la guitare électrique. TakeMoneyRun & DJ Wax On – Funk Rock. The song that thought it was never to be sung. The song that thought it was never to be sung this song thought it self that it was never ever going to be played or sung. that was a certainty for it. but then, as it gets aware, meanwhile it’s being singed in front of an audience for the first time, that it’s actually being played, omg, the song moans: is for real, you are singing me for real? 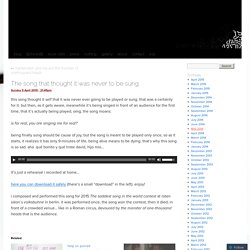 Being finally sung should be cause of joy, but the song is meant to be played only once, so as it starts, it realizes it has only 9 minutes of life, being alive means to be dying. that’s why this song is so sad. ahá. qué bonito y qué triste david, hijo mío… Ricco Label : Discography - in my Time : Takahiro Kido / english. Lithuanian Programmer 3D Prints Robotic Tank Replica from Sci-Fi Movie ‘Ghost in the Shell’ Paulius Liekis While 3D printing is a futuristic technology that’s mind-blowing all on its own, just as it stands today, it is fueled by a community that is inspired and moving at rapid speed on a daily basis. 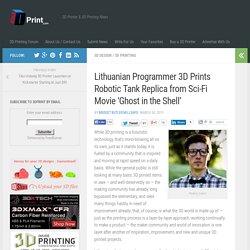 While the general public is still looking at many basic 3D printed items in awe — and well-deservedly so — the making community has already long bypassed the elementary, and sees many things hastily in need of improvement already; that, of course, is what the 3D world is made up of — just as the printing process is a layer-by-layer approach, working continually to make a product — the maker community and world of innovation is one layer after another of inspiration, improvement, and new and unique 3D printed projects.

Lithuanian designer and programmer Paulius Liekis is one such 3D printing enthusiast who is a fan of robotics and hexapods, but he has plenty of inspiration, energy, and passion leading the way to new ideas. time. Fela Kuti. Deeper Than Daft Punk: A Love Letter to the French Touch — Cuepoint. The Buffalo Bunch Among all the acts here, The Buffalo Bunch — sometimes known as We In Music — are probably the least known, with no hit singles to their name, and no album releases. 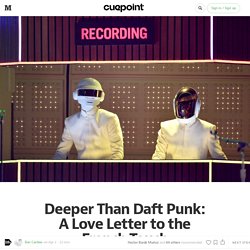 What’s more, their crudely funky production style — all chopped disco samples, infuriating vocal loops and wandering bass lines — probably won’t endear them to fans of St Germain-style jazzy house or I:Cube’s deep tech. And yet the Buffalo Bunch are among the most fun of all the French Touch acts, their music eminently danceable and their remixes plucked from the very top shelf, transforming the likes of Phoenix and Bebel Gilberto into unlikely dance floor beasts. Bracelet - The Future is Now. (A) These general website terms and conditions of use (hereinafter referred to as the “General Terms and Conditions”) set forth the terms and conditions applicable to the website (hereinafter referred to as the “Site”). 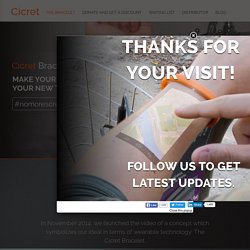 (B) The Site is the exclusive property of CN2P (hereinafter referred to as the “Company”). (C) The purpose of the Site is to present the project developed by the Company (the “Project”) and to enable the collection of donations through the Site in order to finance the completion of the Company’s Project (the “Donations”). 2.1 Definitions For the purposes hereof, capitalized terms shall have the meaning given thereto below, unless the context requires otherwise: “Company” means CN2P, a société par actions simplifiée incorporated under the laws of France, whose registered office is La Grande Arche Paroi Nord 92044 Paris La Défense, registered under number RCS Nanterre B 808 557 573; “Party” means the Company and any Donor that has accepted the General Terms and Conditions;

Now You Can Download Pixar’s Rendering Software For Free. RenderMan, Pixar’s fabled software that can simulate extremely realistic lighting on 3-D objects, is now free to download for non-commercial use on Mac, Windows, and Linux. 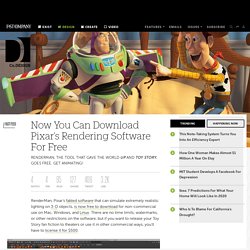 There are no time limits, watermarks, or other restrictions on the software, but if you want to release your Toy Story fan fiction to theaters or use it in other commercial ways, you'll have to license it for $500. True Hold Records. Gaelle Buswel - Secret Door. Deep Undercover by Steve Thompson Incidents. DianaJ Music, Lyrics, Songs, and Videos. YouTube : un clip musical à 360° Précédemment, nous avons évoqué un clip intégralement filmé avec un iPhone 6 Plus et un autre tourné avec un drone. 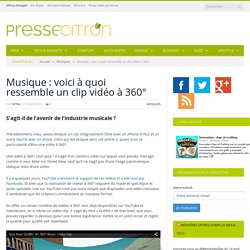 This guest post is written by Jo-Ná A. Williams, Esq., a former vocalist and songwriter and a solo practitioner with her own firm in New York, J.A. Williams Law – The Artist Empowerment Firm. Due to collapsing album sales, piracy, and less money generated from digital downloads, artists are now faced with the question, “How do I make money with my music?” Well, if the sales aren’t cutting it and the only people at your shows are your family and a few high-school classmates, how will you really make a living with your art? Show me the money!! I’m sure you know licensing and live shows are great money generators for musicians, but what are some less common ways that artists are making money in the music industry today?

Hold live online showsCreate an online streaming concert and charge your fans and followers to watch your live performance from the comfort of their home. Des tablettes à l’école ? Soviet Animations of Ray Bradbury Stories: 'Here There Be Tygers' & 'There Will Comes Soft Rain' Sergei Bondarchuk directed an 8-hour film adaptation of War and Peace (1966-67), which ended up winning an Oscar for Best Foreign Picture. When he was in Los Angeles as a guest of honor at a party, Hollywood royalty like John Wayne, John Ford, Billy Wilder lined up to meet the Russian filmmaker. But the only person that Bondarchuk was truly excited to meet was Ray Bradbury. Bondarchuk introduced the author to the crowd of bemused A-listers as “your greatest genius, your greatest writer!” Ray Bradbury spent a lifetime crafting stories about robots, Martians, space travel and nuclear doom and, in the process, turned the formerly disreputable genre of Sci-Fi/Fantasy into something respectable.

He influenced legions of writers and filmmakers on both sides of the Atlantic from Stephen King to Neil Gaiman to Francois Truffaut, who adapted his most famous novel, Fahrenheit 451, into a movie. That film wasn’t the only adaptation of Bradbury’s work, of course. Techtonic Plates. Release - Stoke's profile. Cartographer - Ascension (Acoustic) by cartographerband. Zoe Priceless's profile. SoundCloud. Casual As feat. Gard Feez, Ciaran Mac, O'B \u0026 Cauld Cauldron(Prod. Sound Thief) by Sound Thief. Red Van by BurningAstronomers. SuperFan Page for Millie Manders. Romeda Records. Limited edition Owlbinos of Northfield Floppy Disk containing ultra low fidelity 8bit 1000hz WAV versions of the Cinnamon Fog Single/EP.Fitting with the Owlbinos ethos of embracing & using obsolete technology, these versions offer a completely new listening experience due to the file compression & degradation of frequencies necessary to fit the tracks on a 1.44MB Floppy Disk.

Hip-hip veterans De La Soul have just announced their upcoming album -- but there's no title, no release date, and most notably, no label. Yes, De La is relying on the support of fans via Kickstarter to release their ninth full-length project, and they've recruited music notables like Damon Albarn, David Byrne, 2 Chainz and Little Dragon to contribute, with more special guests to be announced. "I had a few reservations about it [Kickstarter]," Kelvin "Pos" Mercer of De La Soul told Billboard.

But the group was wary of being beholden to a label, "who would want us to merge ourselves [artistically] with what was going on now, in the way that they saw fit. " Broken Pen \u0026 emperor bohe - Half Life (feat. Detective Tuesday) by emperor bohe. Nils Frahm Releases Free Album Solo. Nils Frahm: "Wall" (via SoundCloud) Berlin-based composer Nils Frahm has declared it Piano Day, a new annual celebration of the instrument that takes place on the 88th day of any year. (Instrument fact: a piano has 88 keys!) "Piano Day is intended to be the most joyful of all holidays," he writes. To celebrate, he's released an album called Solo via Erased Tapes. Download it for free here and listen to "Wall" above.

Icicle.band's profile. FREQUENCY by Monosapiens & Conscious Route ft SoundBone. Romeda Records. Club cheval Will Take You "From The Basement To The Roof" Club cheval (the second "c" is lower case) is the Paris-based supergroup of French producers Canblaster, Myd, Sam Tiba, and Panteros666. Their name translates roughly to "club horse," and their latest single, "From The Basement To the Roof," sets them squarely in a lineage of club musicians from that country known for their angular but emotionally impactful work.

With an assist from Los Angeles vocalist Phlo Finster, it's a crisp house jam that could work after-hours at the club or after-after-hours back at the crib. "The use of Phlo's voice gave the track the mellow and sentimental touch we were looking for," Club cheval told The FADER via email. The band seems to be keeping pretty mum on any details for now, but we do know that "From The Basement To The Roof" is the first single from their forthcoming debut album, and we can expect that to drop this year. Aube L - We Never Walk Alone (LIVE VERSION ALONE WITH A JamMan SOLO) Home - The Velocetas. Signup. Craneón. ViciSolum Records. The Lay of a Coming Stormvideo Includes unlimited streaming via the free Bandcamp app, plus high-quality download in MP3, FLAC and more.The exclusive single "Nadir" will follow as a bonus track! Emetteur (Free Single) Emetteur (Free Single)