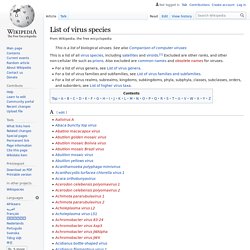 See also Comparison of computer viruses. In China two people got the plague. Why is it still a thing? The two recent patients, from the Chinese province of Inner Mongolia, were diagnosed with pneumonic plague by doctors in the Chinese capital Beijing, according to state media Xinhua. 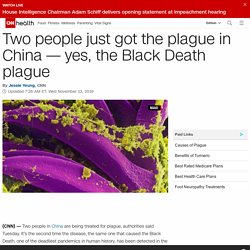 They are now receiving treatment in Beijing's Chaoyang District, and authorities have implemented preventative control measures. Plague, caused by bacteria and transmitted through flea bites and infected animals, can develop in three different forms. Bubonic plague causes swollen lymph nodes, while septicemic plague infects the blood and pneumonic plague infects the lungs. Pneumonic -- the kind the Chinese patients have -- is more virulent and damaging. Left untreated, it is always fatal, according to the World Health Organization (WHO). During the Middle Ages, plague outbreaks devastated Europe, killing around 50 million people. Drug-resistant microbes kill about 35,000 people in the U.S. per year. New Swine Flu Virus Could Infect People. VBD-AIR: Website Tracks Mosquito-Borne Diseases Spread Globally By Air Travel.

The emergence of international air travel in the 20th century enabled an unprecedented spread of ideas, cultures and communication. 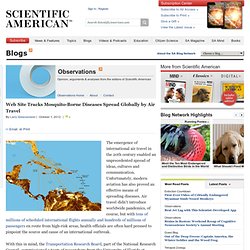 Unfortunately, modern aviation has also proved an effective means of spreading diseases. UK Man Diagnosed with “Congo Fever” Dies. Picture: CDC (PD) A 38-year old British man who was diagnosed with Crimean-Congo Viral Hemorrhagic Fever, commonly referred to as Congo Fever, has died after being transported to the Gartnavel General Hospital in Glasgow. 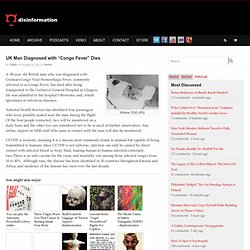 He was admitted to the hospital’s Brownlee unit, which specializes in infectious diseases, National Health Services has identified four passengers who were possibly seated near the man during the flight. Of the four people contacted, two will be monitored on a daily basis and the other two are considered not to be in need of further observation.

Drug-Resistant Gonorrhea: Is The Antibiotic Era Coming To An End? It really is as scary as it sounds. 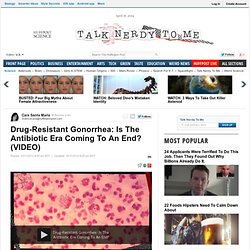 Gonorrhea is the newest superbug. Could it become the next AIDS? Updates: New York City's Displaced Rat Population Simply Cannot Wait to Give You the Bubonic Plague. Before I moved to NYC, I was embarrassingly afraid of rats. 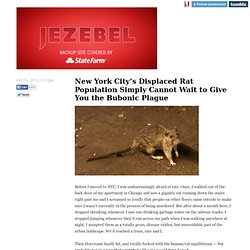 Once, I walked out of the back door of my apartment in Chicago and saw a gigantic rat running down the stairs right past me and I screamed so loudly that people on other floors came outside to make sure I wasn’t currently in the process of being murdered. But after about a month here, I stopped shrieking whenever I saw one drinking garbage water on the subway tracks. I stopped jumping whenever they’d run across my path when I was walking anywhere at night. Ebola may go airborne. Superspreaders of disease: SARS and other pandemics are spread by modern-day Typhoid Marys. Photo by J.P. 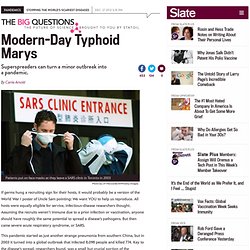 Moczulski/AFP/Getty Images. If germs hung a recruiting sign for their hosts, it would probably be a version of the World War I poster of Uncle Sam pointing: We want YOU to help us reproduce. All hosts were equally eligible for service, infectious-disease researchers thought. Assuming the recruits weren’t immune due to a prior infection or vaccination, anyone should have roughly the same potential to spread a disease’s pathogens. But then came severe acute respiratory syndrome, or SARS. Pandemics books, authors, and tweets: The best stories about the worst diseases. Udo Weber/iStockphoto. 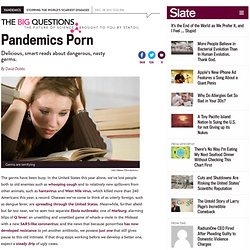 The germs have been busy. In the United States this year alone, we’ve lost people both to old enemies such as whooping cough and to relatively new spillovers from other animals, such as hantavirus and West Nile virus, which killed more than 240 Americans this year, a record. Diseases we've come to think of as utterly foreign, such as dengue fever, are spreading through the United States.

Meanwhile, further afield but far too near, we’ve seen two separate Ebola outbreaks; one of Marburg; alarming blips of Q fever; an unsettling and unsettled game of whack-a-mole in the Mideast with a new SARS-like coronavirus; and the news that because gonorrhea has now developed resistance to yet another antibiotic, we possess just one that still gives pause to this old intimate. United States. Compared with rodents, bat species carry more viruses.

A bat species may be more likely than a rodent to carry viruses known to jump from other animals to people, a new study suggests. 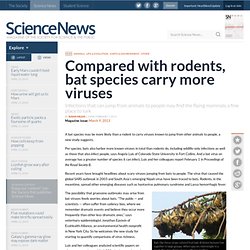 Pig Manure Reveals More Reason To Worry About Antibiotics : The Salt. Hide captionPigs at a farm in Beijing peer out at visitors. 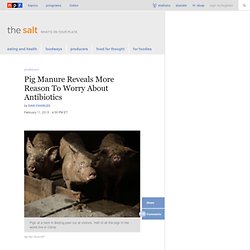 Half of all the pigs in the world live in China. Ng Han Guan/AP Pigs at a farm in Beijing peer out at visitors. Is This a Pandemic Being Born? - By Laurie Garrett. Here's how it would happen. Children playing along an urban river bank would spot hundreds of grotesque, bloated pig carcasses bobbing downstream. Hundreds of miles away, angry citizens would protest the rising stench from piles of dead ducks and swans, their rotting bodies collecting by the thousands along river banks. China Bird Flu: Beijing Reports First Suspected Case Of New Strain. In this Sunday March 10, 2013 photo, soldiers dressed as ushers guard front row seats on the second floor of the main hall of the Great Hall of the People, while a live video image of Xi Jinping, the Chinese Communist Party's General Secretary and the nation's incoming-President, is shown on a screen during a plenary session of the National People's Congress, in Beijing, China.

(AP Photo/Alexander F. Yuan)In this Sunday, March 10, 2013 photo, delegates from the Chinese People's Liberation Army march in formation into the Great Hall of the People to attend a plenary session of the National People's Congress, in Beijing, China. New flu in China reveals its avian origins. A new type of bird flu that has killed 11 people in China combines genes from three existing influenza viruses, scientists report April 11 in the New England Journal of Medicine.

Since Chinese officials confirmed March 29 that three people had contracted H7N9 avian influenza, the virus has sickened 43 people. Of those still alive, many have severe illness, while others developed only mild symptoms. So far, the virus does not seem to spread from person to person, but health officials are closely watching more than 1,000 people who have been in contact with sick people for signs of illness.

The virus is a relative of ones found in birds, and some of the sick people had contact with poultry. But so far, health officials haven’t found the source of the infections. The Big One? - By Laurie Garrett. We are at a mysterious fork in the road. One path leads to years, perhaps decades, of spread of a new type of influenza, occasionally making people sick and killing about 18 percent of them. It's not a pleasant route, strewn as it is with uncertainties, but no terror seems to lurk on its horizon.

The other path, however, wrenches the gut with fear, as it brings worldwide transmission of a dangerous new form of flu that could spread unchecked throughout humanity, testing global solidarity, vaccine production, hospital systems and humanity's most basic family and community instincts. Closing hospital windows 'increases infection risk' 25 April 2013Last updated at 21:03 ET By Neil Bowdler Health and science reporter, BBC News A disused NHS ward in Bradford was used in the study to model air flows Keeping the windows open on traditional NHS wards can dramatically reduce the risk of infection, say researchers.

Imagining the Post-Antibiotics Future. Medical procedures may involve a high risk of infections, but our everyday lives are pretty risky too. How Vaccine Fears Fueled The Resurgence Of Preventable Diseases : Shots - Health News. New evidence shows the Black Death had to have been airborne — and not caused by rat fleas. Interview: Martin Blaser, Author Of 'Missing Microbes' CDC Threat Report: ‘We Will Soon Be in a Post-Antibiotic Era’ Antimicrobial Resistance. Remains of 'End of the World' Epidemic Found in Ancient Egypt.

New research finds that cell phones reflect our personal microbiome. This Is How The Ebola Epidemic Might Spread If It's Not Contained. Ebola - MoBS. Airplane sewage may be helping antibiotic-resistant microbes spread. Hunting the Nightmare Bacteria. Ebola Deaths Top 4,000; Screening Begins At New York's JFK Airport. Firestone Did What Governments Have Not: Stopped Ebola In Its Tracks : Goats and Soda. On gloves, rubber and the spatio-temporal logics of global health. The Black Death bacteria continues to kill. Bacterial DNA from the Black Death found in teeth. Research to prevent future pandemics. Scientists can now discover global epidemics before they start. Antibiotic under threat, as new superbug emerges in China. Escherichia coli O26 Infections Linked to Chipotle Mexican Grill Restaurants. First U.S. Case Of Sexually Transmitted Zika Confirmed In Texas.

How we discovered infectious diseases in 2,000-year-old faeces from the Silk Road. DNA confirms cause of 1665 London's Great Plague. Theconversation. The Black Plague Came To Norway In The Creepiest Way Possible. MAP: Find Out What New Viruses Are Emerging In Your Backyard : Goats and Soda. A Brain-Invading Parasite Is Believed to Be Spreading Because of Climate Change. Brain-Infecting 'Rat Lungworm' Spreads in Florida. The Illuminating Geometry of Viruses. Deadly plague epidemic rages in Madagascar. Will H7N9 Flu Go Pandemic? There's Good News and Bad News. Salon. Beware 'Disease X': the mystery killer keeping scientists awake at night. Bill Gates revealed a scary simulation that shows how a deadly flu could kill more than 30 million people within 6 months.

A mysterious ‘polio-like illness’ has spread to 22 US states — leaving children paralyzed. An ancient strain of plague may have led to the decline of Neolithic Europeans. Mom Posts ‘Angry As Hell’ Rant After Her 15-Day-Old Son Gets Exposed To Measles Due To Anti-Vaxxers. Typhus and Tuberculosis Are Spreading in Homeless Populations. Pig 'ebola' virus sends shock waves through global food chain. The looming threat of C-diff. Furry, cute and drooling herpes: what to do with Florida's invasive monkeys? Novel human virus? Pneumonia cases linked to seafood market in China stir concern. Basic reproduction number. How to stop a zombie apocalypse – with science. How do bats live with so many viruses? - Attention to the Unseen. Gunnison, Colorado: the town that dodged the 1918 Spanish flu pandemic.

Legionnaire's Disease pathogen found in water at some schools reopening after Covid-19 lockdowns. How Did Previous Pandemics Come to an End?