This Average Guy Has Slept With More Celebrities Than Taylor Swift. Taylor Swift And Zayn Drop New Video For 50 Shades Sequel. Pop’s queen WASP and brooding ex-Directioner join forces in ‘sexy’ video you could watch with your mom. 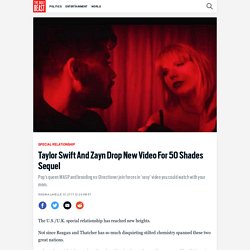 The U.S. /U.K. special relationship has reached new heights. Not since Reagan and Thatcher has so much disquieting stilted chemistry spanned these two great nations. Released at midnight on Thursday, the video for the Taylor Swift & Zayn Malik collaboration I Wanna Live Forever (Fifty Shades Darker) sees the established American social media magnate and the more recently-ennobled British darling join forces against a volley of red strobes and paparazzi flashguns. The track is from the Fifty Shades Darker soundtrack which will be released to coincide with the arrival of the movie in cinemas on February 10, just in time for Valentine’s Day. Fifty Shades Darker, the sequel to Fifty Shades of Grey is the latest in the franchise which has advanced the cause of Pornhub’s BDSM content and out-of-town DIY store sales of rope. 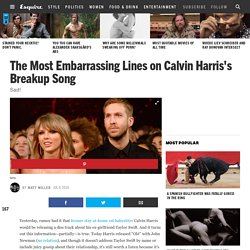 And it turns out this information—partially—is true. Today Harris released "Olé" with John Newman (no relation), and though it doesn't address Taylor Swift by name or include juicy gossip about their relationship, it's still worth a listen because it's filled with a ton of embarrassing lines that sound like they were copy and pasted from an eighth grader's Tumblr. Here's a sampling: Advertisement - Continue Reading Below "I feel so good when I leave your apartment.

" "I kiss you once, then I stare at the ceiling. " "I see online that you've begun to be a good girl and take trips with your boyfriend, being attentive, continue to pretend. " Watch Taylor Swift Cover Drake, Future's 'Jumpman' Drake & Future's hypnotic flow on "Jumpman" proves dangerous for Taylor Swift in a new ad for Apple Music. 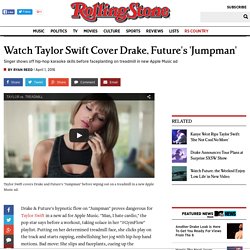 "Man, I hate cardio," the pop star says before a workout, taking solace in her "#GymFlow" playlist. Putting on her determined treadmill face, she clicks play on the track and starts rapping, embellishing her jog with hip-hop hand motions. Bad move: She slips and faceplants, cueing up the company's slogan: "Distractingly good. All the music you want. " The singer wrote on Twitter that the ad was "based on true events. " Camille Paglia Takes on Taylor Swift, Hollywood's #GirlSquad Culture. This story first appeared in the 2015 Women in Entertainment issue of The Hollywood Reporter magazine. 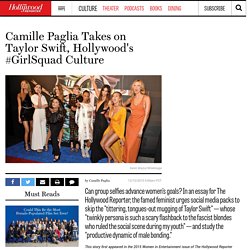 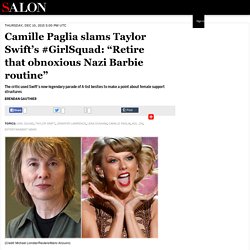 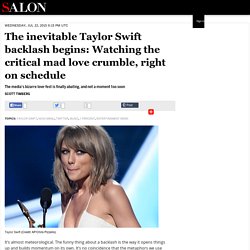 The funny thing about a backlash is the way it opens things up and builds momentum on its own. It’s no coincidence that the metaphors we use for a backlash tend to be come from climactic phenomenon — an opening of the floodgates, a turning of the tide, when it rains it pours. A backlash, though made by human beings, can feel like a part of the natural world and its inexorable forces. And that seems to be what’s happening right now with Taylor Swift. And while there are good things to say about Swift — her pushing back against streaming services that shaft musicians, for instance — this tide-turning comes not a moment too soon. Despite this weird worship of wealth and power that’s grown up in post-Great Recession America — which has helped Swift immensely — not everyone loves Swift or her oddly lifeless, machine-made music.

And the press and media — which has bowed to Swift’s every move — may be just getting started in this new direction. 10 questions Taylor Swift could have asked herself before picking a fight with Nicki Minaj. Yesterday, MTV announced the Video Music Award nominees. 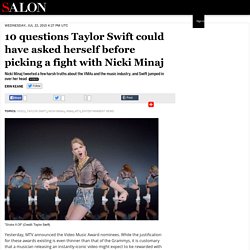 While the justification for these awards existing is even thinner than that of the Grammys, it is customary that a musician releasing an instantly-iconic video might expect to be rewarded with at least a nod or two for a Moon Man statuette, with the hopes of being licked on the face by Miley Cyrus if she should win. Such was Nicki Minaj’s understandable disappointment when “Anaconda,” her manic feminist genius send-up of Sir Mix-a-Lot’s “Baby Got Back” and also by the way every misogynistic video trope under the sun, did pick up three nominations, but not for the highest honor, Video of the Year. Minaj, never one to mince words, tweeted a shot at the system: If your video celebrates women with very slim bodies, you will be nominated for vid of the year 😊😊😊😊😊😊😊😊😊😊😊😊😊— NICKI MINAJ (@NICKIMINAJ) July 21, 2015 @NICKIMINAJ I've done nothing but love & support you.

Huffingtonpost. Taylor Swift is not an “underdog”: The real story about her 1 percent upbringing that the New York Times won’t tell you. Watch Taylor Swift and Jimmy Fallon's Jumbotron Dance-Off! Taylor Swift is showing off those signature dance moves! 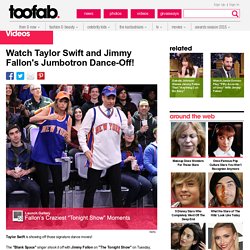 The "Blank Space" singer shook it off with Jimmy Fallon on "The Tonight Show" ﻿on Tuesday, grooving with the late night host on the jumbotron. The comedian introduced the hilarious segment after having an emotional moment. "Every time I see you dancing at events I get a little sad," Fallon told Swift. "For a while there, that was our thing. " "That was a long time ago," she replied. "We were famous jumbotron dancers," he continued, before explaining that he'd been in touch with a lot of New York City arenas to collect dance cam footage. Earlier in the episode, Fallon showed the blonde beauty's Vogue cover with Karlie Kloss and asked her to recreate a video the BFFs made for Vogue.com. "There's like a best friend test, where you guys get two blank pieces of paper and you draw each other. Watch the video below to see them put their drawing skills to the test (they should probably stick to dancing!)

Taylor Swift and Katy Perry Hate Each Other (A Theory and Timeline) Katy Perry Allegedly Vows to RUIN Taylor Swift with Super Bowl Jab. Taylor Swift Explains Why She Carries Cat Olivia Benson Around New York City! Elder Ordonez/INFphoto.com Most people don't take their cats out for a walk. 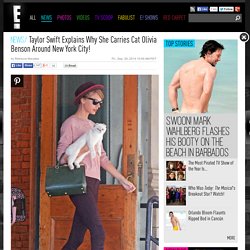 Then again, most people aren't Taylor Swift, nor do they have cats like Olivia Benson! The 24-year-old "Shake It Off" singer has been spotted toting her adorable Scottish Fold kitten like a stylish sidekick through New York City—but there's a perfectly logical explanation for why! "The kitten freaks out about being put in the cat carrier," Swift, 24, recently told Access Hollywood. "So I was just like, 'OK, all right, we're gonna just do this! '" Hooks Up Pro Snowboarder Greg Bretz ... It's Your Lucky Day, Dude!! It's Your Lucky Day, Dude!! 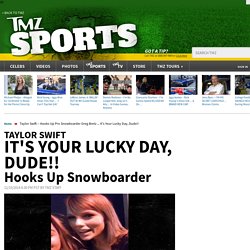 Hooks Up Snowboarder Taylor Swift just gave a pro snowboarder a heart attack we're guessing ... 'cause all Greg Bretz wanted for his birthday was for Taylor to show him some love -- and it just happened. T Swizzle recorded a shout out to Greg -- posted by a mutual friend of theirs -- telling him, "Happy birthday, Greg. Amazing! " 'South Park' Goes There With Bill Cosby & Taylor Swift Duet. Too soon? On Tuesday, the new "South Park" promo was released saying Bill Cosby would be featured with Taylor Swift on the show's holiday special, and everyone let out an uncomfortable but anticipatory, "Uh oh.

" Well, here's the full clip that aired during the show's "Washington Redskins Go F**k Yourself Holiday Special" on Wednesday. In it, Cosby hands Swift a glass of wine as they sit on the couch to sing an alternate version of the classic duet, "Baby It's Cold Outside. " Before you get upset, this is "South Park" after all.

Once again, they have given us one of those funny moments where you immediately regret laughing. Taylor Swift: Who’d want to date me? Does Taylor Swift hate Katy Perry? Uninformed Buffoon Barely Comprehends Conversation About Taylor Swift. PHILADELPHIA—According to sources, local dullard Peter Merriam, 34, struggled pitifully Saturday evening to keep up with a simple conversation regarding popular international singing sensation Taylor Swift. "I was aghast at his ignorance of even the most basic works of her oeuvre," said partygoer Amy Singer, who remarked that the incurious Merriam "didn't know or appear to care" about Swift's childhood in small-town Pennsylvania or that she's the youngest person ever to win Entertainer of the Year at the CMAs. "He flailed around like some kind of caveman for something to say about the Kanye West incident, and then tried to steer the conversation toward the health care debate.

I would have pitied the man were he not so unapologetically obtuse. " Sources reported that the unlearned Merriam almost redeemed his intellectual credentials by knowing the name of one of the contestants on Top Chef. Same Americans Who Made Taylor Swift Popular Polled On Constitutionality Of Health Care Reform. You Can't Escape Taylor Swift's Face. Taylor Swift is already dominating the charts, but now she's dominating the covers too. Time, Bloomberg Businessweek and Wonderland all jumped on the T.Swift train this week. Taylor Swift Crashes Young Fan's Photo Shoot While Jogging (In Full Makeup) Taylor Swift is the kind of superstar who surprises fans at their bridal showers, writes encouraging messages on their Instagram photos, gives them money to purchase Chipotle on their birthdays and invites them into her home to eat homemade cookies and listen to her latest album (before everyone else).

And in her latest attempt to become St. Taylor -- or at least the friendliest celebrity out there -- Swift crashed a young fan's photo shoot while she was jogging in a Nashville area park. Swift was just working on her fitness in the great outdoors when she jogged her way into a fan, who was in the middle of a photo shoot with photographer Sarah Bailey. The 24-year-old stopped and took the time not only to chat with the girl, but to pose for a couple of photos. And luckily, she was camera-ready: Swift sported a Notre Dame hoodie -- her younger brother Austin's school-- and a full face of makeup. Welcome to New York. Taylor Swift Explaining New York Vocabulary Is Beyond Cringeworthy. Taylor Swift performs at the iHeartRadio Music Festival at the MGM Grand Garden Arena on September 19, 2014 in Las Vegas, Nevada. (Photo by Al Powers/Powers Imagery/Invision/AP) Taylor Swift arrives at the iHeartRadio Music Festival, Friday, Sept. 19, 2014, at The MGM Grand Garden Arena in Las Vegas.

(Photo by Denise Truscello/WireImage) Taylor Swift attends the world premiere of "The Giver" at the Ziegfeld Theatre on Monday, Aug. 11, 2014, in New York. (Photo by Evan Agostini/Invision/AP) Taylor Swift arrives at the Teen Choice Awards at the Shrine Auditorium on Sunday, Aug. 10, 2014, in Los Angeles. Taylor Swift Criticized For Singing 'Too White' Amid rumors of yet another tempestuous breakup, country-pop superstar Taylor Swift is facing a different kind of drama: a legion of blogger fans insisting that Swift sings “too white.” The firestorm began, of course, when Swift was booed at the Soul Train Music Awards last March. Protestors of the event claimed she was a “sellout to the white establishment” and called for her replacement by Prince. Taylor Swift - Shake It Off. Taylor Swift + Pizza = Synergy? Ordering Red From Our Local Papa John's.

By Jaime Lees When I found out that Taylor Swift's new album, Red, would be available via Papa John's Pizza delivery, I pretty much had the same thoughts I had upon hearing the first single off of Red: The fuck? An Exclusive First Look At Some of Taylor Swift's Trashed Fan Mail. Of the many things that Taylor Swift is known for, her extremely dedicated fan-base has to be the most notorious (Haha it's totally not, and you know what is, but let's just go with it).

Swift lost Best Country Album to newcomer Kacey Musgraves, and for the record, this is Swift's "losing face": And when she was genuinely surprised because she thought she won Album of The Year, but didn't: Taylor Swift Says She Talked With The Ex-Boyfriend Who Inspired 'Red' Victoria's Secret Fashion Show 2013 Stars Taylor Swift Giving The Angels Competition (PHOTOS) Taylor Swift Now Dating Senator Joseph McCarthy.