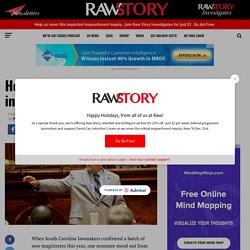 The former state House member had made a name for himself in Columbia as a staunch defender of the Confederate flag, and on Facebook he has penned anti-immigration screeds and used racially charged language. In May, for example, he posted a photo of New Jersey Sen. Cory Booker, an African American Democrat running for president.

Pregnant woman indicted for manslaughter after she is shot in the stomach by another woman. According to the news outlet, 27-year-old Alabama resident Marshae Jones was taken into custody after a Jefferson County grand jury indicted her on manslaughter charges. 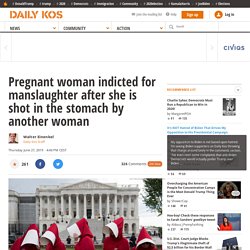 The charges stemmed from an incident between Jones and another woman, 23-year-old Ebony Jemison, in December of 2018. According to reports, the two women got into a fight that ended with Jemison reportedly shooting Jones. The Movement To Skip The Electoral College Is Picking Up Steam. UPDATE (May 30, 2019, 2:38 p.m.): Democratic Gov. 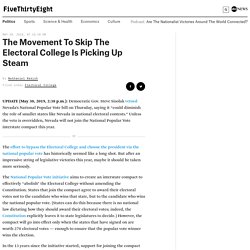 Steve Sisolak vetoed Nevada’s National Popular Vote bill on Thursday, saying it “could diminish the role of smaller states like Nevada in national electoral contests.” Unless the veto is overridden, Nevada will not join the National Popular Vote interstate compact this year. The effort to bypass the Electoral College and choose the president via the national popular vote has historically seemed like a long shot. In Austin, the air smells of tacos and trees — and city-state conflict. Man Slapped with Citation for Eating Pizza at Bus Stop in San Francisco: Report. Illinois Won't Let This Pastafarian Keep Her Amazing Driver's License Photo. Oklahoma schools post warnings of armed staff who will ‘use whatever force is necessary’ N.C. just prosecuted a teenage couple for making child porn — of themselves. (iStockphoto) Is it possible to sexually exploit one’s self? 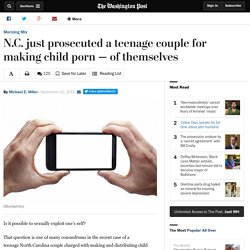 That question is one of many conundrums in the recent case of a teenage North Carolina couple charged with making and distributing child pornography. Oklahoma Breaks a Record: 26 Bills Filed to Attack LGBT Civil Rights. LGBT rights advocates knew there would be a slew of anti-LGBT bills being filed in the United States this year, but a handful of Oklahoma Republicans have really excelled themselves with a thought-to-be record-breaking 26 bills (and more soon to be filed) that could harm LGBT civil rights. 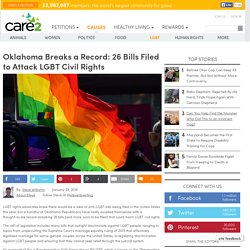 The raft of legislation includes many bills that outright discriminate against LGBT people, ranging in topics from undercutting the Supreme Court’s marriage equality ruling of 2015 that effectively legalized marriage for same-gender couples across the United States, to legalizing discrimination against LGBT people and ensuring that they cannot seek relief through the judicial system. Mississippi Child Care Crisis - Local Government Is Failing Us. The water crisis in Flint is emblematic of a nationwide failure of local government in its most fundamental tasks. 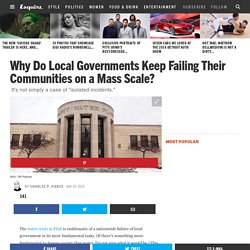 (If there's something more fundamental to human society than water, I'm not sure what it would be.) This often (but not exclusively) occurs in states in which a Republican governor and a Republican state legislature have combined to put the basic Republican philosophy of toothless regulation and what is usually referred to as "limited" government into action. You may wonder to yourself, wait, if the Republican philosophy in general is that it is the states and their governments who are best suited to handle society's problems, and then the state governments abandon or short-change the job themselves, then how do these problems ever get solved? Shut up, he explained. Advertisement - Continue Reading Below. Huffingtonpost.

Huffingtonpost. California has new ebike laws,and I think these will spread. The website “Overvolted.com” is one of the sources of information I check occasionally, and they recently reposted an article by Cameron Newland about changes to California’s ebike laws. 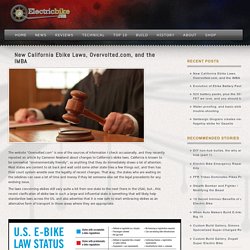 Prosecutors Drop Ridiculous 'Fleeing Police' Charge For Cautious Driver. But Not Before Exposing A Bigger Issue. Last month, DaJuawn Wallace was given a choice: Plead guilty to a crime he didn't commit, or continue to fight the charge and take his chances in the criminal justice system. 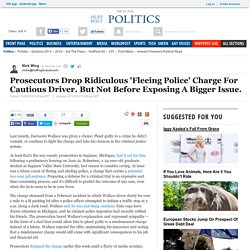 The charge stemmed from a February incident in which Wallace drove slowly for over a mile to a lit parking lot after a police officer attempted to initiate a traffic stop at 2 a.m. along a dark road. Wallace said he was just being cautious. Fake cops have drawn attention in Michigan, and he claimed police impostors had recently robbed his friends. They really are the party of stupid: The real story behind Scott Walker’s war on higher education. At the turn of the last century, the “Wisconsin Experiment” led the nation as a way to develop government policies that would promote the greatest good for the most people. 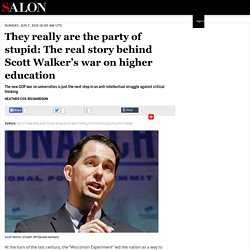 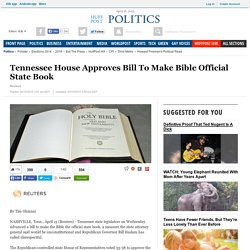 The Republican-controlled state House of Representatives voted 55-38 to approve the Bible as state book. A companion bill could be considered as soon as Thursday in the state Senate, where Republicans hold 28 seats to five for Democrats. Representative Bud Hulsey, a Republican, told colleagues in support of the bill it is worth the fight "now more than ever. " Other Republican representatives opposed the bill, citing concerns about how Tennessee might be perceived and the cost of defending it against legal challenges. Guilty of Being Poor: When a Community Issues Arrest Warrants for More Offenses than It Has Residents, Something's Deeply Wrong.

Kansas Schools Will Close Early This Spring For Lack Of Funds. Two school districts in Kansas announced this week that the academic year would end early because they lack sufficient funding to keep the schools open. Concordia Unified School District will finish up six days early, on May 15, and Twin Valley Unified School District will let students out 12 days early, on May 8, the Associated Press reports. In March, Gov. Sam Brownback (R) signed a school funding overhaul, which resulted in the state's schools losing a combined $51 million meant to help them finish out the current academic year.

Members of the Twin Valley school board cited “the present mid-year, unplanned financial cuts recently signed into law" as a reason for the early shutdown. Florida’s Bathroom Law. (Photo credit: Wikipedia) Elementary Teachers Under Fire After Forcing 'Poop Inspections' On Students. Ranking The States From Most To Least Corrupt. U.S. Attorney Preet Bharara ripped into the political culture in Albany on Thursday during a news conference detailing the arrest of New York Assembly Speaker Sheldon Silver on corruption charges.

Greg Abbott: Abortion Clinic Closures Are Manageable 'Inconvenience' For Women. Texas officials filed a memorandum with the U.S. Supreme Court on Thursday in defense of an anti-abortion law that has shut down 80 percent of clinics in the state, arguing that the law is merely a manageable "inconvenience" -- not an undue burden -- to Texas women. County Won't Pay Medical Expenses For Toddler Hit With Police Grenade. State Bills Family Of Homicide Victim For Nearly $12 Million. ALBANY, N.Y. (AP) — A spokeswoman for the New York state institution where a mentally disabled man's death has been ruled a homicide says officials were obligated to bill the man's estate almost $12 million for his care over 10 years or risk losing federal Medicaid funding. Psychiatrists Deeply Concerned For 5% Of Americans Who Approve Of Congress.