Riding In, On, and Under the High Seas

The World’s First Luxury Superyacht Barge Cruises Canals in Style. You can’t park a superyacht in Paris or Prague. 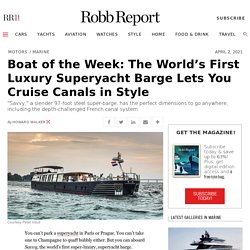 You can’t take one to Champagne to quaff bubbly either. But you can aboard Savvy, the world’s first super-luxury, superyacht barge. Designed to ply the narrow, shallow, low-bridged canals and rivers of Europe in style, Savvy was built back in 2004 by leading Dutch superyacht yard Hakvoort, with a stunning interior by British superyacht specialists H2Design. Meet the New Class of Freshwater Superyachts Bringing Luxury to Lakes. The term “freshwater yacht” was an oxymoron until J. 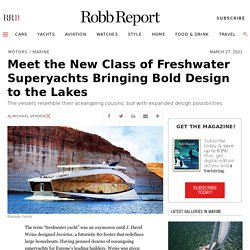 David Weiss designed Invictus, a futuristic 80-footer that redefines large houseboats. Having penned dozens of oceangoing superyachts for Europe’s leading builders, Weiss was given carte blanche by Arizona-based Bravada Yachts to create a new freshwater category. “The designs have typically been boxy, bloated RVs,” he says. This 272-Foot Superyacht Concept Features a Striking Glass-Bottom Pool. The A Group has assembled an A-Team for its newest superyacht concept. 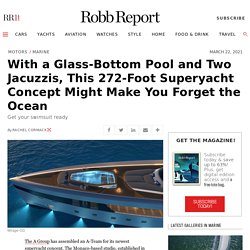 The Monaco-based studio, established in 1985 by Oceanco cofounder Richard Hein, has joined forces with up-and-coming yacht designer Thibaud Le Merdy to create a revolutionary 272-footer known as Project Comète. Thibaud first penned Comète in 2017, the same year he was named BOAT International‘s Young Designer of the Year. And now, with the help of yachting director Matt Pegrum, Thibaud has been able to further refine his vision and bring his dream machine to fruition.

In essence, Comète infuses Thibaud’s fresh blood and new ideas with The A Group’s extensive construction expertise. The vessel features dynamic and elegant lines, as well as a superstructure that blends effortlessly with the hull. The New Sunreef 80 Eco Catamaran Generates Its Own Renewable Energy. Sunreef Yachts has just started building what it’s claiming will be “the world’s most advanced sustainable luxury catamaran.” 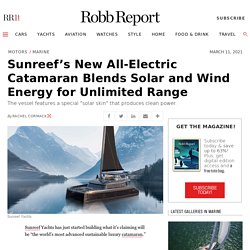 The electric vessel, known as the Sunreef 80 Eco, blends the latest green technologies with the reliability of a day-sailer and the comfort of a superyacht. It was first unveiled last year as part of the Polish yard’s new Eco line that comprises a handful of vessels spanning from 40 to 100 feet. Sarvo Marine. Watch: Lloyd Werft’s 476-foot Superyacht Solaris Hit the Water. Turns out even a foggy February morning can’t stop a certain superyacht from shining. 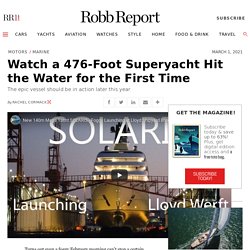 German builder Lloyd Werft recently launched its newest 476-footer from the Bremerhaven yard and it looked nothing short of spectacular even amid a hazy, opaque sky. The sizable vessel, which was christened Solaris, began outfitting in 2018 and is one of the largest superyachts to hit the water so far this year. Triton's Titanic Explorer will reach new depths for luxury bubble-subs.

Florida's Triton has been making high-end civilian submarines for more than a decade now, dividing its sales between scientific explorers, commercial and cinematography clients, and ultra-rich superyacht owners looking to spruce up their wet garages with something more interesting than a jet ski.

The key to Triton's market dominance has been its mastery of the acrylic sphere. Its bubble-subs give drivers and passengers an ultra-widescreen panoramic view of the world under the water, totally free from optical distortion. The hull simply disappears when you're underwater; editors on the BBC's Blue Planet II series couldn't distinguish between footage shot from inside the thick bubble and footage shot from external cameras. You're sitting there thousands of feet under the surface, totally immersed in the undersea world, and yet free to move around in air-conditioned comfort at terrestrial pressure levels. A Beautiful 4K Timelapse of a Boat Traveling the Dutch Waterways From Rotterdam to Amsterdam. 'cascada 34' by igor jankovic is a whale-shaped, solar-powered superyacht. Glasshopper Totally Transparent 1967 for sale for $660 - Boats-from-USA.com. LOEVA OFFICIAL WEBSITE.

The Le StandUp Is a Beautiful Transparent Paddleboard. Pierpaolo lazzarini designs 'avanguardia': a swan shaped mega yacht. Watch This Gargantuan Boat Lift An Entire Cruise Ship Out Of The Water. Sea-Kit’s Robot Ship Maxlimer Aims to Cross the Atlantic Sans Humans. The voyage is expected to take about 35 days and could prove that ships never really needed humans in the first place. 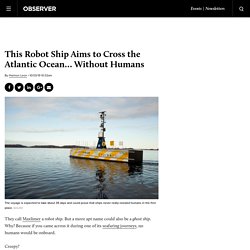 Sea-Kit They call Maxlimer a robot ship. But a more apt name could also be a ghost ship. Why? Because if you came across it during one of its seafaring journeys, no humans would be onboard. Creepy? US Navy boat missing since last year found floating off Ireland coast. A U.S. 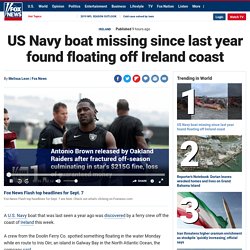 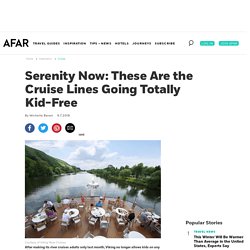 They’re instead focusing their efforts on adult passengers by instituting 18-and-over policies. When Virgin Voyages launches the first of its three cruise ships in 2020—the 2,860-passenger Scarlet Lady—it will require that the kiddos stay ashore by instilling an adults-only policy onboard. “Let’s face it, even parents could use a holiday from their little ones sometimes; to relax, order a glass of wine and dedicate all of their attention to the voyage at hand . . . sans the unpredictability of kids,” Virgin Voyages wrote in a statement on its site. In truth, Viking hadn’t exactly been known as the river cruise line of choice for families and younger travelers so, according to the company, this was just a matter of making its adults-only reputation official.

Virgin Voyages’s First Ship Could Convert Even the Most Cruise-Averse. Cruising can be a polarizing topic among travelers. 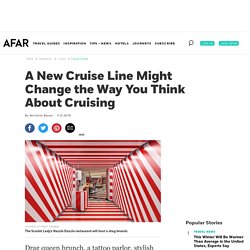 There are hardcore devotees and the adamantly opposed. But leave it to the forthcoming Virgin Voyages—part of the Richard Branson–founded Virgin Group—to completely shake up the way ocean cruising is done to such a degree that even the most cruise-averse might find themselves at least somewhat intrigued. When the 2,770-passenger Scarlet Lady launches in 2020, it will be the first of Virgin Voyages’s three planned cruise ships, and among its features will be a tattoo parlor, for those that want to get inked at sea in true sailor fashion, and a lineup of dining venues that put a new spin on traditional cruise ship cuisine.

“There will be no stuffy formalities, boring buffets and no main dining rooms,” Branson said in a statement. There will also be no extra charges for the ship’s specialty restaurants, no assigned seating, and no assigned dining times. This Live Stream Lets You Eavesdrop on Endangered Killer Whales' Conversations. Yamaha 210 FSH: The Boat That Blew Up the Formula. Anvera 48 - A new way to live the sea. Anvera 55 - A new way to live the sea. Anvera is the result of a ten-year experience accrued in competitions, most notably class 1 Offshore, but also in industrial sectors with a high technology content. This craft is not only lightweight, but also exceptionally resistant and safe; it requires complex and technological design, the use of special materials and attention to the smallest details.

Moreover the used materials include hardly any wood. Discover the advantages of the Anvera construction method. Anvera is built using unidirectional or multiaxial carbon, very thick high-density PVC, and epoxy resin. All these materials are strong, as well as having high resistance to stress and impact. Fuel savingonly 4.9 liters of fuel approximately=1 mile at 40 knots. Pearl Yachts teases debut of stunning new superyacht. British luxury yacht builder Pearl Yachts is taking its first steps into the world of superyachts with its Pearl 95 – a 96-ft (29.2-m) cruiser that's billed as combining seakeeping with the latest in posh living. Created to celebrate the company's 20th anniversary, the ship was designed by Dixon Yacht Design and will make its debut at the Cannes Yachting Festival in September. Pearl Yachts is no stranger to creating sea craft for the upper crust, but until now the company has confined itself to the 60 to 80-ft (18 to 24-m) class.

World's first autonomous shipping company announced in Norway. Last May we heard about the Yara Birkeland, which is planned to be the world's first all-electric and autonomous container ship. When it enters full autonomous control in 2020, it will likely be under the auspices of the just-announced world's first autonomous shipping company, Massterly. The Yara Birkeland is being developed in a partnership between Norwegian chemical company Yara, and Norwegian maritime technology company Kongsberg. Lexus to start selling its luxury Sport Yacht this year. The Lexus Sport Yacht concept was unveiled in January last year, and the one-of-a-kind proof of concept put the automaker's design language to use in a 42-ft (12.7-m) long luxury vessel.

Powered by marine versions of five-liter V8 gasoline engines in the Lexus RC F coupe and LC 500 grand tourer, the concept featured a hull, inner structure and superstructure made from hand-laid carbon-fiber fabric, vacuum-infused with two-part polyurethane resin. Lexus says this composite enabled it to trim 2,200 lb (1,000 kg) off the vessel's weight when compared to glass fiber hulls. The production version sees the yacht's length stretched out to 65 feet (20 m), with enough entertainment space for 15 guests and luxury staterooms hidden away below deck.

It will feature connected services for things like security, smartphone integration and remote diagnostics. Further technical details will be announced down the track, with sales to kick off in the second half of the year. Safehavenmarine. XSV 17 Principle dimensions / characteristics L.O.A. 17.8m / 59ft Hull length 16.3m / 53ft 6" See inside the historic World War II-era aircraft carrier that was hit by 4 Japanese kamikazes and a torpedo and served in the Vietnam War.

2015 MTI RACING BOAT - 215473. Peugeot and Benetau collaborate on Sea Drive concept. Radical America's Cup concept promises faster, safer yacht racing. Defending champions Emirates Team New Zealand got together with challenger Luna Rossa over a period of four months to look at a variety of monohull concepts for their upcoming tussle. SAFE Boats, American Makers of Military Vessels. AFE Boats International (SAFE stands for Secure All-around Flotation Equipped) is a marine manufacturer in the Puget Sound area. Some of their clients include military (U.S. Navy, U.S. Marine Corps. and U.S. Air Force), federal agencies (U.S. Department of Homeland Security, U.S. Wave Chaser refines its catamaran-style craft into the 390 ZF. Man attempts to "walk" across Irish sea in a human hamster wheel. Thirty-five year old Chris Todd has attempted to “walk” across 106 kilometers (66 miles) of open sea in a giant hamster wheel-like raft dubbed Tredalo. Unfortunately, the plan to cross the Irish Sea – leaving from Wales and arriving on the east coast of Ireland in the South of Dublin – didn’t quite go to plan.

Harsh weather conditions forced Todd to abort the mission after approximately eight and a half hours and 42 kilometers (26 miles) into the journey, when he encountered rudder problems. View all. Sail the mighty Amazon River onboard a 147-foot-long floating hotel. Sailrocket runs 65.45 knots (75 mph) to smash World Speed Sailing Record. Super Aircraft Carriers and their Parts" USS Boxer (CV-21) Commissioned too late to see any combat in World War II, Boxer spent much of her career in the Pacific Ocean seeing 10 tours in the western Pacific.

Products Archivo - Onean. Cnet. The Herculean Effort Required to Pull the Baltic Ace Up From the Bottom of the Sea. Tetrahedron super yacht appears to fly above the surface of the sea. Orsos Island - the smallest personal floating island yet in a fast growing market. Building A Cruise Ship. Royal Navy's self-driving speedboat takes to the Thames. Luxury solar yacht is just as spectacular as we anticipated. Sunseeker’s ‘Black and White’ Motor Yacht Now Chartering for $101K a Week. Rolls-Royce-powered Aeroboat S6 brings speed and luxury.