As birth rates fall, animals prowl in our abandoned 'ghost villages' For many years it seemed that overpopulation was the looming crisis of our age. 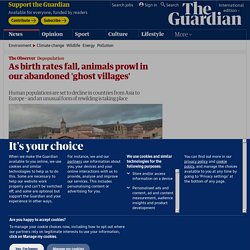 Back in 1968, the Stanford biologists Paul and Anne Ehrlich infamously predicted that millions would soon starve to death in their bestselling, doom-saying book The Population Bomb; since then, neo-Malthusian rumblings of imminent disaster have been a continual refrain in certain sections of the environmental movement – fears that were recently given voice on David Attenborough’s documentary Life on our Planet. At the time the Ehrlichs were publishing their dark prophecies, the world was at its peak of population growth, which at that point was increasing at a rate of 2.1% a year. Since then, the global population has ballooned from 3.5 billion to 7.67 billion. But growth has slowed – and considerably. Visualizing the World Population in 2100, by Country. Alongside potential obstacles such as job loss, financial insecurity, and a subsequent inability to cover many upcoming bills, many Americans are now facing potential home loss as well. 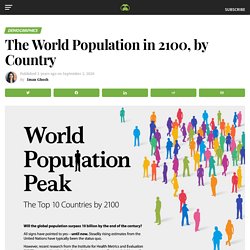 According to a recent survey by the U.S. Census Bureau, of the estimated 17 million adults who are not current on their rent or mortgage payments, a whopping 33% of them could be facing eviction or foreclosure in the “next two months”. Note: While this survey was conducted Nov 11-23, 2020, respondents’ interpretations of “the next two months” ranged between Nov 2020–Jan 2021. The Myth of Overpopulation. Kit Knightly In his latest, “Mouse Utopia and the Blackest Pill”, James Corbett takes aim at perhaps the most insidious propaganda narrative of all, and one that is very close to my heart: Overpopulation. 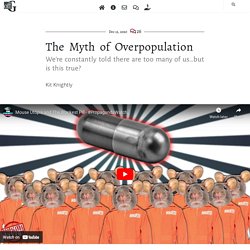 This has been a personal bugbear of mine since I grew old enough to detect subtext, but long before I could articulate exactly why: The pervasive and destructive idea that there are too many people. A propaganda construct that seeks to create contempt for masses of ordinary people, whilst excusing hubristic and inhumane practices by institutions and elites. These destructive belief systems have come to the fore during this “pandemic”, made obvious by the fevered gleeful enthusiasm with which so many took up the narrative. One UN representative claimed the coronavirus was Earth “sending us a message”.

Back in April, the South China Morning Post ran an article headlined: Why Covid-19 is a human overpopulation problem – perhaps humans are the virus? The Population Race: A 300-Year Look at China vs. India. Every day, the Information Age bombards us with massive amounts of data. 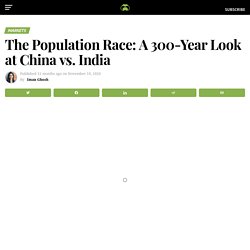 Experts now estimate that there are 40 times more bytes of data in existence than there are stars in the whole observable universe. And like the universe, our datasphere is also rapidly expanding—and every few years, there is actually more new data created than in all prior years of human history combined. Searching for Signals On a practical level, this dense wall of impenetrable data creates a multitude of challenges for investors and decision makers alike: It’s mentally taxing to process all the available information out thereToo much data can lead to “analysis paralysis”—an inability to make decisionsMisinformation and media slant add another layer for our brains to processOur personal biases get reinforced by news algorithms and filter bubblesData sources—even quality ones—can sometimes conflict with one another As a result, it’s clear that people don’t want more data—they want more understanding. 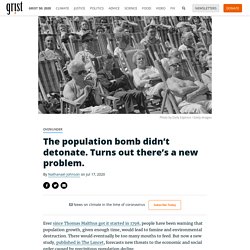 The world population is now 7.8 billion, up from 3.5 billion less than 50 years ago. Previous estimates suggested we wouldn’t reach “peak humanity,” the point at which things start going to hell, for generations. Landmark report predicts “profound” shifts in fertility by 2100. According to the findings, the world is primed to undergo a massive overhaul in the way we move, reproduce, and work due to widespread declining fertility rates. 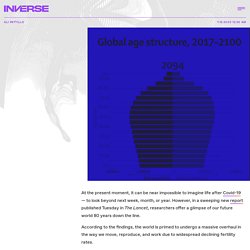 The global total fertility rate (TFR) — a metric that captures the average number of children a woman has over her lifetime — is predicted to steadily decline. Philadelphia Magazine. Why the former USSR has far fewer men than women. In our map above, countries depicted in the darkest blues have far fewer men than women – and the former Soviet Union stands out from the rest of the world. 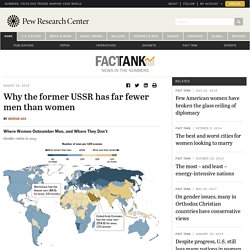 This region has been predominantly female since at least World War II, when many Soviet men died in battle or left the country to fight. In 1950, there were just 76.6 men per 100 women in the territory that is now Russia. G7 nations stand out for their low birth rates, aging populations. World population growth is expected to nearly stop by 2100. For the first time in modern history, the world’s population is expected to virtually stop growing by the end of this century, due in large part to falling global fertility rates, according to a Pew Research Center analysis of new data from the United Nations. 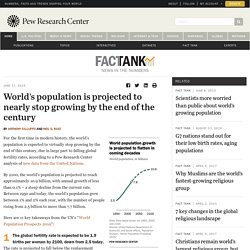 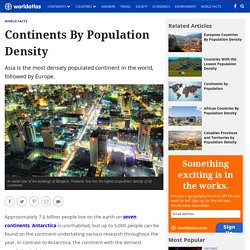 Countries With the Lowest Population Density. Population density is calculated by the average number of people in an area or the number of individuals per unit area. 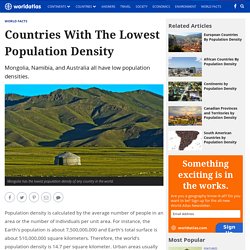 The highest growth rate ever experienced was from 1965 to 1970 when it grew by 2.06%. From 2010 to 2015, it reduced to 1.18%, and it is expected to decrease further during the 21st century. The population growth rate varies with each country with some big nations by land size having a smaller percentage share of the global population like in the case of Russia and Canada while others smaller countries like Nigeria ranking among the most populous nations. Countries With The Largest Aging Population In The World. The world is aging rather rapidly. However, there are a few countries, such as Japan and Italy, that stand out from among the rest, due to the immense proportions of their citizens over 65 years of age. According to the World Health Organization, nearly two billion people across the world are expected to be over 60 years old by 2050, a figure that’s more than triple what it was in 2000.

Because of such increases in their aging populations, some of the world’s largest economies have started facing subsequent increases in their health-care costs, higher pension costs, and a decreasing proportion of their respective citizenries active in the workforce. A major contributing factor to this trend has been diminishing fertility rates in these countries in recent decades, further compounded by longer lifespans. In order to adapt to their increasingly aging populations, many countries have raised the retirement age, reduced pension benefits, and have started spending more on elderly care. Countries With The Biggest Population Decline. The United Nations projects that the world’s population will reach 9.7 billion by 2050 before peaking at 11.2 billion by 2100. As many people are stunned by these figures, the truth is that the world's population growth is not evenly distributed.

While many countries have populations that are increasing, whether it be gradual or quick, there are a handful of countries whose populations are actually shrinking. These countries are discussed below. Countries With a Declining Population Andorra (-3.61%) Andorra, a small mountainous country sandwiched between France and Spain, only has a population of 77,821 people to begin with. Syria (-2.27%) Syria's population loss has been largely due to the Syrian Civil War, a brutal war that has been ravaged in the country since 2011. Lithuania (-1.63%)