I’m a Chess Expert. Here’s What ‘The Queen’s Gambit’ Gets Right. Despite the efforts to make the chess scenes believable, there are still areas in which the series comes up short. 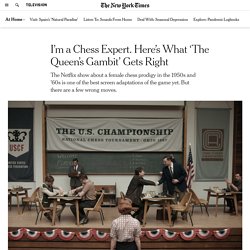 The most apparent is in how fast the players move during the tournaments. As one tournament director tells Beth before a competition in Cincinnati, each player has two hours to make 40 moves, which was, and still is, a standard time control for such games. But in every match, Beth and her opponents make each of their moves after taking only a few seconds to think about them. At such a tempo, they would finish their games in minutes, not hours. The speed is understandable for filmmaking because watching players sit at a board for hours, barely moving, is not riveting.

Nor is having competitors talk during some of the games. There is also a curious moment when Harry compares Beth to Paul Morphy, an American, who played that famous game at the Paris Opera in 1858 and who is widely considered the greatest player of the 19th century. After Carlsen's Victory, Questions for Chess, and for the Champion.

By Steve Gardner Magnus Carlsen and Fabiano Caruana faced off for the World Chess Championship over three weeks London. 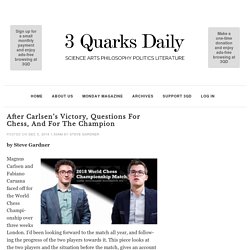 I’d been looking forward to the match all year, and following the progress of the two players towards it. This piece looks at the two players and the situation before the match, gives an account of the Championship games, and concludes with some reflections on the significance of the match for the participants, and for the sport. Before the Match The Challenger – Fabiano Caruana. Magnus Carlsen Is, Again, The World Chess Champion. Over his last 24 regulation games at a world championship, Magnus Carlsen has won only one of them. 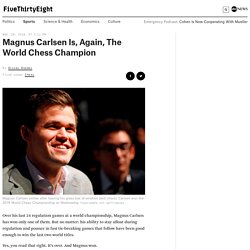 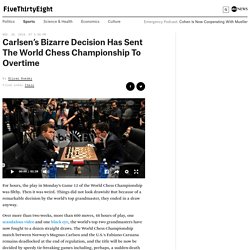 Then it was weird. Things did not look drawish! But because of a remarkable decision by the world’s top grandmaster, they ended in a draw anyway. Over more than two weeks, more than 600 moves, 48 hours of play, one scandalous video and one black eye, the world’s top two grandmasters have now fought to a dozen straight draws. Armageddon Looms Over The World Chess Championship After Magnus Carlsen's Shocking Decision. 'Has She Gone Mental?' A Queen's Gambit Leaves Chess World Baffled. Hou Yifan of China stands beside a scoreboard following her win in a "blinfold" chess tournament at the Beijing 2012 World Mind Games in Beijing. 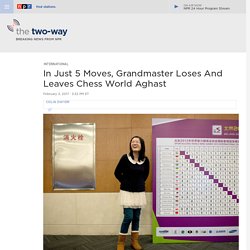 How to Open Well in Chess. If you strive to have expertise in any portion of a chess game, make it the opening. 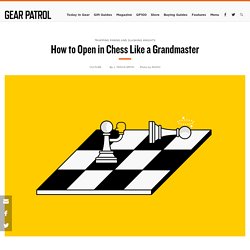 If you’re inexperienced, then it’ll be all anyone remembers before you get frustrated and overturn the board after a misstep with the queen. At family gatherings it’ll impress the relatives — like juggling or being able to sew on a button. But more seriously, faced with a blank board, like an artist looking at a blank canvas, amateurs can frequently suffer from chessblock, making the game a challenge instead of a lasting, cross-cultural battle of ingenuity. Late in the game, once the majority of the pieces are in close quarters, many moves will be dictated completely by responding to an attack or making one of your own.

By contrast, at the opening there is wiggle room, and thus some help is handy. Birthday Present: Magnus Carlsen Retains The World Chess Title In Style. Ruy Lopez. The Ruy Lopez (/rʊ.ɪ ˈloʊpɛz/; Spanish pronunciation: [ˈruj ˈlopeθ/ˈlopes]), also called the Spanish Opening or Spanish Game, is a chess opening characterised by the moves: 1. e4 e5 2. 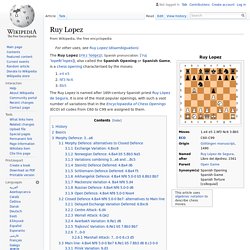 Nf3 Nc6 3. Interview: Director of Chess Documentary "Magnus" Of the 150+ films that screened at the Tribeca Film Festival last month, the one that sold out the fastest was about chess. 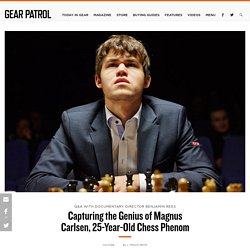 Magnus, the product of 500 hours of footage edited down to 75 minutes over the course of a year, tells the story of chess Grandmaster Magnus Carlsen from his childhood until the present day. Its climax is set in India at the 2013 World Chess Championship, where Carlsen plays Viswanathan Anand, at the time a 43-year-old Indian Grandmaster, who represents machine and preparation, using computers extensively in his training; the young Norwegian, Carlsen, forgoes computers and any classical training for playful, creative and intuitive play. It’s a battle of computing versus human intuition, played out in one of the most enduring games on Earth. The first film about Carlsen was The Prince of Chess, a 2005 film about Carlsen back when he was just the youngest player to become a chess Grandmaster. 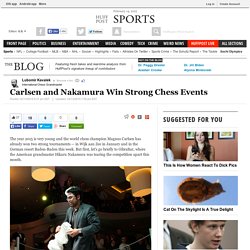 But first, let's go briefly to Gibraltar, where the American grandmaster Hikaru Nakamura was tearing the competition apart this month. The United States have two chess players rated in the world's top 10 and they intend to push each other to get even better. The Chess Phoenix Rises Again  Vishy Anand could be the Phoenix of Chess. 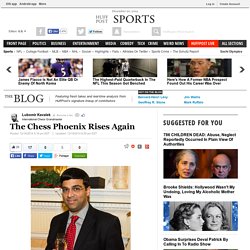 Many times down, but never out. Again and again he rises up to snatch another tournament triumph, another world championship. Last year Anand lost the world title to Magnus Carlsen, but came back this year and won the Candidates to play the Norwegian again. Before the world championship in November, Anand won a strong event in Bilbao, but could not wrest the title back from Carlsen and lost the match. Carlsen outplayed. Fabiano Caruana rocked the chess world on Friday when he defeated the world champion, Magnus Carlsen, to maintain his perfect start to the 2nd Sinquefield Cup. He has established a 1.5-point lead after just three rounds. All three games in the third round ended decisively. Maxime Vachier-Lagrave got back to 50 per cent by outplaying Levon Aronian, whose position deteriorated every time he grabbed another pawn. US number one Hikaru Nakamura missed a win against Veselin Topalov and was crushed as his lapse allowed the Bulgarian to aim rook, queen, knight and two bishops at his king.

Why did White resign? This 22-Year-Old Just Rocked the Chess World with "Historic" Win. If we don't get a hyper-nationalistic Disney movie out of this that isn't basically a Rocky IV meets Big Bang Theory mashup of a bunch of jingoistic and inaccurate stereotypes, I'm going to be really pissed off. Only one teensy-weensy problem: Caruana's Italian (even though he was born in Miami). It would be as if Rocky 4 featured Ivan Drago against the Chinese boxing champion. You really think that when we show him the money he could earn from a movie deal, that he won't renounce his citizenship in that debt-ridden backwater shithole of a country? Did you not even look at the picture and see the italian flag and the fact it said italy beside his name as he is Italian. Also "best you at your own game'' chess is not a holy european game alot of its orgins are from asia . so what the hell are you talking about is that how desperate things have got in america ?