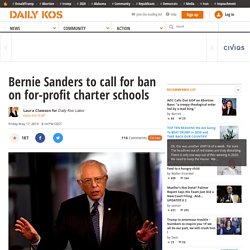 Bernie Sanders will unveil a major plan to support public education and rein in privatization on Saturday, CNN reports. Sanders will call for a ban on for-profit charter schools and pledge that, as president, he would refuse to use federal funds to open new charter schools. On the anniversary weekend of Brown v. Board of Education, Sanders will take up the NAACP’s call for a moratorium on charter school expansion, at least while the schools are audited. Sanders will also propose subjecting charter schools to the same oversight as public schools—something that charter backers have oh-so-mysteriously fought tooth and nail—and transparency measures like financial disclosure and student attrition rates.

Sanders isn’t stopping there. While some charter schools are locally run and were started with decent intentions, their spread is attributable to corporate chains, millionaire and billionaire backers, profiteers, and people looking to undermine public education. 5 Times Bernie Sanders Mopped the Floor with Ted Cruz During Their CNN Debate. Photo Credit: CNN/YouTube For Never-Trumpers and Berniecrats alike, CNN's Future of Obamacare summit between Sen. 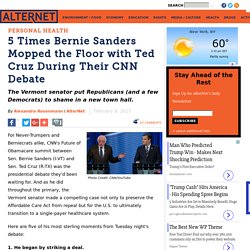 Bernie Sanders (I-VT) and Sen. Ted Cruz (R-TX) was the presidential debate they'd been waiting for. And as he did throughout the primary, the Vermont senator made a compelling case not only to preserve the Affordable Care Act from repeal but for the U.S. to ultimately transition to a single-payer healthcare system. Here are five of his most sterling moments from Tuesday night's debate: 1. "If you're willing to look at taking on pharma, which is the greediest of many, really corporate interests in Washington... "I voted with you in support of allowing drug re-importation, it was the right thing to do," Cruz recalled. The bill was ultimately killed by 13 Democratic senators who voted against it. 2. Bernie Sanders can't fulfill the debate promise he just made on mass incarceration. Darren Hauck/Reuters After a number of Democratic debates in which criminal justice got barely any air time, Bernie Sanders and Hillary Clinton spent several minutes agreeing with each other Thursday night about holding police officers accountable for criminal misconduct, getting rid of racial disparities in sentencing, and bringing down the prison population. 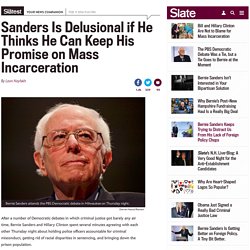 Leon Neyfakh is a Slate staff writer. On this last point, Sanders trotted out an absurd promise he has used several times before: that by the end of his first term, the United States will no longer be the world leader in incarceration. What Sanders means by this is that under just four years of his magical leadership, the U.S. will bring down its jail and prison population by about 600,000 people. Bernie Sanders Repeatedly Scolded For Attempting To Unionize Debate Moderators. Bernie Sanders gets slimed by the New York Times: This is what a smiling, condescending hit job looks like. On the fourth of July, the New York Times gave its readers a first extended look at the political history of Bernie Sanders in Vermont. 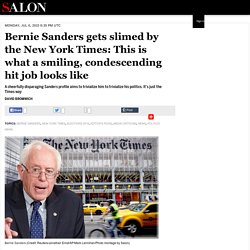 The article, by Sarah Lyall, is titled “Bernie Sanders’s Revolutionary Roots Were Nurtured in ’60s Vermont.” This sketch of the young Sanders is free of obvious malice. It would serve its purpose less effectively if it were malicious. The attitude that Lyall adopts toward Sen. Sanders is, instead, mildly and cheerfully disparaging — affectionate, but at the proper distance of condescension; ironically agreeable, as you are allowed to be in dealing with a second cousin or an eccentric uncle who is a bit of a blowhard.

Though malice is absent, the pejorative shading here begins with the title. Symptomatic excerpts from the article follow in boldface, with my comments below: “[The young Bernie Sanders] came to Vermont in the late 1960s to help plan the upending of the old social order.” Labor Leader Joins Bernie Sanders' Campaign, Citing Clinton's 'Silence' On Fast Track. WASHINGTON -- The longtime leader of one of the country’s most powerful labor unions is joining the Democratic presidential campaign of Sen. 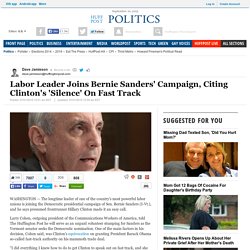 Bernie Sanders (I-Vt.), and he says presumed frontrunner Hillary Clinton made it an easy call. Larry Cohen, outgoing president of the Communications Workers of America, told The Huffington Post he will serve as an unpaid volunteer stumping for Sanders as the Vermont senator seeks the Democratic nomination. One of the main factors in his decision, Cohen said, was Clinton’s equivocation on granting President Barack Obama so-called fast-track authority on his mammoth trade deal. “I did everything I knew how to do to get Clinton to speak out on fast track, and she wouldn’t,” said Cohen, whose 10 years leading CWA came to an end in June. "We begged her to speak out. “There was a million ways she could have done it. ...

Labor unions, environmental groups and most Democrats rallied against giving Obama fast-track authority on the Trans-Pacific Partnership. Bernie Sanders & Cornel West: The radical alliance that could change everything. Senator Bernie Sanders’ presidential campaign is already enjoying success that few could have predicted. 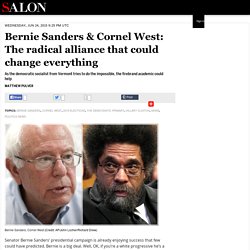 Bernie is a big deal. Well, OK, if you’re a white progressive he’s a big deal. Otherwise, you may have no idea who he is, according to reporting this morning in the New York Times. The Times‘ Patrick Healy and Jonathan Martin write that “black voters have shown little interest in [Sanders]” and that “[e]ven his own campaign advisers acknowledge that Mr.

Sanders is virtually unknown to many African-Americans, an enormously important Democratic constituency.” But as his presidential campaign gains altitude and attention, Sanders may be on the way to securing the most difficult black progressive endorsement there is: the blessing of Professor Cornel West, one of America’s leading public intellectuals. Speaking with Grit TV’s Laura Flanders in early June, the black academic icon was asked by the host if he will be supporting the increasingly popular candidate for president.