Could AI Help Slow the Spread of the Coronavirus? A new machine learning approach to COVID-19 testing has produced encouraging results in Greece. 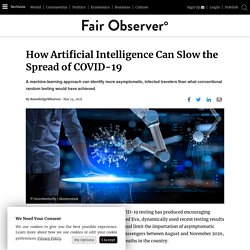 The technology, named Eva, dynamically used recent testing results collected at the Greek border to detect and limit the importation of asymptomatic COVID-19 cases among arriving international passengers between August and November 2020, which helped contain the number of cases and deaths in the country. The findings of the project are explained in a paper titled “Deploying an Artificial Intelligence System for COVID-19 Testing at the Greek Border,” authored by Hamsa Bastani, a Wharton professor of operations, information and decisions and affiliated faculty at Analytics at Wharton; Kimon Drakopoulos and Vishal Gupta from the University of Southern California; Jon Vlachogiannis from investment advisory firm Agent Risk; Christos Hadjicristodoulou from the University of Thessaly; and Pagona Lagiou, Gkikas Magiorkinis, Dimitrios Paraskevis and Sotirios Tsiodras from the University of Athens.

Collaboration is key to AI-aided drug discovery. Your smartphone’s AI algorithms could tell if you are depressed. Depression is a huge problem for millions of people, and it is often compounded by poor mental-health support and stigma. 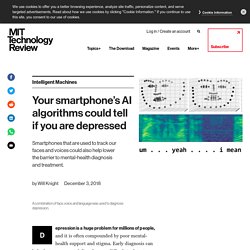 Early diagnosis can help, but many mental disorders are difficult to detect. The machine-learning algorithms that let smartphones identify faces or respond to our voices could help provide a universal and low-cost way of spotting the early signs and getting treatment where it’s needed. In a study carried out by a team at Stanford University, scientists found that face and speech software can identify signals of depression with reasonable accuracy. The researchers fed video footage of depressed and non-depressed people into a machine-learning model that was trained to learn from a combination of signals: facial expressions, voice tone, and spoken words. The data was collected from interviews in which a patient spoke to an avatar controlled by a physician. In testing, it was able to detect whether someone was depressed more than 80% of the time.

Sciencemag. Some public health problems are so large you can see them from space. 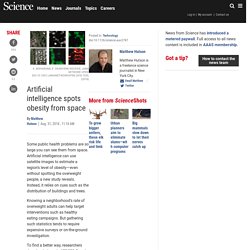 Artificial intelligence can use satellite images to estimate a region’s level of obesity—even without spotting the overweight people, a new study reveals. Instead, it relies on cues such as the distribution of buildings and trees. Knowing a neighborhood’s rate of overweight adults can help target interventions such as healthy eating campaigns. But gathering such statistics tends to require expensive surveys or on-the-ground investigation. To find a better way, researchers downloaded nearly 150,000 Google Maps satellite images of 1695 census tracts (basically neighborhoods) in four cities: Los Angeles, California; Memphis, Tennessee; San Antonio, Texas; and the Seattle, Washington, area.

In the end, the researchers could estimate an area’s obesity rate even better than they could with separately available stats such as the number of gyms and restaurants, they report today in JAMA Network Open. A bot crawled thousands of studies looking for simple math errors. The results are concerning. Software objectively assesses children's pain levels. It's important to know how much pain young hospital patients are experiencing, and not just because no one wants them to suffer – additionally, excessive pain can indicate problems that need addressing. 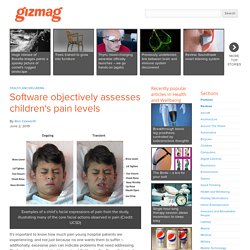 That's why scientists at the University of California, San Diego School of Medicine have developed facial pattern recognition software that objectively assesses children's pain levels based on consistent indicators. Traditionally, caregivers ask children to rate their pain on a level of 0 to 10. This can be a problem with patients who aren't coherent, however, and is particularly challenging with younger children who can't yet grasp the concept of numerical ratings systems. Parents or nurses are often asked to provide an estimate of the child's pain level in such situations, although the accuracy of such an approach is certainly far from perfect. Additionally, parents may not be on hand when an assessment is needed.

"Robot scientist" Eve to save time and money in drug development. Modern pharmaceuticals are a wonder of our age, but they also take years to develop at incredible cost. 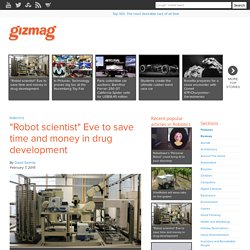 To shorten development time and increase economy, scientists at the Universities of Cambridge and Manchester have built Eve, an artificially-intelligent "robot scientist" that is not only faster and cheaper than its human counterparts, but has already identified a compound that could be used to fight malaria. According to the University of Cambridge, pharmaceutical research is stuck in a terrible bottleneck. It can take 10 years and US$1 billion to create a new drug – time during which many people continue to suffer and that money needs to be recouped somehow. It's for this reason that drugs for fighting many diseases like malaria are lacking and "orphan" drugs, which would help only a handful of people aren't aggressively pursued.

Eve is based on Adam, a robot scientist developed in 2009 by the Universities of Aberystwyth and Cambridge. The video below shows Eve in action. Share.